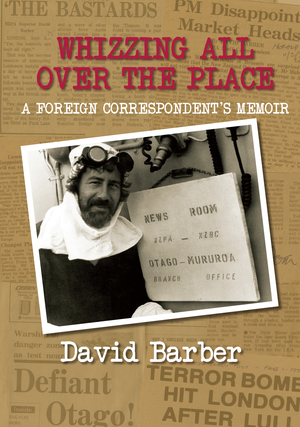 Whizzing All Over the Place: A Foreign Correspondent's Memoir by David Barber Photo: Steele Roberts

7:12 A Lifetime in News
reminiscing on David Barber's memorable experiences from a 60 year career in journalism; his recently published book is Whizzing All Over the Place - A foreign correspondent's memoir...

7:30 Spectrum - The Town That Wouldn't Lie Down
New Zealand people and their stories

8:43 Nights' Overseas Reports - England
formerly of RNZ's Morning Report team, breakfast producer at BBC Radio Brighton Will Flockton reports from England, which is (the greater) part of the United Kingdom, pop. 53,012,456 (est. 2011)... Sussex born Tim Peake is a European Space Agency astronaut living and working on the International Space Station; Rotorua born Dylan Hartley is named captain of the English Rugby Team; unfreezing football pitches; and an armadillo at a Sussex Zoo has had to go on a diet...