The rise of music streaming has created a bunch of new ways for musicians to get their music heard, but some of them aren’t quite what they seem. 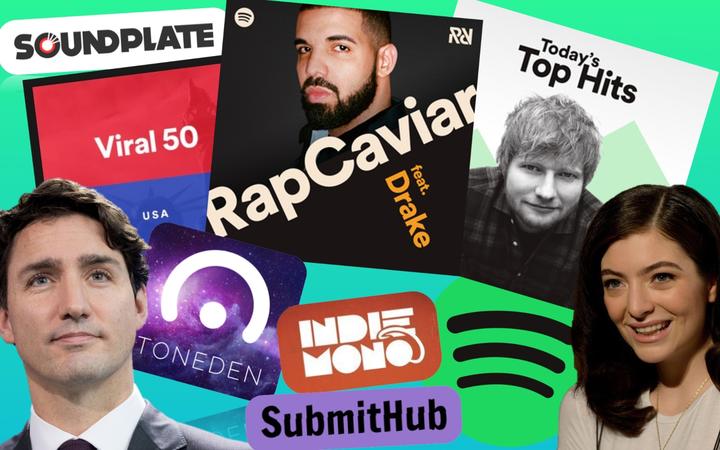 Music streaming in New Zealand has driven a 40 million dollar increase in recorded music revenues in just five years. It’s not hyperbole to say it’s saved the music industry. Streaming is one of the reasons major labels are signing local artists again.

So how do musicians get their music heard above the noise?

The power of playlists is undeniable.

Spotify has a bunch of official playlists, some of which have millions of followers: ‘Today’s Top Hits’ has 23 million, and hip hop playlist ‘RapCaviar’ has 12 million.

Then there's the large number of user-curated playlists, which can have followers in the tens of thousands: Lorde's playlist ‘Homemade Dynamite’ has 64 thousand followers, and Justin Trudeau’s ‘PM Mix’ has 20 thousand.

Getting your song on one of these popular playlists can lead to money, and even fame, but how to get there isn’t clear.

Last year, a Kiwi rapper (who I've chosen not to name here) got a huge surge in streams after being added to a number of official U.S. playlists, but one of them looked fishy.

The playlist was curated by a user called Kolibri Music, who was clearly trying to pass it off as the real thing. 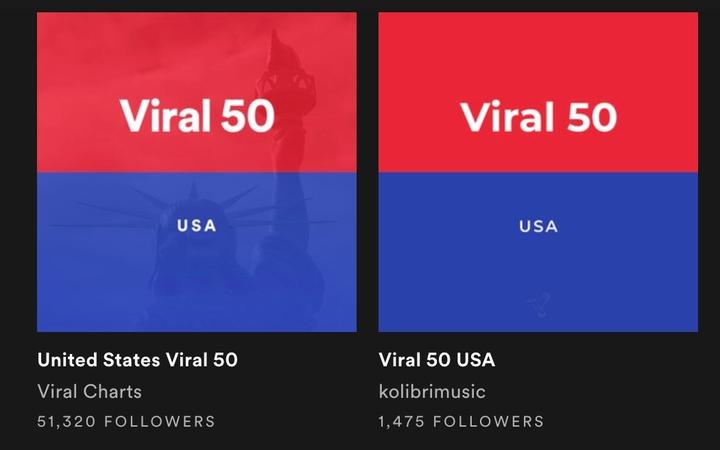 Their playlist included many legitimately popular artists (including that local rapper I mentioned), but it also included some unusual ones – the playlist was recently topped by a Canadian pop singer called Kayleigh, even though she only had 18 followers at the time.

I got in touch with her to find out what was going on.

It turned out Kayleigh had uploaded her song to a website called Submithub, which submits songs to a variety of playlist curators.

Musicians sign up and get two free submissions, and are then encouraged to pay for what’s called “premium credits” to get their song in front of more curators.

The playlist curators get paid for each song they consider, with a percentage going to Submithub. Although the amounts may be relatively small, they’re making money from each and every submission.

Kayleigh paid a small amount and ended up on Kolibri Music’s unofficial “Viral 50 USA” playlist, where she gained 107 new listeners.

Sounds like an okay deal, but I wanted to find out more.

I decided to use my own band, Fever Party, to experiment. I signed up and got my two free credits, then chose two Spotify curators to submit to. I instantly got a rejection email from a curator called ‘Ola's Kool Kitchen’.

I also did a quick search on Kolibri Music (the ones who’d created the unofficial “Viral 50 USA” playlist) and found I could submit songs directly to them, bypassing Submithub completely.

Another curator, Indiemono, allowed direct submissions, seemingly at no cost, but it appeared to be just another portal to Kolibri, with ToneDen again asking for permissions to my Spotify account.

Next up, Soundplate. This seemed to be a different website, although they did use one of the same stock images as Kolibri for their "Future First" playlist, which at the very least seemed lazy. 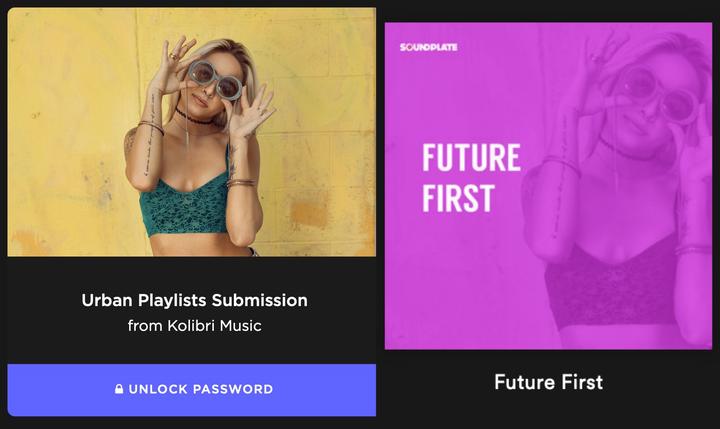 It was becoming clear that curators who allowed free, direct submissions, were gaming the system in order to increase their own followers, making their playlists appear more popular to people using paid services such as Submithub.

I wanted to find out if paying money made a difference – it had worked for Kayleigh.

I roped in my friend Brad from a band called Crème Jèan, and we kicked things off by spending $30 on Submithub.

The flurry of rejection emails was immediate. Each was a form letter, with no indication that an actual human had even listened to the track. Not a good start.

We decided to waste a few more dollars.

A playlist curator called For The Love Of Bands required submitters to listen to their playlists and write a blurb about one of the bands, as well as ‘buy them a coffee’, aka pay two dollars, to have their song considered faster.

This time Brad received a personal email response, saying that his submitted song was rejected, but that another track from the album had been put on three different playlists.

Success! Not quite… Their ‘New Music’ playlist had over 4,500 followers (decent, though small compared to official Spotify playlists), but included a long, disparate collection of acts. It was no surprise when it only generated around a dozen new listeners for Créme Jéan.

For The Love Of Bands’ ‘90 Minutes Rising Indie Mixtape’ was more focused on indie rock and worked better, delivering over 135 new listeners. 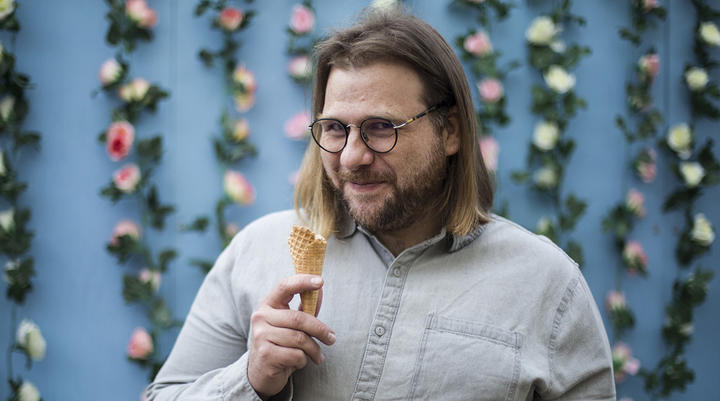 But these numbers are still tiny – especially considering how many streams an artist needs to make any real money. A stream might return half-a-cent (optimistically), so 1,000 streams might return $5.

So why spend thirty bucks on getting a few measly listens on these largely unofficial Spotify playlists?

Musicians would be better off trying to get their songs on local playlists by curators they already have relationships with.

For a start, it’s easier to get access to these playlists’ curators, but – importantly – their subscribers are far more likely to attend shows, follow the band, or buy their merch.

It seems unlikely that the listeners Créme Jéan gained from For The Love Of Bands' playlists are as valuable as the ones they gained from local playlists. Playlists by curators such as RNZ Music, 95bFM, and Under The Radar. 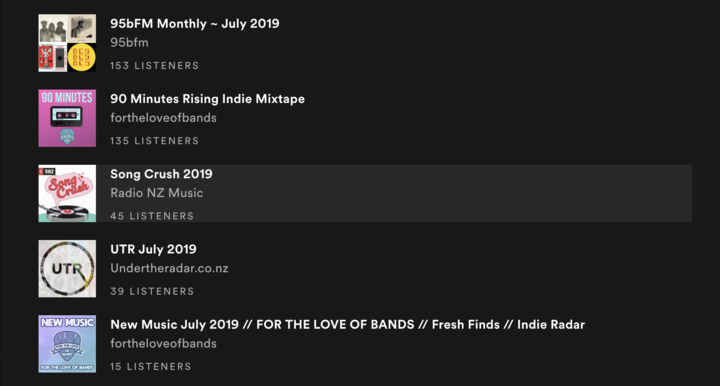 Créme Jéan's music has just been added to the playlist for Auckland festival Others’ Way (they’re on the line-up), tying their music to a real-world event that listeners can attend.

Even the official Spotify and Apple Music playlists for New Zealand aren’t too far out of reach. They’re put together by an actual team of people (based in Australia), and NZ On Air already does its best to make sure they’re aware of local acts who’re on the rise.

The types of things that’ll get the attention of these playlists’ curators are similar to the requirements for NZ On Air music funding: having over 1,000 fans on any one social platform, headlining a show with an audience bigger than 100, featuring on a “substantial” music blog.

If an act’s music doesn’t fit the genre confines of existing playlists, then why not go DIY? Bands could work together to make playlists that feature one another’s music; they could run Facebook groups for fans of their genre.

Bands have been supporting each other like this for ages – playing shows together, releasing double EPs – this is just a digital version of the same thing.

Building an audience in the digital space requires a dedicated effort. The route to success is the same as it’s always been – record great songs, create striking artwork and music videos, play well-attended live shows, and build good networks.

Like so many things, anyone who says they’re offering an easy route to success for a small cost is probably ripping you off.

Thanks to NZ Musician editor Silke Hartung for her help with this story.