REVIEW: The Breeders live at The Powerstation

The Phoenix Foundation’s Samuel Flynn-Scott went to see 90s grunge legends The Breeders perform at Auckland’s Powerstation last night, and he loved every single moment of it. 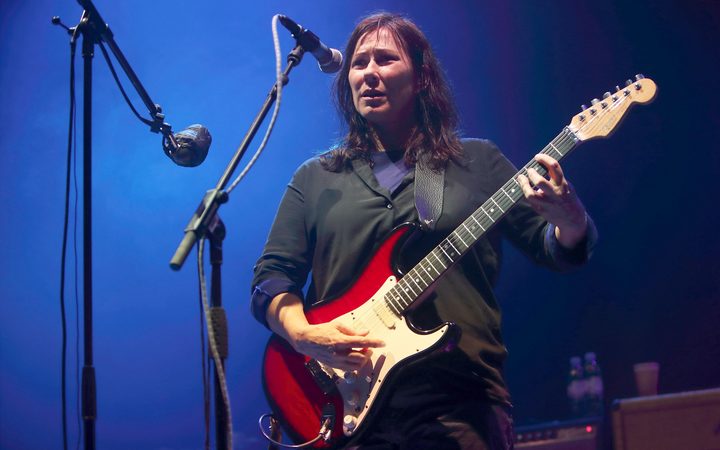 Kim Deal of The Breeders performing at London's Roundhouse in May Photo: Burak Cingi

The Breeders were the first band I went to of my own volition. I told my mum I was going with a group of friends, but I wasn’t. I went by myself; a lost, overwhelmed, mind-blown 14-year-old.

The second time I saw them was about 15 years later. They played ‘Gigantic’ and I cried. I first heard that song when I was 12. It opened some portal to the underworld. It was impossible music to explain to my friends at Wellesley Preparatory School For Boys, and I liked that.

Tonight’s show is the last of their All Nerve tour. The line-up is the same as the classic Last Splash one I saw as a kid in 1994. I fear I have built it all up in my head too much and the whole thing could be a colossal letdown. It’s not.

The ‘94 gig was a side show for NZ’s first ever Big Day Out. The Breeders, Smashing Pumpkins and Christchurch band Cinematic performed at the Wellington Town Hall. In some weird full-circle kismet, Cinematic frontman Jeremy Taylor (who’s also a music reviewer for RNZ's Nine to Noon) is coming to the show with me tonight. 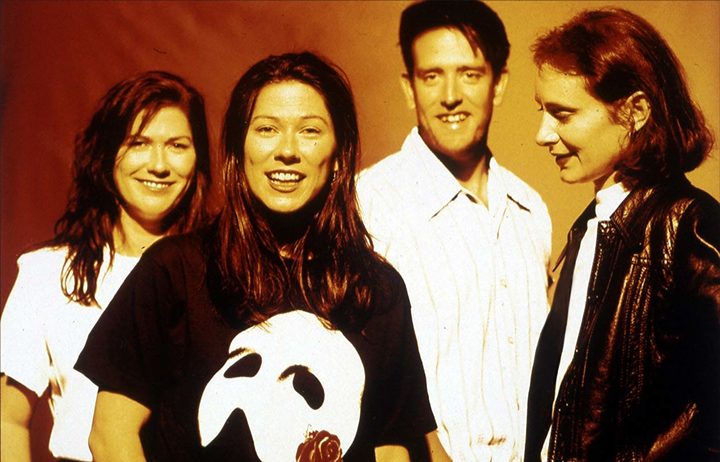 The Breeders during the Last Splash era of the mid '90s Photo: Wikimedia Commons

We get to share tales from the grunge-epoch – his are better obviously (Kelley Deal borrowing his deodorant for instance), but for me, I cannot stress enough how much The Breeders imprinted themselves on my psyche that night. The Smashing Pumpkins’ Billy Corgan may have wailed on his strat and seethed with the entitled rage we all know and love (or loathe), but Kim and Kelley Deal had a carefree swagger that felt genuine and obviously much cooler. I remember at one point Corgan tried to get the crowd to chant “Kim Deal’s a bitch”. They didn’t. I mean, sheesh, what an absolute prick.

There are certainly no bad vibes on the line-up tonight. The support band is The Beths. You could say an obvious choice, but it’s also the perfect choice. Future Me Hates Me is the NZ album of the year for me, overflowing with fizzing, cutting pop tunes, droll observations and raw power.

“We are The Beths” says frontwoman Elizabeth Stokes after the first song. A few songs later: “We are still The Beths.” That is some good banter. Live versions of ‘Happy Unhappy’ and ‘Little Death’ are all-consuming. Definitely one of New Zealand’s best bands and I feel like a lot of people haven’t really worked that out yet.

The Breeders shuffle onstage to a wash of feedback and explode into ‘Saints’, a riff monster from their 1993 album Last Splash that sounds much bigger to me now than it did in 1994. They pummel through ‘Wait In The Car’, ‘No Aloha’ then ‘Divine Hammer’ for Pete’s sake. Kim’s voice sounds a bit shot, but the band sound great.

Kelley’s harmonies are perfect and her guitar playing is immense. It seems so odd now to remember that, as the myth goes, Kelley had never played guitar before joining the band as their lead guitarist.
Jim Macpherson plays drums like no one else. Holding time on the hats and bringing in the backbeat only when essential, leaving space for melody and subtlety, and then when the time is right smashing the crap out of his kit.

Josephine Wiggs’ bass playing is so precise, tight and measured it holds everything together, and Kim Deal is Kim Deal. When I saw them in the early 2000s they were great, but it wasn’t this band and there is an unbreakable dynamic between the four of them.

Kim may be almost losing her voice, but this ain't her first rodeo: she manages to ease it back into life, never hits a wrong note and by the time they get to ‘Cannonball’, it feels like it’s back to its howling, era-defining best.

I mean, who sings like Kim Deal? Well, maybe Kelly Deal I guess. When they harmonise on tracks like ‘Driving On 9’ and ‘Fortunately Gone’ it’s achingly beautiful.

Um, holy shit. I met the motherfuckin’ Breeders. Kelley Deal personally gave me her setlist and I got her to sign it on my back lol. They were the actual. fucking. nicest and I was a !!!complete!!! fangirl loser. I’m ded. No words. Bye. #thebreeders #kimdeal #kelleydeal #josephinewiggs #jimmacpherson #allnerve #lastsplash #pod #mountainbattles #thepixies #thedreamoftheninetiesisalive

It’s hard to pin down what makes The Breeders so good because so much hinges on Kim Deal’s singular musical approach. Her instinct for a hook is matched with a desire to pull apart the raw elements of a pop-song until nothing is left but its pure (if somewhat fuzzy) essence.

Certainly, they have touches of that loud-quiet-loud formula that made tracks like The Pixies’ ‘Debaser’, Radiohead’s ‘Creep’ and Nirvana’s ‘Smells Like Teen Spirit’ so emotive, but Deal has a more nuanced approach. Her song structures are almost baffling.

Take ‘Cannonball’; It jumps from distorted wailing to a dinky little drum figure by itself, then just the bassline. Eventually, something resembling a band playing together emerges, until everything lifts off into the best song of the 90s. Grunge just isn’t the right word for such artful, inspired music.

The gig is flying by at furious pace as they storm through seemingly all of their best songs, but then they pull out a surprising, dreamy choice. The Breeders broke up in 1995 after Kelley was arrested for heroin possession. It would start a period of low output and dribs and drabs of recovery and relapse for the Deal sisters; Wiggs would move on to other things; Macpherson got burnt out after making The Amps Pacer record with Kim.

Josephine Wiggs performing as a part of @thebreeders last night in Auckland. There's another one off the bucket list! Full review and gallery up this morning on the website!

In 2002 though, Kim and Kelley came back with Title T.K. and the third track on it ‘Off You’ is one of the most beautiful things I have ever heard. Five minutes of gentle, haunting, fuzzy words, the meaning of which I have no idea. But to me it means everything. When they play it at The Powerstation the audience is deathly quiet. Kim is singing with her full spook. Every line settles on the crowd like a plume of smoke.

It’s the highlight of the night and can’t even be eclipsed by closer ‘Gigantic’ (though the geek in me couldn’t help but love how precisely Wiggs imitated Black Francis’s jerky rhythm guitar part).

‘Gigantic’ is still an immense song. The Breeders are born somewhere in Deal’s writing of that Pixies classic. Somehow, through all the career stops and starts, all the tough times and periods of “indefinite hiatus” every album has actually lived up to it.

I don’t think Kim Deal has ever made a bad record. I might sound like an insane fanboy, but I just don’t care. She is that good, one of the greats. This Last Splash line-up is the best version of the band, it feels right, they look happy, I sure hope I get to see them again sometime.

They encore with “Do You Love Me Now?” The answer, quite obviously, is yes.