Will Ed Sheeran, who has stolen millions of hearts all around the world, and sold as many records, win over a cynical local musician, The Phoenix Foundation's Sam Scott? Not a chance. 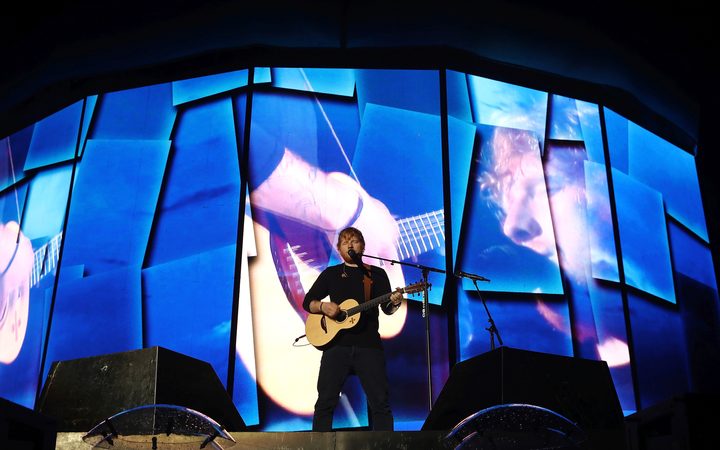 To steal and ruin a good lyric: there is no sun shining on the black clouds hanging over the domain today. It’s wet, it’s bleak. Ed Sheeran is in town and he’s used his dark magic to convince something like 140,000 punters over three nights, to brave almost inevitable downpours for massive MASSIVE hit songs and acoustic looping glory. What mean old men call “glorified busking.”

I will not be one of those mean old, grumpy, cynical men. I wouldn’t call myself a fan, but I am going into this show with an open heart. Truthfully much of Sheeran’s material makes no sense to me but occasionally I hear something that kinda moves me. He has a great voice. A voice very much of our time. Powerful and everyman at the same time. Mediocrity and dazzle in perfect balance. 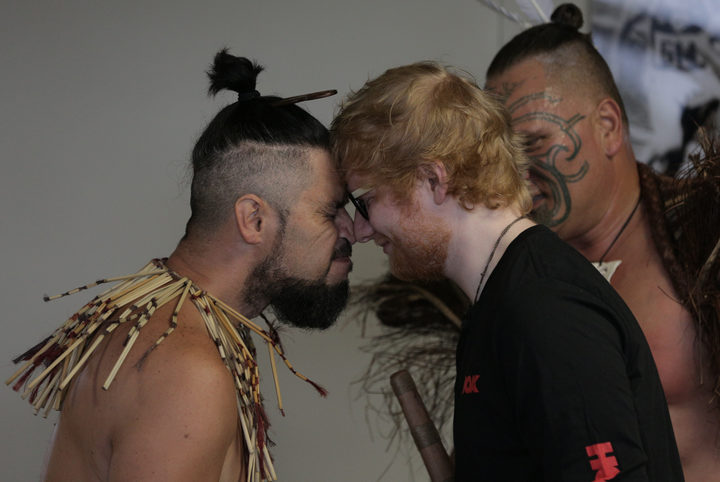 Ed Sheeran was welcomed with a pōwhiri performed by the kaiHaka group. Photo: RNZ/Dan Cook

Bizarrely the Shez once played before my cruddy band at a UK industry festival. This was before he was famous. And yeah, he was quite a nice bloke. This was literally a week before he appeared on Jools Holland and went viral. We played the same festival as Sheeran a few months later and he was high up on the bill and had a massive tour bus with his name on the side. But for that one night in Brighton, Ed Sheeran was my support act, and I thought he was both very talented and very boring.

But I will not let jealousy bring me down. I’m here to have fun. I must like this gig. RNZ doesn’t need the kind of negative feedback it would receive should I not be moved by Sheeran telling me (he is singing directly to me, I can feel it) that he is in love with my body. I’m in love with your body too Ed. Well not really. I like humans, generally. So I guess I’m in acceptance of the form your soul has taken on its journey of existence.

I’m having something of an internal meltdown as I speed down Dominion Road in my luxury stretched Prius Uber to the gig. The rain is torrential. Mt Smart won’t allow umbrellas in the stadium. The rubbish bins outside are full of abandoned umbrellas. I pray to Lord Ed for the rains to stop and they do, just in time for me and my companion for the evening, let’s call him J, to get lost trying to find our gate just as the first notes of 'Castle On The Hill' ring out. I quite like this song. It’s  moving, in the same way as Titanic or a great episode of peak early 90’s Oprah.

I stop on the way in to take a photo of the flannel shirts for sale. “No photos of the merch” says a proud young salesman. “Ok but I have already taken it.” “Well delete it then!” What a weird tense moment. I don’t delete the photo. I post it to social media.

The performance is, obviously, immaculate. A masterclass of being really great at being normal. I wish he had a band.The guitar loop thing, are his fans not bored of the trick? He’s a virtuoso of the art for sure. But to me it very quickly becomes samey. I wish he had a band, or a backing track. He’s such a great pop singer, I want him to put down his stupid tiny guitar and dance. But he is what he is.

This charming unthreatening tone has made him so freakin' big who am I to judge its worth? A band would be good though, or even a drum machine. The screens flash with visuals of the odd kiwi or koala. Seemingly drawn in Windows 95 MS Paint. Wow, I think to myself, what an effort they have gone to with that. The spectacle!

The highlight of the show is when he plays his version of the Nina Simone classic 'Feeling Good'. He sings the shit out of it. It sounds great. What a great song! When Nina sang it it had the power of a person who felt oppressed by society but freed by her own inner power. A statement of revolution. When Sheeran sings it, it just kinda sounds nice because it is blatantly the best piece of songwriting on display all night. He morphs it into his dragon-hobbit song which is really terrible.

As he plays 'Photograph' I think to myself 'I like this, it’s okay, I guess...but it’s also very boring'. J leans over and says “Man, this would be heaps better if it was The Cure, we should leave before the encore so it’s easier to get an Uber.” Ed has some great banter, I am charmed by that for sure, at one point he thanks all the Super Dads who don’t like his music but are at the gig braving the pop music to keep their kids happy. J says he’s my Super Dad, he’s right. He also sings along to songs he’s never heard. As do I. It’s fun, it’s all really fun and nice and pitch-perfect stadium glory. And completely boring. We left before the encore, as did a lot of other sensible Super Dads. I can honestly say I went in to this show thinking I might be wowed, but I wasn’t. Nothing was worth a wow. It was all just utterly, horribly fine.