Six60 are the first New Zealand band in history to sell out Western Springs, filling the whopping 50,000-capacity venue four months before their February 2019 show. Lead singer Matiu Walters joins us to tell stories and select tracks for the RNZ Music Mixtape. 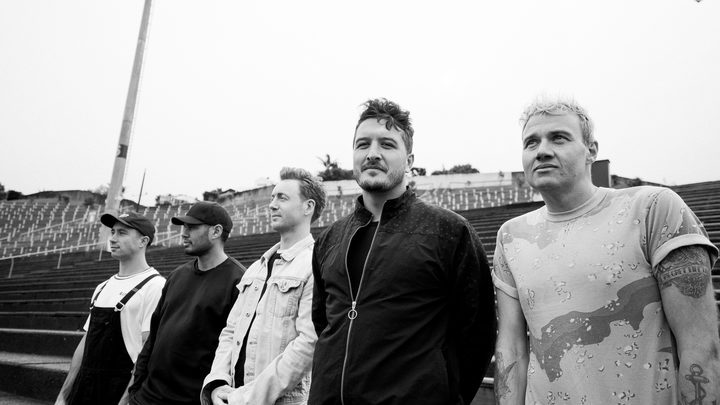 With his typical understated charm, Six60's lead singer Matiu Walters says the band wants their sold-out Western Springs show to be the first of many.

Six60 have haters and it’s easy to see why. Their 2015 album is still number three in the New Zealand charts. That’s 187 weeks and counting. They're all over the radio, their Spotify streams dwarf other local acts, and they make no bones about being ambitious.

Since the beginning, they've been assiduously independent. They started a record label before they even released a song. Financially beholden to no one, they treat being in the band like working for a brand. An attitude that's common for pop acts abroad, but rare in Aotearoa.

As Matiu explains, their mass appeal is no accident.

“At an early stage (writing a song) we always talk about how we can affect people in a positive manner ... That’s the challenge I like. Here is something I want to say. Now how do I communicate this to the most amount of people as possible?

“That requires a balance of yin and yang; of spirit and ego; of self-expression and understanding the game that we are in. Because we are in a game.”

In this revealing RNZ Music Mixtape, Matiu walks us through the songs that shaped his musical DNA and the thinking behind one of New Zealand’s most successful bands ever.

Blues Brothers – ‘Everybody Needs Somebody To Love’

Matiu: This first song is one of my first memories of music. Growing up we had four or five VHS tapes. The Blues Brothers, The Three Amigos and The Sound of Music - they were the three that I remember the most.

I used to watch The Blues Brothers over and over again. I mean the song, the people we’re talking about - James Brown, Aretha Franklin, Ray Charles - an incredible lineup.

As difficult as it was to choose one song from the soundtrack I picked one that jogged the memory.

Al Green – ‘Tired Of Being Alone’

Matiu: After I'd been exposed to music through The Blues Brothers, around about the time I was five or six, my parents bought property in Mangawhai Heads, about an hour and a half north of Auckland. It became pretty regular for us to have weekend trips going up there and as with road trips and family time there are always albums that would stick out and get replayed over and over again.

Al Green’s Greatest Hits was one of those albums that was played all the time. So I associate Al Green with that time in my life and now it’s a regular thing - every time we go away together it’s a bit of a stalwart of my musical experience.

I can’t say this is where my love of singing started. It might have been an initial seed but this song and this man and his style of music really captures my early years.

Matiu: All my musical experiences were from my parents basically until I went to primary school: Mangawhau Primary, Mt Eden. I started making my first real actual genuine friends and hearing music from them and listening to the radio and that’s where my first real love for gansta rap came from.

I was a central Auckland boy so I was all about Bone Thugs and 2 Pac and Biggie and all that. But this guy obviously stuck out because of his voice. He had swagger and this amazing voice that I was so drawn to.

Regardless of what he's singing about in most of his songs he had this influence on me and it was awesome to know that someone could be singing but als be singing from this gansta rap avenue.

Bob Marley and Lauryn Hill – ‘Turn Your Lights Down Low’

Matiu: I was late to Bob Marley and late to reggae really. It was only when I was at high school that I felt like I discovered him and that he was speaking to me. I love Bob Marley and everything he stood for. Obviously, he’s huge here. He’s Uncle Bob here in New Zealand and very instrumental in the Māori community.

Lauryn Hill, again I was introduced to her from a movie reference: Sister Act 2. There are amazing voices in that movie and I fell in love with her then and then again obviously with Miseducation.

This song just combines the two, both of whom I discovered in high school and this song is just beautiful.

Matiu: This song is the first one we played together as a band. It’s simple, you can play the loop for hours. It’s a beautiful song and this is where our connection and my new found love for New Zealand music happened.

It’s strange that I never connected to New Zealand music before. Maybe it’s an Auckland thing and me just being a rap die-hard and nothing else was going to get through.

The one that really did influence me before that was Che Fu. I loved Che Fu and he’s from Grey Lynn, so lived just down the road. But other than that either it [local music] never found me or I never found it.

Kanye West – ‘All Falls Down’

What I learnt from following his career and being a big fan of his music from early teenage years was his drive was really infectious. I loved how unapologetic he was and that he knew what he wanted and nothing was going to get in his way. Progress. Moving forward. Challenging yourself is the only way to challenge others.

I’ve actually learnt a lot from watching his interviews. For all his flaws, creatively he’s been a big influence.