The Head Like A Hole documentary: Swagger Of Thieves

Swagger Of Thieves is a documentary that follows notorious Wellington band from their reunion in 2008 and delves into the history that led to their demise the first time around. It's showing in theatres around NZ during May. 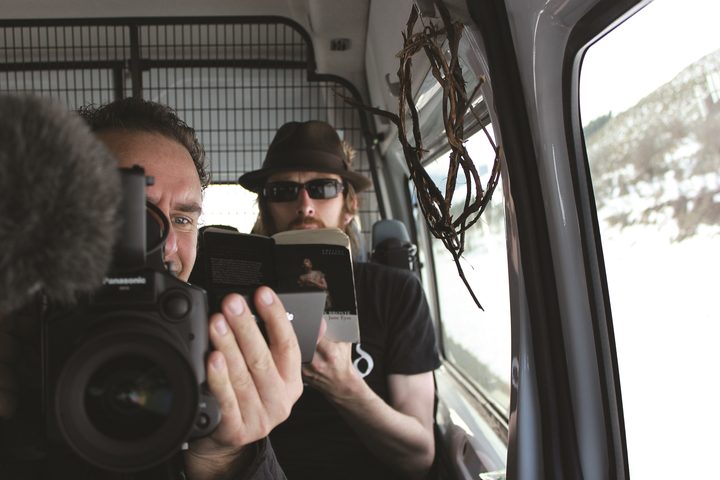 "Nigel and Booga loved it" says documentary maker Julian Boshier of the band's core members watching the film for the first time. "I think they were looking forward to the notoriety of it."

Swagger Of Thieves is a warts-and-all close-up of a band plagued with bad luck, poor decisions, internal conflict, and drug addictions.

"Head Like A Hole had so many opportunities, and so many people backing them," laments ex-member Tom Watson in the film. "The plan was to go to the other side of the world and tour, and be a touring rock band, 'cause we could have done that.

"We were working so hard, saving money, but Nigel and Booga spent it all. They just whacked it up their arms."

There is disturbing evidence of these habits during the film, in some footage taken in 1999 when the band were on tour in Dunedin. The scene shows the singer and guitarist melting heroin on spoons over a camp stove, then shooting up in the bathroom.

"I've never forgotten that footage" says Boshier, who was behind the camera that day. He was on the road with Head Like a Hole, collecting material for a music video. It wasn't the first he'd made for them - he was also responsible for the TVNZ banned video 'Wet Rubber'.

The previous day had been an eventful one. Looking for creative locations for the music video, Boshier suggested going up to Rolleston Prison. They rolled up to the visitors' queue in the car with Nigel Regan smoking a joint. As they approached, they saw police officers doing their routine checks.

There was no way to turn back.

"Our car reeked of marijuana smoke, you could see it, and we just all looked at each other and we knew it was going to be a long day. The guys were promptly arrested."

Swagger Of Thieves begins in 2008. Head Like A Hole, at the request of Homegrown Festival, have re-formed the quartet of Nigel Regan, Booga Beazley, bassist Andrew Durno and drummer Mike Franklin-Brown.

The latter two have strictly stipulated that if they get a whiff of any drugs on this tour, they're out of there. It doesn't stop some of them from drinking heavily. 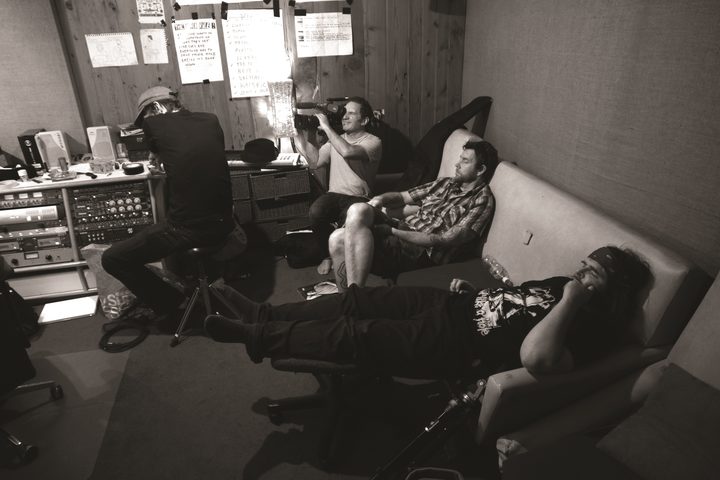 HLAH recording Blood Will Out Photo: screencapture, Swagger Of Thieves

There are train-wrecks on stage, friction off stage, and inebriated fans who just want to be near them. This is the life they want, and miss. It's what could have been. Booga wonders if they can keep on going.

In the intervening years since the band disintegrated, Nigel 'Booga' Beazley has had a family - twins Ivy and Jet. His wife Tamzin is a steadying force for him and the rest of the band, the voice of reason when things get rough.

He has a job cleaning windows, he's on the Methadone program, and he's got the middle-aged spread going on. But he stays positive, and he's realistic about the success of HLAH's reformation.

"We haven't been together for years and years and years, therefore why should the radio stations play lots of our music? And we're not a classic NZ rock band in the eyes of the NZ music industry are we? I'm not a Dave Dobbyn or a Neil Finn," muses Beazly as he washes windows during the film.

"I really admire him in many ways," says Boshier, "I mean, they're not the big rock stars that maybe they could have been once upon a time, basically through - as Nigel Regan says - their poor decisions, but they're pretty pragmatic about it."

The film ends in 2012 with the band being nominated for a NZ Music Award. Boshier says it was then he decided to wrap up filming.

"It had been going on for years and I also knew I was faced with a massive edit. I could have easily continued, I mean I could still be filming them today. There's drama going on today with the guys ... but y'know, you've got to jump off somewhere"

Artist: Head Like A Hole
Song: Wet Rubber
Composer: Regan/Beazley
Album: Are You Gonna Kiss It Or Shoot It?
Label: Wildside

Artist: Head Like A Hole
Song: Death of a Friend
Composer: Regan/Beazley
Album: Blood Will Out
Label: Wildside

Artist: Head Like A Hole
Song: Comfortably Shagged
Composer: Regan/Beazley
Album: Are You Gonna Kiss It Or Shoot It?
Label: Wildside