We pay tribute to Beaver, NZ Jazz singer and one of the voices in travelling musical bus, Blerta, who died on Sunday. Listen to an interview with Beverly Morrison we did in 2008 here

American soul singer Bettye Lavette is finally receiving the recognition she's craved for forty years - as she puts it she is - "coming up out of the crypt". Listen here

Meet the woman behind Shapeshifter and Ladi 6 - Becs Caughey - who suggests that managing musicians is much like marriage.

And its the final instalment of Jordan O'Jordan's tour diary, this week our travelling troubadour trawls the dilapidated couches of some peculiar bars in Christchurch and Dunedin. Hear audio and see photos here

Who chooses which acts appear at the big music festivals - and how? - hear from Barry Blackler of the Big Day Out and Hamish Pinkham of Rhythm And Vines. Listen here

We round-up a list of live shows coming up across the land,

Nick Bollinger reviews a re-recorded collection from well-dressed 80s Auckland band Penknife Glides, and we talk to Steven Gravelle from the band about why they chose to revisit that era.

Live: The Fourmyula At The Montecristo Room

Formed in the mid-sixties, The Fourmyula earned the title 'New Zealand's Beatles' for being the first local band to insist on recording their own material, resulting in a spectacular run of hits: 'Come With Me', 'Alice Is There', 'I Know Why', 'Home', 'Otaki' and 'Nature'.

The Fourmyula consolidated in the line-up of Wayne Mason (keyboards, guitar, vocals), Ali Richardson (bass, vocals), Martin Hope (guitar, vocals), Carl Evensen (Vocals) and Chris Parry (drums). This is the group that appeared on all the recordings and that played again in March 2010. Radio New Zealand was there to record one of the most important groups in New Zealand music history playing in a rare and significant reunion. Listen here 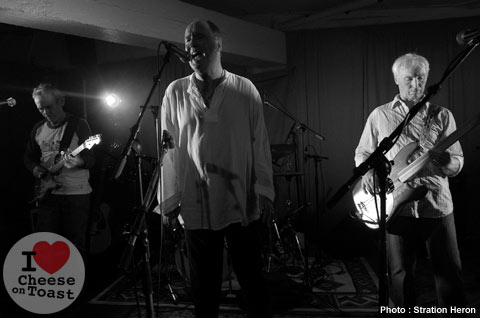