Recalling some of the local songs and music stories that created the soundtrack of the past decade. Today we focus on the years 2008 and 2009

Nick Bollinger reports back from the concert held in Auckland on Thursday. 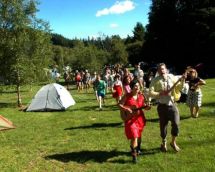 The Bristol trip hop originals talk about their new album Heligoland and keeping the gang together.

We go side of stage for one of the sold out summer seaside shows.

Sheffield duo play songs for us in the studio

A celebration of the boozers, brawlers and hell-raisers of rock 'n' roll - with award-winning presenter Stuart Maconie. From Hank Williams and Jerry Lee Lewis to Keith Moon and Ozzy Osbourne. (Final)

Featuring the sexy, smoky vocals of Tyra Hammond and a talented crew of musicians, Open Souls burn up the stage with songs from the Standing In The Rain album, the genesis of which was heavily influenced by late-'50s, early-'60s British and American R'n'B.

Radio New Zealand recorded this set live at the Kings Arms in Auckland on the final night of the Standing In The Rain Tour in October 2009.

We meet the hyped up Auckland trio.

One of the special treats the Campus A Low Hum festival provides is an old-school mix-tape swap. Participants choose songs and go all-out to design the most creative packaging. The mix-tapes are graded (according to visual criteria) then 'swapped' with others of similar splendour. We invite some of the contributors to choose just one of their songs for the Campus A Low Hum mix-tape Mix-Tape.