John Parish, who's been working with PJ Harvey since she was just 17, talks about their new collaborative album 'A Woman A Man Walked By"

In Access All Areas: 21st century bluesman Skip McDonald, who's been at the controls with Grandmaster Flash, Tackhead, On U Sound and Little Axe, talks about his career and new collaboration with Mauritanian musician Daby Toure.

Marking the start of the Mutton birding season, we talk to Dunedin songstress Emmanuelle Gomez, about the EP she wrote during last years harvest.

Troy Ferguson checks out the unorthodox pop songs of young British woman Micachu for The Sampler;

We speak to Tehimana Kerr, a.k.a Jetlag Johnson - guitarist with Fat Freddy's Drop, about his solo album;

Recorded at iconic London venue The Roundhouse in December 2008, these were the last two shows in the extensive 'Big BW' European tour, taking in Paris & regional France, Germany, Denmark, Portugal and the UK.

In true Freddy's style the London shows sold out purely on word of mouth.

Joe Dukie aka Dallas Tamaira - the band's lyricist and singing sensation says: "We try to play from the heart at every gig" - and you can hear that here. This is the Freddy's boys in their natural habitat: Live - showing off their range of soul, funk, dub, reggae, blues, house, hip hop, country, electro swing chops - a sound developed through years of local and international touring.

The Big BW tour showcased new music from the forthcoming album of the same name - coming 4 years after 'Based on A True Story' - the run-away indie success story of 2005.

This time the band is in a good position to repeat the feat internationally. 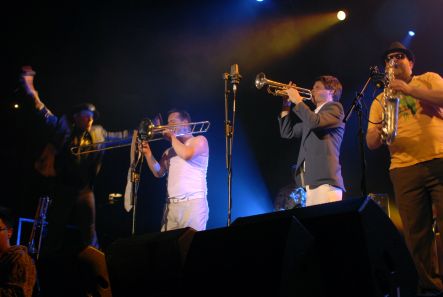