Access All Areas checks out a film called 'Guitars from the Leafy Suburbs' which documents the rise of a Devonport music scene which includes The Checks, The Veils, The Earlybirds, White Birds and Lemons and The Electric Confectionaires.

We catch up with The Mint Chicks, at their new base in Portland, Oregon,

and have a chat with Cut Off Your Hands, who are back home to play a few album release shows before they set off to take on the world

Then we get all electro on it, and attend a hotly contested battle between well known NZ producers- the MPC World Champs.

Honey-voiced jazz singer L.A. Mitchell pops in to sing us some songs,

And at 4.10, All Tomorrow's Parties 2008: music nerd Matthew Crawley investigates the goings on at one of the best-loved festivals around.

This year's All Tomorrow's Parties "curators" were those majestic Texan instrumentalists Explosions in the Sky - whose recent NZ shows had audiences stargazing.

The programme features interviews with members of The National, Animal Collective, A Hawk And A Hacksaw, Silver Jews, and more. 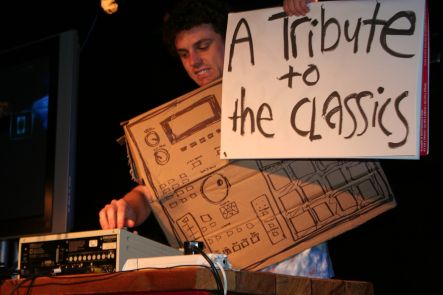