Health, hygiene failures in a third of NZ school buildings

A third of school buildings don't meet optimum standards for health and hygiene and a similar number fall short of Education Ministry standards for lighting, temperature and acoustics, a government Cabinet paper shows. 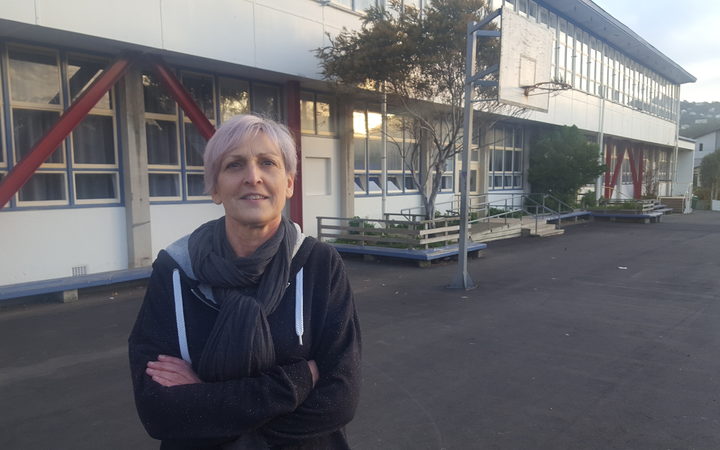 South Wellington Intermediate School principal Traci Liddall said her school's maintenance budget was gone by the end of term one this year and its five-year property funding was insufficient. Photo: RNZ / John Gerritsen

The paper said an initial survey of 30 percent of school buildings also indicated nearly half did not support modern teaching methods.

About 700 schools needed to do more work on their buildings than they could afford to over the next five years, and the government was considering forcing schools to carry out essential maintenance to ensure buildings did not fall into disrepair, it said.

The paper said 57 percent of the 17,500 buildings in state schools were more than 40 years old and that was causing problems.

Education Minister Chris Hipkins said the figures showed some buildings did not meet optimum standards, but that did not mean they were unsafe.

"There could be things like they don't have hot water in the bathroom, that's not necessarily going to create a risk but it's not ideal.

"It could be that they are not as warm as we would like them to be, that's certainly something you would expect with a school building estate that has the age that school buildings in New Zealand have," he said.

"So there's plenty of room for improvement but the main message is if the buildings were a risk then they wouldn't be being used."

Mr Hipkins said the government wanted to bring all school buildings up to scratch by 2030 and that would cost about $1 billion a year for the next 10 years.

He said it might also require a change to the way schools were funded for maintenance.

"At the moment it's done on a per-child basis rather than considering the state of the actual facilities. So a newer school gets the same amount of maintenance money as an older school with the same number of students and actually the older school is going to be more expensive to maintain," Mr Hipkins said.

"It's probably better to accelerate the replacement programme, because rather than spending a huge amount maintaining a really old building, accelerate the replacement programme, we replace that old building, get it back to new stock that meets all the criteria, it's a much better teaching environment and we're not wasting money on maintaining it trying to keep it in service," he said.

Mr Williams said most old school buildings were intended to last 50 years and that time was up.

He said the buildings had been kept in service, but they could not be upgraded to provide modern learning environments.

The principal of South Wellington Intermediate, Traci Liddall, said her school's maintenance budget was gone by the end of term one this year and its five-year property funding was insufficient.

"Our next 5YA, five-yearly allowance of money, won't tackle the whole of one of the jobs we've got to do and we've got five major pieces of work that need to happen," she said.

Ms Liddall said her school had been waiting several years for a new roof but a replacement had been put on hold because further problems had emerged including pipe replacement that would require the floor of the entire block to be ripped up.

"That is going to be hundreds of thousands of dollars and we will still have a falling-down building," she said.

The Cabinet paper showed the government was considering ways of ensuring schools conducted maintenance on their buildings.

"I have asked the Ministry to explore ways it can establish minimum property service levels (and schedules) that can be monitored and supported and if need be, enforced to avoid building deterioration (this could cover routine services such as gutter cleaning, building wash-downs and cosmetic exterior painting but also has the potential to consider scheduled minor works)," the minister's paper said.

Mr Hipkins told RNZ some schools had done a good job of maintaining their facilities but others had not.

"In many cases those schools have prioritised other things for very good reason, but the reality now is their facilities are run-down and we're going to have to spend more money bringing them up to speed," he said.

"Money's provided to schools to maintain their buildings for a reason and they shouldn't really be spending that on other things."

"In some instances the maintenance money isn't spent on maintenance, it goes to improving learning outcomes for young people."

Mr Cormick said schools were likely to accept a requirement to spend property funding on property.

A member of an Education Ministry advisory group about school property, Hawke's Bay principal Mike Bain, said there was sense in ensuring schools carried out tasks such as washing their buildings regularly.

"I would rather see the ministry adopting a positive approach about what's the encouragement to meet the needs of your building and the maintenance that's required rather than a punitive approach."