The Public Interest Journalism Fund has bankrolled 110 new journalism jobs - the biggest investment yet from this recent government initiative. News media companies welcomed this boost - but critics claim giving the fund $55 million of public money undermines editorial and financial independence. What will we get from the new roles paid for by the public purse? 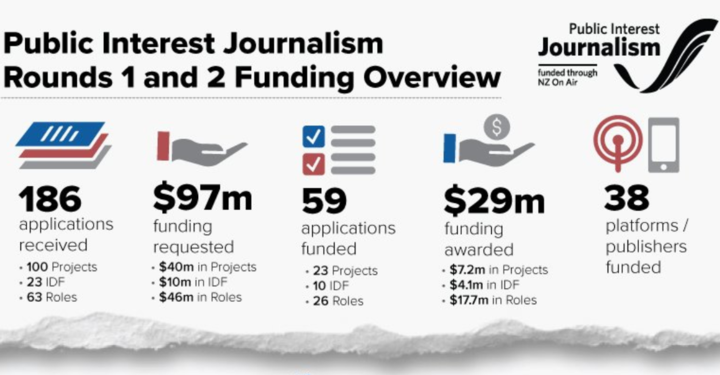 The Labour Party went into the 2017 election pledging to power up public service media by boosting RNZ’s budget.

But once in power, that plan fell by the wayside along with its first broadcasting minister Clare Curran.

Her replacement Kris Faafoi pledged to help all news media suffering from slumps in revenue and stiff competition from the likes of Google and Facebook.

Little has been done to confront the tech titans dominance of digital advertising, but public money is now flowing to local news providers.

Back in February the government earmarked $55m over three years in the new Public Interest Journalism Fund to help sustain at-risk local news and journalism - and democracy itself.

Media companies big and small, old and new, local and national can all apply to the fund overseen by the government’s broadcasting funding agency NZ On Air.

NZ On Air said it would spend the money on:

The last one is a bit of a break from the past. Successive governments have funded public broadcasting for decades and in recent years, New Zealand on Air has also paid out for news and current affairs from private media companies. But paying commercial companies to hire new journalists is new.

Big money for many jobs 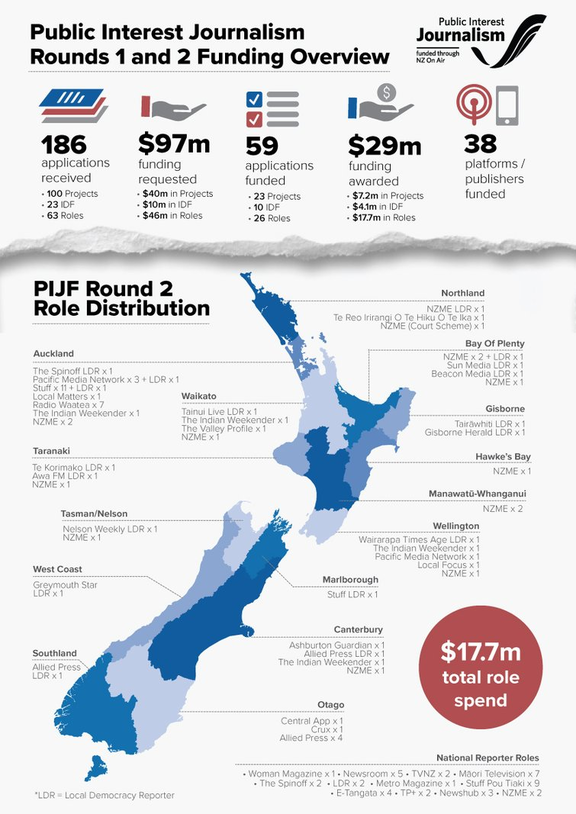 Late last week NZ On Air announced its biggest outlay yet from the fund: almost $18m for 110 new jobs over - in most cases - a period of two years.

Stuff gets just under $3m to hire 20 journalists for community news and its Māori initiative Pou Tiaki.

NZME - owner of the New Zealand Herald - gets about the same Te Pātiti - for 15 jobs reporting on justice and the courts which will end up in 11 publications.

A further $3.5m will boost the Local Democracy Reporting service - administered by RNZ - to take on 20 reporters around the country for two more years.

Māori Television gets more than $1.5m for seven journalists.

Smaller, newer media outlets also get substantial sums for new staff. The Spinoff can get up  to $427,000 for two new staff - and magazines North and South, Metro and new publisher School Road all get money for new staff too - as do more than a dozen smaller local news publishers and broadcasters.

Gisborne Herald editor Jeremy Muir said publicly-funded journalism was a great response to the challenges faced by many media.

“It is now shouldering the vital role news organisations play in New Zealand society, as well as enriching our lives with content we wouldn't otherwise see," he told his own paper last week.

Claims of conflicts and buying compliance

Predictably most media companies welcomed the PIJF’s money, but opposition politicians have warned it will make our media reluctant to bite the hand that’s feeding them.

Just after the launch of the fund, National Party broadcasting spokesperson Melissa Lee asked the bosses of state-owned TVNZ and RNZ if they would run shy of stories that could damage the government if they feared jeopardising this funding.

They said no - and TVNZ’s startled chief executive told her its share of the fund would barely amount to “a round of drinks”.

The Minister of Broadcasting and Media Kris Faafoi insisted neither he or his peers would have any say in where the public money went.

“It wouldn’t even enter a journalist’s head to pull their punches to protect a funder,” Stuff’s chief editor Patrick Crewdson said an article headlined Why government money doesn't corrupt our journalism.

He said Stuff has been getting money from NZ on Air funding for years for investigations, podcasts and for video projects - and a “church and state” divide separated the newsroom from any editorial influence.

But conflict of interest claims surfaced again in July after NZ on Air spent the first $10m from the PIJF on a range of content.

National Party leader Judith Collins asked the PM in Parliament if this funding is buying compliance.

“You have the government helping out the media because they say it's good to have the media but ... I don't buy it and I don't think the media should buy it. But obviously some have completely drunk the Kool Aid,” she said.

When controversial Magic Talk host Peter Williams - no fan of the Ardern government - retired suddenly earlier this month, some of his disappointed fans thought the Fund was part of the reason. In online comment, some disgruntled readers refer to the media as the “team of $55 million.”

"IT…DOESN’T…HAPPEN," he wrote on his blog last week.

"When influential commentators start singing the tune it is time for journalists to collectively defend their professional reputations," he said.

"There is fundamentally no difference between the grants being offered in New Zealand - and subsidies common in Scandinavia, before Congress in the US, and being suggested for Australia," he wrote. 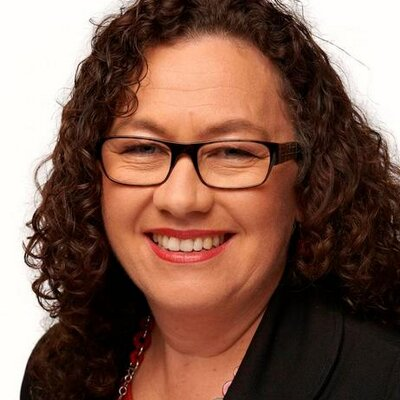 The money will be a godsend for editors and managers, but what’s the return for the public footing the bill?

She cites the NZME Open Justice Te Pātiti project as an exemplar.

“There has been a fall in the number of journalists able to come to Courts. It’s time-consuming and it’s expensive because you need experienced journalists - so this is one of the ways the fund can support the regeneration of that kind of newsgathering,” Raewyn Rasch told Mediawatch.

“People will see (the results) in their local newspapers because the scheme is pretty much nationwide,” she added.

NZME’s papers are all in the upper North Island. Allied Press only covers the south of the South Island. Readers of papers elsewhere will not get the benefit - though RNZ will have access to the reports.

“It’s an NZME proposal so that’s the coverage. But it will also look at the issues of justice nationwide - and questions like why it takes so long for cases to come to court - and if it happens the same way in Rotorua or Dunedin?” she said.

Why do established newsrooms at major commercial broadcasters need the public purse to add more reporters?

“The Newshub roles are a Pacific reporter, a Māori reporter and an Asian reporter. Those are really important roles that neither of those organisations feel they were able to fund themselves currently,” she said. TVNZ’s new jobs are a Māori ‘partnership editor’ at senior executive level - and a second role to support that position.

“They will ensure that the decisions that are made at executive level can be made at a programme level around things like translations and tikanga within individual stories,” Rasch told Mediawatch.

“We will start to see those roles appear in other proposals as well in upcoming rounds of funding,” she said.

The Fund’s guidelines state the Fund must “actively promote the principles of Partnership, Participation and Active Protection under Te Tiriti o Waitangi".

“Many media organisations do not understand Te Tiriti and the conversations they are curating run the risk of being biased, racist and not delivering to the Te Tiriti partner - Māori or tangata whenua,” Rasch told Mediawatch last July.

Will a partnership editor edit or censor news stories if they don’t think principles of te Tiriti have been incorporated properly?

“No. These roles are to enable the newsroom to have a Māori lens across the decisions that are made every day. This is a really important transformational change in our newsrooms. I think Māori deserve a seat at that executive table. I can’t understand how that would be a bad thing,” she said.

“All editorial decisions are made based on fairness, balance and those journalistic things. One of those things surely should be that it is fair to Māori so I still don’t quite understand why it should be problematic,” Rasch said.

“Partnership editors’ will sit at the executive level like any other executive and help shape the news agenda for whichever news organisation they’re part of. That hasn’t been there so far and that’s a deficit,” she said.

Rasch told Mediawatch this will boost reporting capability, but neither broadcaster expected to create new programmes or specific new output with these new funded roles.

“We work closely with (Māori broadcasting funding agency) Te Mangai Paho to ensure that we aren’t duplicating their funding. Māori TV for instance is not funded to produce news and current affairs. It chooses to, but it needs more support to do that so providing these roles is important,” Rasch said.

Rasch also told Mediawatch she was not concerned about claims the funding compromised media independence.

“I’m not entirely sure where this comes from and where the evidence is to suggest that we somehow have influence over the editorial (content) of the media. We do not,” she said.

“New Zealand on Air has been running for 32 years ... and funded factual programmes that are unbiased and are not a government mouthpiece,” she said.

“The fund is set up to provide public interest journalism that holds power to account ... and that is what we’re doing. It is very easy for people to stand on the sidelines and snipe but actually I haven’t any evidence that we could influence the outcomes of the media and we are only funding a small amount of what the media does,” she said.