The Herald kicked off last week with a front page story devoted to Sid and Chand Sahrawat’s decision to close their three upmarket Auckland restaurants for two weeks. 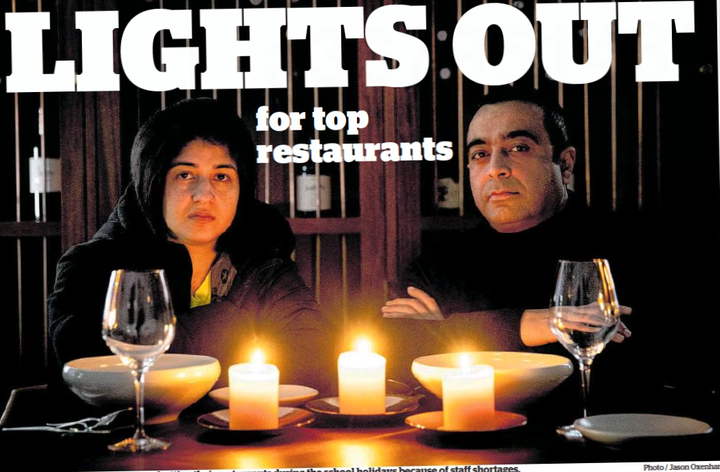 The 'Lights Out' protest was front page news for the Herald on Monday. Photo: PHOTO / RNZ Mediawatch

The pair blamed staffing shortages, caused in part by a lack of migrant workers during the Covid-19 pandemic, for their decision.

It was the start of a media blitz for hospitality industry bosses.

Over the next few days, a succession of restaurant and cafe owners were filmed ceremoniously switching off their lights as part of the Restaurant Association’s The Reset campaign.

It aimed to put pressure on the government to allow more migrant hospitality workers into the country to fill gaps appearing in the rosters at many bars and eateries.

For a while, its talking points went pretty much unchallenged.

The Project’s coverage saw presenter Jeremy Corbett quizzing Lumsden Freehouse owner Evan King, who brushed off a question about whether low pay was a factor in the industry's struggles to find staff.

"That's an absolute misconception and false lie that's been repeated for years and years and years.," he said. "Our bar, for one, pays over the living wage for every single employee. The wages in hospitality are actually pretty good."

"We could close the kitchen for a day a week. We could make our menu much smaller and one chef could do it for those few days. Just find someone. We could pay more money - an unsustainable amount of money - that's a point."

These initial reports were a lesson in how a well-run PR campaign can help you sneak some early, less-than-critical coverage for your cause.

As it turns out, many hospitality workers don’t see their pay levels as quite such an insurmountable, or insignificant, factor in their industry’s staffing shortage, and this week their voices have started to be cut through.

The morning after The Project ran its story, the founder of hospitality advocacy organisation Raise The Bar, Chloe Ann-King, talked to RNZ’s First Up.

King’s message echoed that of Charlotte Muru-Lanning, a former hospitality worker who now writes at The Spinoff.

She told RNZ podcast The Detail that hospitality employers should be concentrating on fixing an exploitative industry, rather than patching over their problems with migrants.

"I don't doubt that there's a worker shortage. The blame for that lies on the industry," she said. "I always think if there weren't enough jobs and there were all these hospitality workers looking for work, they would have to upskill to look good enough for an employer to employ them, but when it comes the other way round, there's not that same expectation to draw us in."

On RNZ’s Nine To Noon, political commentator Neale Jones also criticised hospitality bosses getting their hackles up at facing a market where they have to compete for workers, as opposed to one that works the other way round.

It likely wasn’t intentional, but Employers and Manufacturers Association head of strategy Alan McDonald helped fuel that chorus of criticism, in an interview with Newsroom’s Jonathan Milne about whether the country has reached its maximum sustainable level of employment.

He told Milne the country’s current unemployment of 4.5 percent is too low, and needs to be closer to 5 percent to help stave off wage inflation and help businesses retain staff.

Data journalist Keith Ng pointed out that the EMA raising concerns about high employment, recently opposed Labour’s minimum wage rise in part on the basis that it would force businesses to close and cost jobs.

New Zealand Initiative economist Eric Crampton argued that while McDonald made his point poorly, there are real concerns that driving unemployment down with higher inflation easily results in higher long-term inflation, without long-term improvement in unemployment.

"For a long time, New Zealand businesses have paid far less than other places. We know that as a country we have less of our economy going to workers, compared to business owners. It is about finding that balance, and I think that balance has not been present in a lot of the media coverage."

Eaqub noted that many of the industries asking for low-wage workers are recording high profits.

More than 366,000 workers are also currently 'underutilised' and searching for work - but not connecting with employers like Sid and Chand Sahrawat at The French Cafe.

"I would like to see far greater exploration of the fact that there are many businesses and industries in New Zealand where sales have gone up, profits have gone up, and the same businesses are arguing that 'we need to have access to cheap labour, because we want to make more money'."

Some disclaimers apply here: employers have an important perspective, and broadcasting it doesn’t brainwash audiences into believing every word.

In the end, workers' voices did start to cut through in the last two weeks, and employers' campaigning started to seem a bit less sympathetic.

But it might have been nice to hear earlier on from those who may not have been so keen to switch off the lights over a market offering them higher wages and a better shot at getting a job.

This roiling two-week-long media saga comes with a small warning: even if a story comes packaged with glossy PR and on-call media talent, it’s worth checking for the other perspectives before going to air, or hitting print.