More free-to-air sport around the corner

A new national radio network dedicated to sport will go live on air on Monday 19 July - just in time for the Tokyo Olympics. Australian-owned SENZ will fill a void left by the closure of NZME's Radio Sport in April 2020 during the Covid lockdown. Meanwhile TVNZ and Discovery have done deals with Sky to get the Olympics and Wimbledon on screen for free. 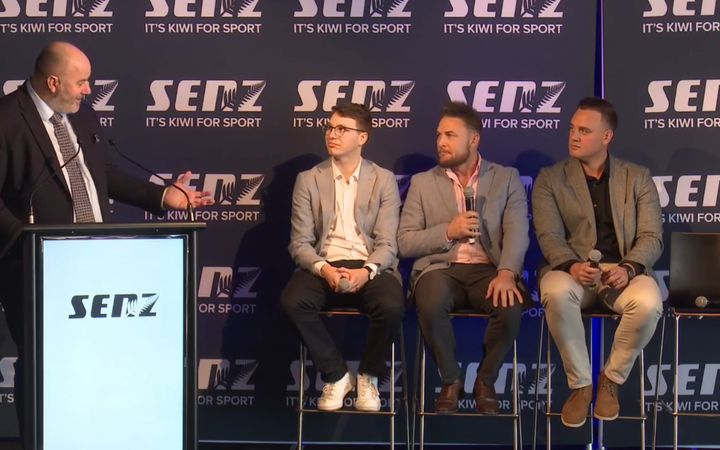 The CEO of the Australian  parent company SEN Craig Hutchison announced the launch date at special event at Eden Park this morning.

He said SENZ will be on air when the Tokyo Olympics get under way and it will cover top rugby, racing and cricket live He said it will also cover franchise sides in trans-Tasman leagues like The Warriors in the NRL and the Phoenix in the A-League.

He also said Silver Ferns games would be covered live and listeners could expect coverage of the Black Caps during overseas tours.

"There are lots of emotional issues in sport and the New Zealand sporting public want to have their say. I want to give the public the opportunity to have their say," said Ian Smith, who will host SENZ's morning show.

SEN has also set up an app for online listening and Craig Hutchison said the SENZ network will create local video and podcast content online.

SEN announced plans in March to acquire the radio licences the TAB used for Trackside around the country.

Since then SEN has advertised for newsreaders. a broadcast engineer and a broadcast operations and content manager.

What kind of company is SEN?

SEN grew out of a tiny sports marketing company called Crocmedia founded in 2006 which was barely a broadcaster at all.

But now it has an array of channels, marketing and events businesses and online platforms and websites. It is sometimes described as an Australian version of US-based multimedia sports outfit ESPN.

It broadcasts live action from popular sports and makes shows dedicated to them but the company's core is local radio stations across Australia.

It acquired 28 licences in Australia over the past 18 months and expanded aggressively .

In April Melbourne paper The Age said he has “built a national media empire from scratch during a decade of incremental acquisitions and mergers”.

Meanwhile two other broadcasters have done an unexpected deal to put a top tennis tournament on TV for free this coming week.

The TV channel Three will show Wimbledon after its new owner Discovery did a deal with Sky TV.

Three will show live daily action after 10pm across this coming week  - followed by a selection of live quarter and semi-finals and delayed coverage of the men’s and women’s finals.

On Friday, TVNZ announced its done a deal with Sky for FTA coverage of the Tokyo Olympics  next month - from 23 July to 8 August

TVNZ says TVNZ 1’s regular schedule from lunchtime through to 2 am will be taken over with coverage  - focusing on Kiwis competing - but with a break each evening for 1 NEWS at 6 and Seven Sharp.

When no New Zealanders are competing, TVNZ 1 have delayed coverage of other notable events instead.

Te Karere will move to thee earlier weekday time of 11.30 am on TVNZ 1 for the duration - while soap opera fans not into sport have also been catered for. TVNZ 2 will air episodes of Coronation Street and Emmerdale bumped from TVNZ 1 by the Tokyo coverage.

But  - as Stuff reports -  fans of The Chase on  TVNZ1 will have to go cold turkey for the two weeks in Tokyo.