China used to deny or ignore media queries about the human rights of the ethnic Uyghur minority. But before our government debated its response in Parliament this week, China’s embassy held an invite-only briefing for reporters and experts. What did they learn from the event one reporter called “extraordinary to the point of farce”? 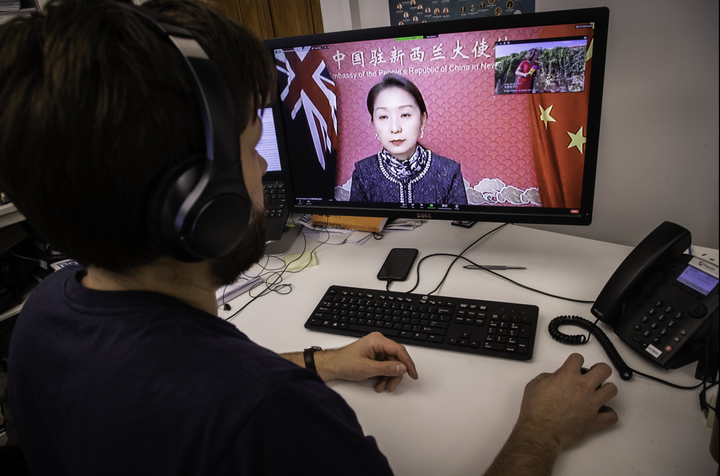 Are you confident you are on the right side of history?” Newshub political editor Tova O’Brien asked foreign minister Nanaia Mahuta on the Newshub Nation show the weekend before last.

MPs in UK's House of Commons had just voted to recognise what is going on in Xinjiang in China's northwest as ‘genocide’. Other ‘Five Eyes’ allies  - Australia, Canada, the United States - have all taken a tougher line in their relations with China.

But the minister was not about to commit to following suit on national television.

“I'm willing to get information about what we could do. I'm open to getting advice about this issue," she told Newshub Nation.

There was plenty of that before our Parliament debated the issue on Wednesday.

On RNZ’s Morning Report the day before, a group of Uyghur people in New Zealand urged MPs to follow their UK counterparts. The request came from lawyer Sam Vincent who said New Zealand-based Uyghurs were too afraid to speak out themselves.

But speaking up at the China Business Summit in Auckland the day before, China's ambassador to New Zealand Wu Xi said claims of genocide and forced labour in Xinjiang were “lies fabricated by anti-China forces.”

In the end all parties in Parliament agreed to express “grave concern” over serious human rights abuses - but did not mention genocide.

The Chinese Embassy responded with a statement on its website which said declaration was "in total disregard of China's solemn position".

As claims and counterclaims play out in the media, part of the problem for our understanding is that few foreign reporters remain in China these days.

New Zealand media have had no reporters in China for years now (or elsewhere in Asia for that matter) but Australian media had correspondents there for decades. That changed in September last year when the last ones  - ABC correspondent Bill Birtles and Australian Financial Review journalist Michael Smith - were hurried out of China during a diplomatic stoush.

In The Sydney Morning Herald and The Age this week, correspondent Eryk Bagshaw - who covers China from Singapore - said limiting media access to China was “having the desired effect.”

He said monitoring of Australian media coverage of China proved the cut-through the Chinese Communist Party’s propaganda was getting. 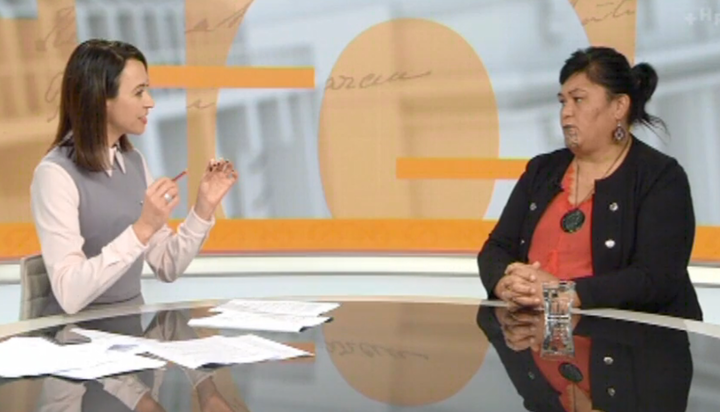 On the spot: Newshub's Tova O'Brien asks foreign minister Nanaia Mahuta if she is on "the right side of history" on the issue of human rights for Uyghur muslims in China. Photo: screenshot / Newshub Nation

An Australian expert on China's northwest, Dr David Brophy, told Nine to Noon last Tuesday China used to simply deny suppression of ethnic groups within its borders or ignore reports of it.

But now it has begun briefing international media with its side of the story on Xinjiang.

A press conference last month at the Chinese Embassy in Canberra was condemned as propaganda by spokespeople for Uyghurs in Australia.

Chinese ambassador to Australia Cheng Jingye stated that the press conference aimed at "helping Australian journalists to understand the real situation in Xinjiang". He said Western media's allegations were based on fake news and misinformation.

Last week there was a similar briefing here for local media - but this one was an invitation-only online presentation arranged by the China’s Embassy in Wellington.

Among those invited was Paula Penfold, part of the Stuff Circuit team which recently published multi-media investigation Deleted - all about Xinjiang, Uyghurs and links back to New Zealand business and politics.

She was not impressed:

Unusual, certainly. But was it newsworthy?

In his online report on the briefing for Newshub, reporter Jamie Ensor described it as a "highly orchestrated presentation by the Chinese Government attempting to show life there as harmonious and prosperous."

His report quoted National's Foreign Affairs spokesperson Gerry Brownlee as saying he was "more concerned" after the briefing - and he was unconvinced by claims international media were not excluded from Xinjiang.

"To counter that by simply saying 'you can come here, but essentially only see what we want you to see', doesn't take us very far," Brownlee said.

"We are showing today is the true story from Xinjiang, whether people like it or not, it is the truth and it is what is happening in Xinjiang. It is what the people from Xinjiang are going to tell."

“I haven’t been involved in a press conference like that before. I went in with some expectations, knowing what had happened in Australia for example, but it was certainly very unusual,“ Stuff political reporter Thomas Manch told Mediawatch.

The invitation asked him to put forward questions to be considered in advance.

“Realistically, what could the Chinese Embassy expect the outcome to be? They’ve had similar experiences overseas with flow-on media reports noting how unusual it is - and that the information supplied failed to address the main question at hand,” Manch said.

“A lot of information was conveyed - such as the GDP and the poverty level in Xinjiang and how it’s changed and how much rail line has been built. But it felt like the lines we often hear from Chinese foreign service spokespeople commonly,” Manch said.

“The videos were like tourism ads - showing sweeping landscapes and people happy in their employment. It was an advertisement,” he said.

Others who took part included David Bromwich of the New Zealand China Friendship Society - and David Mahon, a New Zealander who does business in China and writes occasional columns for the media in The Listener and other outlets.

Manch says his Stuff colleague Paula Penfold asked a series of questions of participants about why journalists and UN personnel were not allowed unfettered access, and why journalists and academics can only receive information and interact with people in Xinjiang in controlled circumstances.

“The response was the door is always open - but also that [they] wouldn’t [allow unfettered access] because it would impinge on their sovereignty,” Manch said.

Manch’s Stuff report records National’s foreign affairs spokesperson Gerry Brownlee saying the nature of the event “caused me more concern about what is happening in Xinjiang”.

“With all due respect ... saying you welcome people, journalists, to come in ... is caveated with what looks like fairly heavy restrictions. For us, this is a very strange position. The effort appears to be to say, ‘Nothing to see here, move on’. In our culture, that often means there is something to see,” Stuff quotes Brownlee as saying during the briefing.

“The government’s view on this is that there should be unfettered access to the region to establish what is happening. To hear that from an opposition spokesperson is useful and shows a degree of consensus.”

Thomas Manch told Mediawatch he was initially in two minds about whether to report the event at all.

“But it’s one of the few opportunities we have to interact with China. In Australia and elsewhere they have more direct face-to-face contact with bureaucrats. The embassy here is more remote,” Manch said.

“In the last 18 months ... I’ve been contacting the embassy relatively regularly asking for responses and, primarily, interviews. I’ve never received an interview. I’ve never met the ambassador as yet. It’ll be interesting to see if this briefing is the beginning of a new pattern,” Manch said.

“I probably would participate again to see if there’s any shift. It serves a purpose at least in terms of understanding what messages are being sent out - and you never know what someone might say in an event like that. There might be a message significantly different from what we’ve heard previously,” Manch said.