Mediawatch looks at how the blame game played out in the media over the latest Covid-19 cluster and the rulebreakers  - while the previously-praised Covid-19 communications strategy was called into question by the media, along with the concept of our team of 5 million. 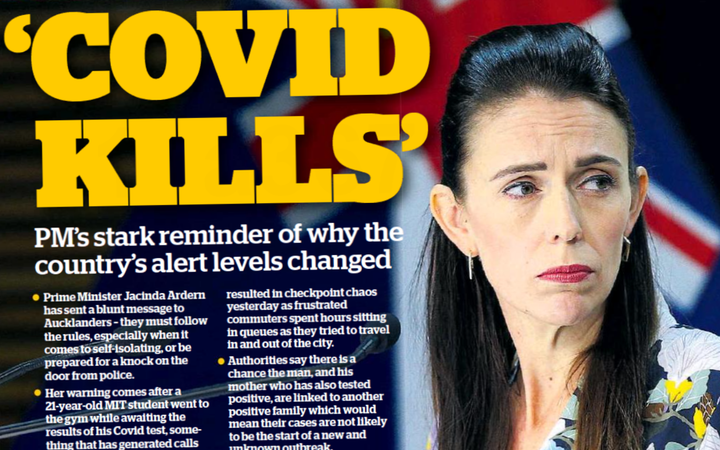 Last week, the ‘Unite to Fight Covid-19’ ads were nominated in this year’s Axis Awards for New Zealand advertising in the category of ‘Best Brand Experience & Activation’.

The yellow-and-white striped ads - telling us to wash hands and stay home, stay safe and so on - were also nominated in the Best Billboard category.

The campaign was widely regarded as money well spent when the curve was getting crushed and the elimination strategy seemed to be working last year.

UK-based design guru Alice Rawsthorn said the campaign was the best in the world.

Design in a Pandemic | 20. Of the plethora of information dispatched by governments on the Covid-19 crisis, one country’s information campaign stands out as being the most thoughtfully, clearly and sensitively designed - New Zealand’s.https://t.co/V4d0k7sZYI pic.twitter.com/BjVkkzGWwF

“Not only is the quality of the information exceptionally high, the manner in which it is organised and presented is unusually clear, precise, pragmatic and accessible,” she said.

But just days after the ad awards nominations, the effectiveness of the entire communications strategy was being called into question in the media this week - and even condemned in some quarters as wholly inadequate for some ages and communities.

What changed? The latest lockdown prompted by infectious individuals in Auckland who didn’t isolate - instead going to work, for a walk and to the gym.

These were far from the first bad breaches to have been recorded - and reported - during the Covid-19 crisis, yet they kicked off a huge blame game in the media - and claims of ‘cracks in the team of 5 million.’

We’ve been here before.

Are we still a team of five million? asked Stuff back in August last year, citing an analysis of public conversations from social media - and the same week the New Zealand Herald concluded “the sense of community during the first lockdown appeared to have somewhat dissolved.”

That was according to a poll the Herald itself had commissioned, but it later conceded the poll didn’t show that at all.

This week more overwrought conclusions were being drawn by the media from a darkening public mood over those deemed to have led us all into lockdown by failing to follow the rules.

Is the Ardern government's kindness mantra beginning to fray? asked The Spinoff on Tuesday.

Stuff’s political editor Luke Malpas pulled at the same threads the same day -- in a piece that included this claim:

“This week will be the biggest political test of this new Labour Government, and the greatest test of the Government’s response to Covid-19 since the original lockdown.”

Bold call. That was before we knew for sure whether the current cluster would expand as test results came in.

The ‘Americold cluster’ last year was far bigger,  the lockdown of Auckland was longer and that was long before a vaccine was on the horizon - let alone onshore.

The finger of blame

Last Monday the PM spoke of her frustration, but also her fears that condemnation would be counter-productive.

But some with a media platform wanted prosecutions.

“Ardern should have laid down the law,” said Duncan Garner on his AM show, condensing her response as “pathetically weak.”

“Why aren't we policing alert level 3?,” he asked,

It is of course the Police - not the PM - who have the power to prosecute, working with direction from health authorities putting in place public health orders, but he wasn't alone in calling for more stick, less carrot.

When the PM upped her irritation later that day and said rulebreakers should be called out by acquaintances, Newsroom’s Jo Moir called it a ”complete change of tune from the top  - and just one of many mixed messages in recent days.”

“In an impressive display of washing one’s hands of responsibility, the Government has blamed these rule breakers for the shift to level 3,” said Moir.

Stuff political editor Luke Malpas wrote on Monday that “the PM wanted us to know it's not her Government's fault.”

"It's coming from both sides of politics. “Throw them in prison.” “Call them out.” Once again, the voice of working people is missing,” said lobbyist Josie Pagani.

The story got more complicated when Case L  - the young woman who went to work at KFC last week -  said her family got text messages indicating she didn't need to self-isolate.

She told Newshub’s investigations editor Michael Morrah on Tuesday her family suffered an online pile-on and she wanted an apology from the PM. There were more claims and counter-claims after that from health officials, relatives and union reps.

The same day the PM and Covid-19 response minister Chris Hipkins reminded employers of their responsibilities - and TVNZ’s Kristin Hall and Katie Bradford unearthed employers not paying employees properly who had obediently isolated as they were told.

All this created angst in the media about key messages not getting through to important demographics and communities.

Rip it up and start again?

Some tried to make the case via the media that the problem here was that  - no matter what the message - fear of losing income and employment would be more significant than fear of Covid for people close to the breadline.

A Papetoetoe GP  told  Stuff “Covid just isn’t the biggest thing that’s happening” in some people’s lives. They might be suffering from mental health issues, struggling to make ends meet, or living in a two-bedroom apartment with 10 people. Suddenly, self-isolating at home isn’t so simple.”

“You're the sole income earner for your family. You're told to stay home after you went to Kmart at the wrong time. Your job says you won't be paid if you do. The Govt only offers $588/week - below the minimum wage and pre-tax. What do you do?”

Stuff’s Joel Maxwell asked a handful of people if they thought the official Covid-19 message was clear enough.

The headline Young people to Government – 'Your message is too old, too stale and way too long' was a bit of a stretch on the sample size, but others made a similar point.

On Morning Report Corin Dann asked Dr Bloomfield if his Ministry of Health had been “a bit too middle class and middle aged” to consider putting messages on platforms like TikTok.

The Minister for Social Development and Employment Carmel Sepuloni told Dann the associate minister of health Peeni Henare was rounding up “influencers” who might help spread the message - which sounded a bit late.

The most colourful condemnation of the Covid-19 communications came from lobbyist and PR pro Matthew Hooton in the Herald.

“The sick, the possibly sick and the general population have been given inconsistent or inaccurate information by government and health officials, using language and channels more suitable for multiply-degreed, upper-income, monocultural Wellington bureaucrats,” he wrote.

Was all that this past week a sign those in charge of the much-praised Covid-19 campaign now need to rip it up and start again? 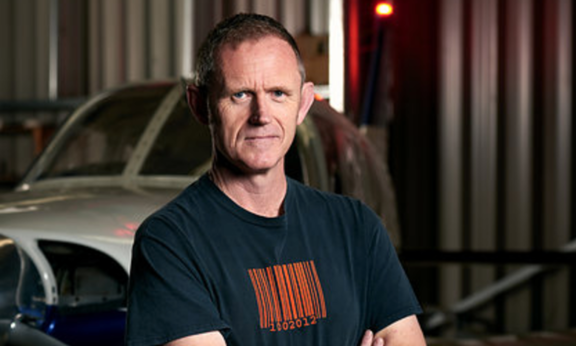 Ad man Vaughn Davis helped to turn the ‘Orange Guy’  - used by New Zealand’s electoral agencies at every election - into an instantly recognisable symbol to get the message across about enrolling and voting. He has worked on a number of other social issues campaigns down the years.

"There is always going to be people who - even if they have received and understood the messages - won't necessarily follow them," he said.

"If I were part of this project, I would be doing follow-up research to confirm whether people understand what we're supposed to be doing."

"There's been a lot of people giving their opinion in the media kōrero about the 'comms.'  But what people think is far less important than whether they work.

"We don't ask people if they thought a fire alarm sounded nice or whether it should have played a tune. We just check that everyone's evacuated the building. That's the job," he said.

While people have expressed concern that the 'rule breakers' this past week have suffered unpleasant online abuse, does that exposure actually serve as an effective communications tool?  Social media users who see the pile-on take place will be more aware of the rules - and the social consequences of breaching them.

He said the goal of the Covid-19 campaigns is "behavioural change" - akin to anti-drink driving and road safety messaging.

"In health, we already have plenty of experience in making messages for the whole country," he said.

He said that when slogans like "ghost chips" catch on, we "become the advertising. When we are the message, it's far more potent that anything we seen on TV, YouTube or TikTok."