Cracks in the team of 5 million?

This week the New Zealand Herald admitted a story about resentment of Auckland's Covid-19 lockdowns didn’t quite fit the facts. But it wasn’t the only heavy headline lately about divisions revealed by surveys of public opinion and sentiment. What do they really tell us? 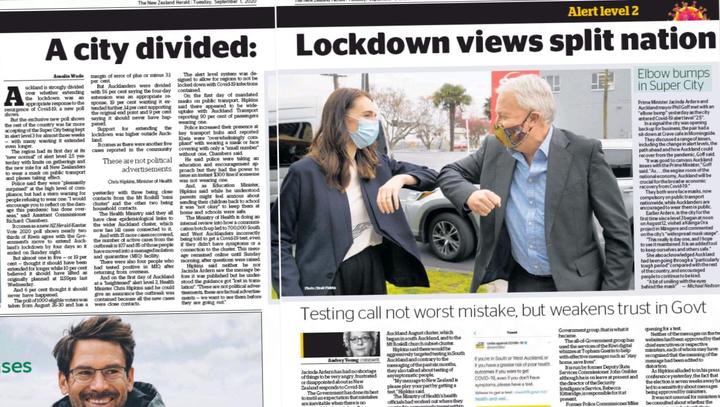 Tuesday's story in the Herald based on its new poll. Photo: photo/ RNZ Mediawatch

“Auckland is strongly divided over whether extending the lockdown was an appropriate response to the resurgence of Covid-19,” the New Zealand Herald said the day after Aucklanders came out of level 3 lockdown last Monday.

“The rest of the country was far more accepting of the Super City being kept in alert level 3 for almost three weeks — with many wanting it extended even longer,” the Herald said, reporting a Kantar poll it had commissioned which surveyed 1000 people between August 26-30.

But the difference between those inside and outside Auckland was only five per cent on that question of whether extending the lockdown by four days was the right call.

Sixty-one percent of those outside Auckland reckoned it was. In Auckland, 56 percent agreed. And the proportion of people who reckoned the lockdown should have lasted even longer was the same in Auckland and elsewhere - 19 percent.

The nationwide results broken down by age, gender and income were also strikingly similar - and only 3 percent of those polled were "don't knows".

When University of Auckland statistics professor Thomas Lumley looked at the survey - and the Herald’s report last Tuesday - his conclusion was: “No. That’s really not what the poll says”.

On Wednesday the Herald itself acknowledged that.

“The Herald accepts that there was strong support for the lockdown and its extension both in Auckland and in the rest of the country,” it said. 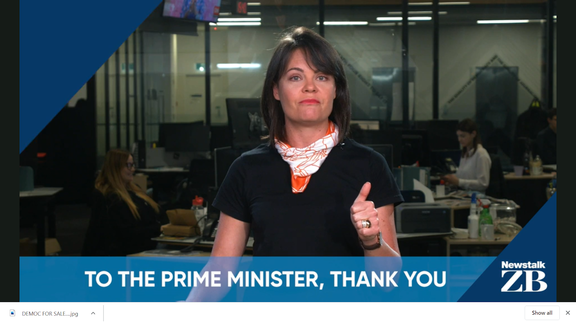 Heather du Plessis-Allan reckoned the PM had little choice but to lift the lockdown because Aucklanders were resenting the restrictions. Photo: screenshot

But that wasn't something Heather Du Plessis-Allan seemed to accept on the Herald’s sister radio station Newstalk ZB.

She told her listeners that crowds at beaches, religious services and skate parks at level 3 showed Aucklanders weren't on board with the lockdown this time round - and she pointed to a survey the Herald highlighted the previous week. 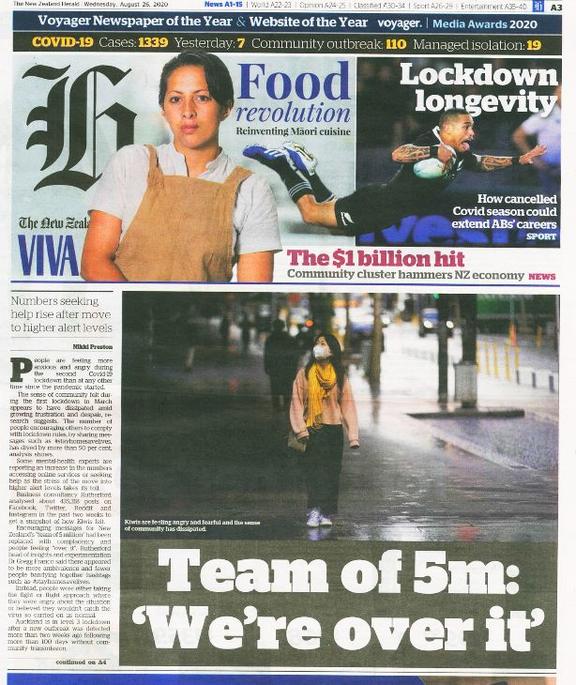 “The sense of community felt during the first lockdown in March appears to have dissipated amid growing frustration and despair,” the Herald said - citing new nationwide research.

Previous opinion polls - and the one in the Herald this week - showed most people backed the second lockdown, even if they didn’t like it, when asked by pollsters. But this survey was based on what New Zealanders themselves had been posting and sharing on social media.

Business consultancy Rutherford had analysed more than 400,000 posts on Facebook, Twitter, Reddit and Instagram in the previous two weeks to get and compared them with stuff posted during the level 4 lockdown nationwide that ended in June.

In a report headlined: Cracks are forming in the team of 5 million, Rutherford Lab found the volume of social-media conversation about Covid-19 had increased, but “negative sentiment” was up 10 percent and comment was “more intense and at times more toxic” as people vented frustration at further restrictions.

There had been a 7 percent increase in “sadness” and 8 percent drop in “optimism,” it found.

It wasn’t the first time Rutherford had drawn these conclusions from sampling our social media screeds.

At that point Rutherford found “greater anxiety about the spread of the virus and the possibility of a second level 4 lockdown” whereas there had been “more optimistic and confident conversations” online during the first lockdown between 23 March to 8 June. 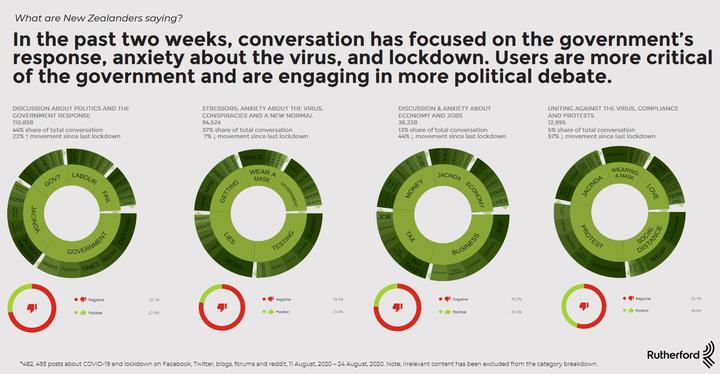 One of the main reasons, according to Rutherford Labs, was the media.

“Press coverage of the government’s response to the pandemic and politics provoked the most conversation,” Rutherfords’ research reported by the Herald last week concluded.

It reckoned 58 percent of online conversation consisted of heated debate about news stories - and in its full report, Rutherford had advice for media.

“Acknowledge the pressure consumers face and be seen to be compassionate and supportive where possible ... and avoid being opportunistic,” the report said.

“Businesses and the media may need to remain neutral during a period of high stress and avoid inflaming the debate. Businesses and the media have a responsibility to reinvigorate a sense of community and encourage the nation to unite, particularly at a moment when the government and political parties are unable to do so,” it said.

The media don’t like being told what to do by anyone  - or what their role should be in a crisis. 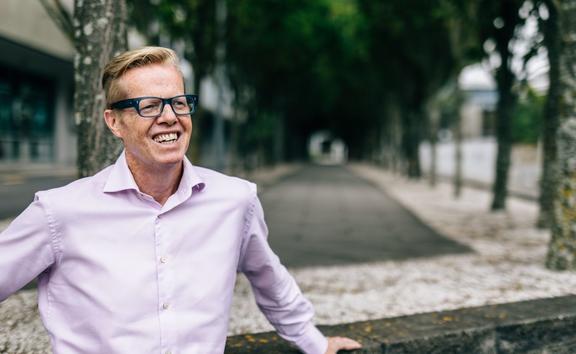 “Clearly the media have a role as the watchdog and to scrutinise and that’s a critically important role. But I think they would agree that the volume, tone and manner of the coverage can either legitimise or create doubt. What we found in our study is that helping the audience foster greater levels of care community and confidence is really important,” Rutherford's partner Graham Ritchie told Mediawatch.

“The media - like all of us - are citizens of this country and have an opportunity - even a responsibility - to ensure there is balance in the conversation. Simply put, what we saw was that 30 percent of the conversation was focused on controversy and negativity - and fewer storylines around working together in solidarity. That ... affects the way people feel,“ he said.

“Holding people to account is key - but there wasn’t the same level of conversation around solidarity and working together," he said.

“About 75 percent of New Zealanders are engaged on social media on a regular basis. The volume of users is significant and from that, statistically, you can draw conclusions which are robust enough to guide decisions,“ Graham Ritchie told Mediawatch.

But harvesting the content of those who make their posts public must amplify the voices of those projecting their anxieties on social media, while those "keeping calm and carrying on" would not register so much.

"Social media is very much the echo chamber of what we are seeing reading and hearing the news coverage and right now people are more anxious,” he said.

Amid all the fears about the wide spread of mis-information and non-expert opinion, New Zealand media might be pleased with Rutherford Lab finding their content is heavily shared and discussed in debate online.

However, Ritchie said a lot of the content iwas negative - hence the report’s headline conclusion:

“Media should take action to maintain and restore Kiwis' confidence in the economy, government, and community spirit during this second wave of COVID-19 outbreak."

“There were fewer positive stories of New Zealand is coming together. What that tends to do is skew the conversation to the other topics around controversy. It’s about trying to get the balance right,” he said.

How do analyse more than 400,000 social media posts and accurately determine the sentiment?

“What we do is we hoover up all the stuff on the publicly available social media channels. Machine-learning modelling looks at the conversational markers that suggests the topics of conversation and how people are feeling. Our tool has been tested by the Pew Research Centre in America and we have high confidence in its accuracy."