Mediawatch's midweek catch-up with Lately on RNZ National. This week in the wake of Kim Kardashian's kaning for that tone-deaf 'private island' tweet, he looks at chats with celebrities and their relatability. 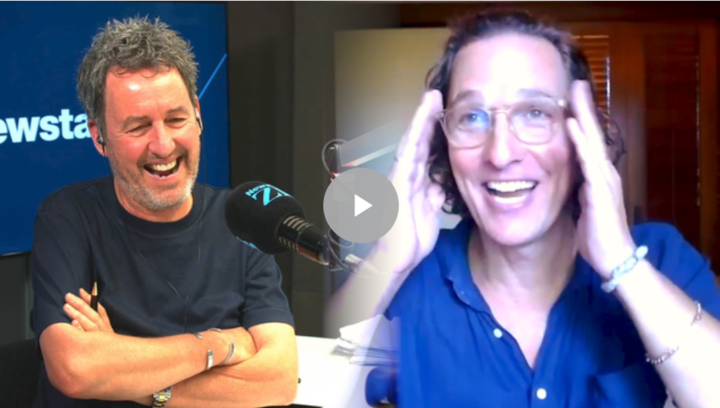 Mike Hosking asks Matthew McConaughey about his "wet dreams" (It's not what you think . . .) Photo: screenshot / Newstalk ZB

The art of the celebrity interview

Hollywood star Matthew McConaughey has a book out and has been on the media circuit bigtime.

Few outlets here would turn down the chance to chat to a genuine a-list Hollywood box office actor - and hear all the showbiz anecdotes. His new book is mostly a memoir in which he reveals a lot of things about his life and career  - and insights from 35 years of keeping a diary

But this book of his is about how to live your best life -  “Just Keep Livin’’ as his catchphrase has it.

These “philosophies can be objectively understood, and if you choose, subjectively adopted” - he says - but some are some are glib nonsense (bumper sticker’ wisdom) highlighted here by the Guardian’s Elle Hunt (a former RNZer) in a piece called ‘Zen and the art of torso maintenance.’

It’s a challenge for interviewers. You need to be polite but at least gently challenge the nonsense.

Last Thursday, Newstalk ZB’s Mike Hosking asked him about his "wet dreams" (not what you think) his other showbiz anecdotes were mostly quite boring, but being a Hollywood celeb, Hosking didn’t interrupt figuring the audience wanted to hear from the star and not him.

He was interesting though when he talked about Trump’s America and life under COVID - and his “McConagh-ssance” - turning down lucrative rom-com movies (starring as “shirtless beach guy”) for more meaningful films.

He told the same anecdote about repeatedly turning down one $14m role in a rom-com to Kim Hill on RNZ’s Saturday Morning last weekend - a chat that took up an entire hour of the show.

But she challenged him a little more on some of his overlong anecdotes, such as his McConnaghey claims to have pacified a mountain lion in a cage under the influence of peyote

But it got really interesting when he talked about his Just Keep Living Foundation in Texas - founded with the proceeds of a celeb photo of his first child.

The foundation which offers after-school care to kids from the wrong side of the tracks. They give the kids exercise goals and "nutrition goals" and community service.

Another of the lifestyle slogans in his book is: ‘Form good habits and become their slave’

“We have a gratitude circle. Kids have to say out loud say things they are grateful for,” he said.

It seemed a bit cult-ish, but press coverage of his Foundation says it does indeed do good work for hundreds of at risk youth in texas.

And the excellent Texas Monthly praised him for public service messages on coronavirus  - something he apparently doesn’t highlight.

Kim Hill also did a wide-ranging interview with musician Ben Harper - not just about his new album but about race in the US and many other topics. It was an interesting Saturday Morning

“If you’re going to get hung up on whether Stevie Ray Vaughn is the best blues player or not, you’ll be hard pressed to find somebody more soulful or better, you want to find a better harmonica player than Charlie Musselwhite? Black or white? What’s the point? You close your eyes you’re not going to know the difference.”

An even bigger star of US music with something to plug on Music 101" Bruce Springsteen.

The interview was just 16 minutes long - probably all the PR people would allow. Customarily, the big stars do a series of interviews on a prearranged schedule that must be adhered to and it is likely be part of the deal to talk about the new album. But for a music show - that's no bad thing.

Labour Day - a day off from labour?

The media has to work on Labour Day - yet Labour Day invisible in the media.

The only article I could find was in an online trade publication for HR people: New Zealand Labour Day: A brief history

RNZ had a Labour Day special to replace morning report and Nine to Noon  - but the only labour-related item on it was asking Is 'eight hours rest' outdated in today's society?

The CTU President Richard Wagstaff put out a statement saying:

"Labour Day is a time to reflect on the efforts of all working people. In 2020, more than ever, we can all see how critical the work of essential workers has been in keeping us safe from the pandemic. Essential workers have ensured our essential needs are met, whether by supermarket workers, health workers, transport workers, public servants or security guards. They’ve kept going throughout the different levels of the pandemic and done us all so proud."

It didn't make the news.

I have hosted the Labour Day Monday show in past years in RNZ when we have virtually ignored labour issues and history too (mea culpa).

May Day isn't the big deals and tradition here that it is in other countries.

And many working people probably don’t want to hear a lot about Samuel Parnell and industrial relations now or in the past on a day off anyway.

But with so many people having already lost jobs (almost all of them women) I think we should be looking at it from now on  - and taking stock. 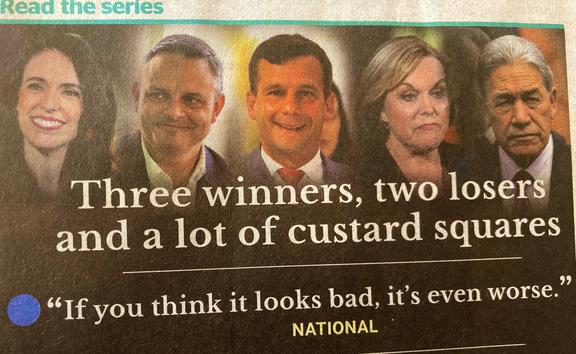 If you did have time off this labour weekend - there was good stuff to read in the papers:

Andrea Vance's series of three reports about the election in the Stuff papers over three days - subtitled 'Three winners, Two losers and a lot of custard squares" - was rewarding.

“With extensive interviews and exclusive access inside the campaigns, this is the inside story of how some of the biggest names in politics were chewed up and spat out within six weeks - and how the egos and reputations of others were swollen over the same period.“

Andrea – like other reporters on the election trail – must have been stuffed by the time it was all over and getting out this series would have been a huge effort. But totally worth it for readers.

It was a combination of first-hand fly-on-the wall accounts of major parties campaigning – and also the techniques and tactics employed behind the scenes.

Part one made liberal use of National Party MPs (including freshly-unseated ones) unloading anonymously on the leadership of the party and the campaign over what went wrong.

Part two was about how Labour and the Greens ran their campaigns  - and part three the contrasting  fortunes of Act and NZ First.

People wondering how Act went from 13,000 votes in 2017 to 8 per cent and 10 MPs should read last Monday’s concluding part in the series.

It was lavishly illustrated with candid images by Stuff photographer Iain McGregor.

Over at the Weekend Herald, Matt Nippert produced an epic account of the downfall of UK-based Kiwi tycoon Eric Watson: From penthouse to prison cell

I read 500 pages of tax and civil dispute rulings, and a couple of thousand clippings, so you don’t have to. From playboy to prisoner: The definitive story of Eric Watson. https://t.co/CETHlfeNdI