Vote-chasing political parties push policies on big ticket issues like tax, health and education in the run-up to an election, and plans for broadcasting and media are often left to the last minute - or overlooked entirely. Mediawatch looks at what's in parties' manifestos for media in 2020.

While broadcasting and media policies are not seen as major vote-winners by most parties, the media are important to many Kiwis and the government spends nearly a quarter of a billion dollars of their money on it each year - and rising.

And in the Covid-19 economy, where they chose to spend it could be critical.

As the country went into lockdown last March, the country’s commercial media companies went into crisis mode as their revenue dried up.

Bauer Media - the offshore owner of most of the country’s  significant magazines - tried to sell them all to the government for a dollar before closing them down and putting them on the market. The Australian owners of Stuff  - the country’s biggest publishers of news and biggest employer of journalists - did sell them all for one dollar - to the local boss here.

In April, the government responded with package to ease media companies’ costs by about $50 million. But while it promised medium-term support later in the year, it scrapped that when it seemed as though things were picking up for the media.

Meanwhile, the government’s main innovation for public broadcasting and media - a brand new public media entity to replace state-owned RNZ and TVNZ - is on hold.

Late last year, consultants were hired to report back on that before the election but that didn't happen once COVID-19 reared its economically ugly head. Reportedly, New Zealand First and its leader weren't all that keen on the plan they’d seen behind closed doors.

So  - with the election now upon us - what’s in our political parties’ manifestos for the media?

Interestingly, three of the four were former journalists.

Lee started out in newspapers before becoming a TV producer and then an MP -- and NZ First’s Jenny Marcroft was a news presenter on TV and radio  - before she went into politics.

Labour’s Kris Faafoi  - the current minister of broadcasting and digital media - was a political broadcast journalist at TVNZ as recently as 2008.

Labour's manifesto says it is committed to "further strengthening pubic media" but it has not yet released a specific media policy. 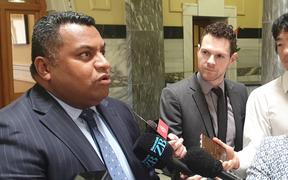 One debate participant in London pointed out to Faafoi - via Zoom chat - that people were already casting their votes.

“If we throw all our policy out at once we’d get no coverage! It is not too far away,” Faafoi replied.

He also said Labour would recognise the importance of journalism education and training and it would not ignore minor platforms like access radio and student radio -- and that the broadcasting funding agency would continue to be the key funder of local content.

He also praised the Local Democracy Reporting programme, publicly funded via NZ On Air and managed by RNZ since 2018.

The pilot programme placed eight reporters in local newsrooms  around the country to cover local politics - with more to come next year after a funding boost this year.

Lee also applauded the scheme, but she has been a fierce critic of this government handling of media in this term.

Her party also has released no specific policy on the media for voters to ponder.

Lee told Monday’s meeting a National-led government would conduct a “review to find where shortfalls are.”

RNZ does well - in her words “when both sides of the political spectrum hate them.”

“RNZ should stick to what it does well,” she said, adding that she didn’t support RNZ’s plan for a multimedia youth service. 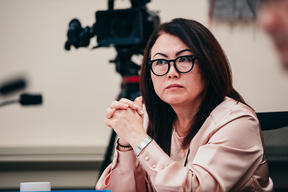 Last week, party leader Judith Collins singled out media studies as “woke stuff” there’s too much of in our schools - so presumably that won't be a big part of the party’s policy yet to see the light of day

The Greens published a media policy in July and in Monday’s debate Gareth Hughes - a former broadcasting spokesperson filling in for current one Chloe Swarbrick - said the government needed to go “faster and further” with public media.

He was also a fan of the Local Democracy Reporting service - but while that intervention is uncontroversial among political parties, it accounts for less than one percent of the entire government annual spend on media.

As Greens spokesperson in 2014, Hughes proposed a contestable fund for public interest journalism.

That’s still Greens’ policy now  - as is a non-commercial TV channel tough no budget or target date is specified.

Hughes said the Greens were concerned about status of RNZ in a proposed new public media entity.

"Protecting and supporting" Māori and Pāsifika media is part of  the party’s plan too - and also student media, though the government has never had a role in that before. 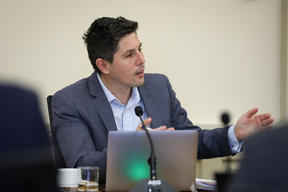 He said the Greens would push a future Labour-led government to introduce a digital services tax (a levy on digital advertising revenue) to pay for reforms.

Hughes accused coalition partner NZ First of being “a handbrake” on public media reform in the past three years.

But when Marcrft outlined NZ First media policies and aims, it echoed many of those of the Greens.

NZ First would return Māori TV's operations to Auckland CBD to “future-proof the broadcaster” and create a contestable funding pool for journalism.

Marcroft said this would cost ”a considerable amount” but couldn’t specify what that would be.

She said NZ First believed government intervention to preserve Fourth Estate journalism is justified - but it should not or offshore and private-equity owned businesses.

She also said NZ First would end “the free ride” of tech platforms Facebook, Amazon and Google and require them to pay a digital services tax and also a fee when hosting New Zealand journalism  on their platforms.

NZ First favours “de-commercialising” TVNZ, but Marcroft said the party has "reservations" about TVNZ and RNZ being replaced by one new entity. 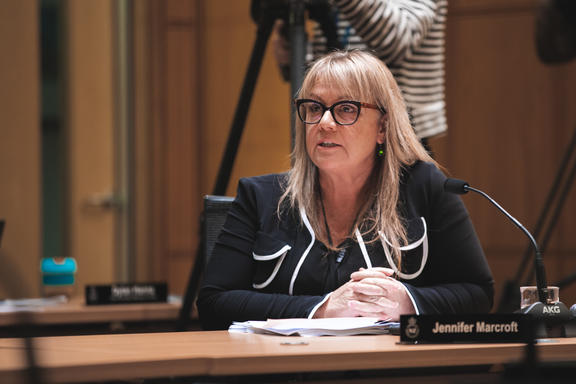 She also said NZ First did not support what she called “the full scale extravaganza” of a non-commercial TV channel.

Three of four spokespeople in Monday's debate opposed to Te Puni Kokirir’s recent proposal for broadcasting funding agency Te Mangai Paho to fund for a single Māori news service. This had already sparked criticism it would lead to a less diverse range of Māori views in the news media.

Not even Faafoi sought to defend the proposal put forward by Māori development minister Nanaia Mahuta. Don't expect that plan to re-emerge under a Labour-led government.

There’s no specific media or broadcasting policy in The Māori Party manifesto  but it does say “it is no longer acceptable for te reo words to be mispronounced over the air waves.”

The Māori Party would require the workforce at all state funded broadcasters across all mediums to have a basic fluency level of Te Reo Māori.

The ACT Party also has nothing about the media in its published policies. That’s not surprising given that it overarching aim is smaller government and less spending on non-core services.

TOP has the same policy it formed on 2017  - sell TVNZ and “use the proceeds to set up a Public Journalism Fund as part of NZ on Air.”  RNZ will be able to compete for this funding alongside other platforms,” the policy says.

TOP’s tax policy also says the likes of Facebook and Google  - which profit from sharing news but don’t create any - will “pay their fair share of tax.”

The New Conservatives and Advance NZ have no policies for the media or broadcasting.

It’s strange that for an industry and a public service in huge upheaval - and one that’s important to politicians for their own interests  - that there’s so little interest in up-to-date policies for the media.

But there’s still a week to go - and still a chance of something unexpected from one of the big two parties before the polls close next weekend.