Some people couldn’t wait to get a fast-food feed ASAP after the level 3 switch - and the media copped criticism for wall-to-wall on-the-spot coverage of the frenzy. But reporters went beyond the pent-up demand of mobile fast-food fans, uncovering breaches of level 3 rules that could have serious consequences. 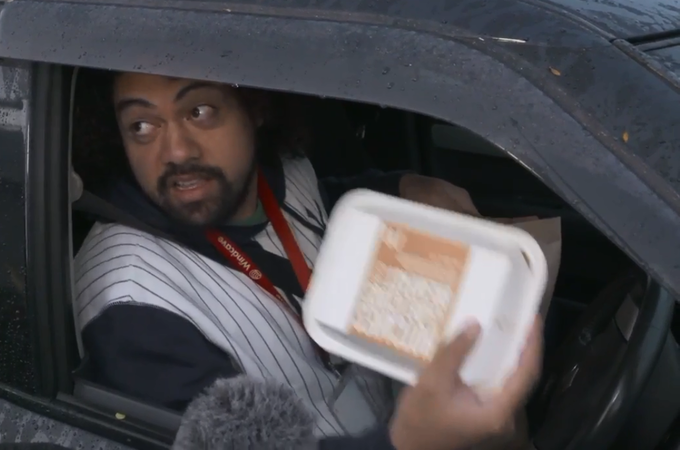 One of many fast food fans interviewed by media through the car window at the drive-thru on Tuesday. Photo: screenshot/ RNZ Checkpoint

“That’s it!”  said Tim Wilson, the host taking the late night listeners through to the level 3 switch at midnight - or ‘Threedom’ as the New Zealand Herald’s front-page called it the next morning.

It turned out the first thing some people wanted for ‘Christmas’ was a fast food feed - and they were prepared to leap out of bed before dawn and drive-through whatever it took to get it.

McDonald’s had run TV and online ads announcing they’d be back at the crack of dawn on Tuesday,  but they needn’t have bothered.

Lest we forget that burgers for breakfast would be available at the going up of the sun the first day after the Anzac weekend, the media ran that up the flagpole for them in advance.

Last week The Project on Three even mocked up a Budget-style lockdown reveal of KFC’s level 3 menu complete with political editor Tova O’Brien playing along with an election-night style analysis. 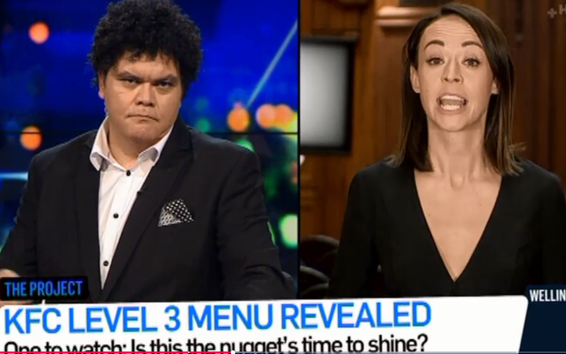 This fell flat for those who didn’t share the obsession or felt the big brands were getting ill-deserved publicity for free - possibly at the expense of local bakeries and cafes just keen to feed us all as soon as they could.

The media were in the drive-thru throngs en masse when level 3 dawned.

When TVNZ’s Wilson Longhurst bought a burger breakfast at Auckland’s Royal Oak live on Breakfast, a Stuff photographer and a Newshub crew were recording him doing it too.

RNZ was also in a motorised McDonald's queue which formed from 3am onwards in New Plymouth.

Work-bound plumber Hemi Rangi said he was after a four-burger combo because his own cooking was no good. By the time he would have been on-site three hours later, RNZ news was still running that fact in its bulletins.

News websites were all over the story with live updates on the not-so-fast food hotspots running up the longest lines.

One Mediawatch listener wrote to say said he was “gobsmacked at the media's willingness to give McDonald's massive amounts of free publicity - even in Morning Report.”

“A PR person’s dream - but an outrage as a purported news story,” he reckoned.

Some journalists had reservations too.

“(Are) some people obsessing over fast food because the media is making such a happy meal of it?” Te Ao presenter Moana Maniapoto asked.

Other reporters reckoned people shouldn’t be shamed or mocked for wanting a treat they’d missed for over a month.

And some people were really craving the return of normal life to their neighbourhoods, more than burgers.

Many of the big-name fast food stores are often run by franchisees who provide important jobs. On the day of the great re-opening, receivers were trying to nut out a deal to keep Burger King going. It has 2600 employees all around the country.

“Am I the only one who thinks it’s a sad indictment of society that so many people are queuing for McDonalds?” asked Stuff investigative reporter Blair Ensor.

When a Twitter follower pointed out his colleagues were publicising that, he replied:

"Bit hard not too when they're clogging the roads”

While the media namechecking big brands ad nauseam and running though their menus did count as free publicity, this was an event that took place all over the country and the media were obliged to cover that.

And reporters did more that just witness the release of pent-up demand among mobile fast-food fans.

Not only did this block some roads in towns and cities, it also drew crowds where proper physical distancing was not happening. Clearly newsworthy.

Breaches of best practice for contactless sales during the rush were discussed by the PM at the daily Covid-19 press conference.

Newshub at 6 on Thursday showed examples of it which would not have had come to light if reporters had not been there to see them for themselves. 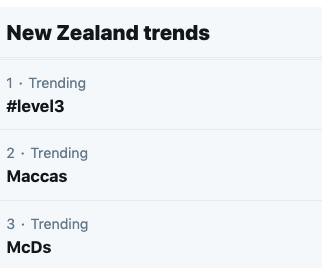 On Thursday Newshub’s Alice Wilkins led the bulletin with what you couldn;t see from the drive-thru queue. RNZ's Phil Pennington reported  over 700 complaints of workplace breaches were made in the first 36 hours under Level 3.

But the workplace regulator WorkSafe was reluctant to send its inspectors out to stop the breaches, instead relying on the Police.

Viewers and listeners would know little of this if journalists had not gone out to get the story.

In her daily COVID-19 briefing that day PM JA said authorities would follow up on breaches exposed in news reports.

Pretty clear evidence of the value of having jurnaists’ boots on the ground at the fast food frontline.

Importantly, not every reporter and camera crew covering the dawn of level 3 was picking out fast food fans and caffeine fiends with their takeaways.

People unable to convert their cash into fast food right now are an important part of the Covid-19 story too, even if there’s less of an appetite for that.