We pay tribute to New Zealand artist Fane Flaws who died on 17 June 2021, from cancer. 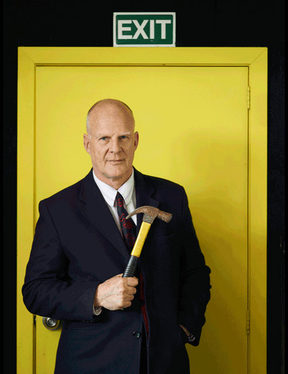 His most widely known work includes that with BLERTA, The Crocodiles, and his award-winning title sequence for TV show Radio with Pictures (find out more about Fane's life and work below).

One of the most idiosyncratic and eclectic New Zealand artists, Fane Flaws’ oeuvre spans the theatrical progressive jazz-rock of BLERTA, the nostalgic pure pop of The Crocodiles and the bizarre, Frank Zappa-like eccentricity of his one-off I Am Joe’s Music album.

More widely known for his quirky, surrealistic work as a visual artist, director of video clips for other artists and animations for the likes of iconic television music show Radio With Pictures, Flaws is the sort of ceaselessly creative spirit that doesn’t quite fit into any easy descriptive.

Born in 1951, Fane Michael Flaws started out in graphic design, but his decision to join the BLERTA bus in 1973 led to more than a decade dominated by music. Changing his name from Mike to Fane to become guitarist and writer for Bruno Lawrence’s musical commune, he spent five years touring with BLERTA and featured on both of the aggregation’s mid-1970s albums.

After BLERTA came SPATS, a group now remembered mostly for having backed the Limbs dance troupe and comedian Neville Purvis (Arthur Baysting), but which also featured Bruno Lawrence, Patrick Bleakley, Peter Dasent and Tony Backhouse. That group released a fine satirical precursor to his next group, The Crocodiles, in its 1978 song ‘New Wave Goodbye’.

In fact, SPATS morphed into The Crocodiles when American entrepreneur Kim Fowley discovered them and insisted on a name and lineup change, which meant the introduction of two attractive females, Tina Matthews (bass) and Jenny Morris (vocals). The newly-minted group’s first single, ‘Tears’ (co-authored by Flaws) was a sizable hit in 1980, climbing to No.18 on the charts, and would go on to win the NZ Recording Industry Song Of the Year, cemented by wins for Best Album and Best New Group.

But it was too late. Citing exhaustion and discouraged by disorganisation, Flaws left the group before their second album and soon moved to Australia, becoming an in-house writer for music publisher Chappell Music. Headhunted by Michael Gudinski, he secured a contract with Mushroom Records, where he reunited with Peter Dasent to work on the self-titled I Am Joe’s Music – purportedly Mushroom’s worst-ever selling album. Never issued on CD, it is utterly unique, but its failure in the marketplace marked saw Flaws’ music “career” put on temporary hold (for close to thirty years), a return to New Zealand, and a move into video.

Having directed his first video in Australia ('Proud' for expat New Zealander Johnny Batchelor's Dropbears), over the next few years he directed numerous award-winning music video clips and TV ads, and established his fingerprint in the visual arts. Flaws' videos include Tim Finn and Herbs' Parihaka', Dave Dobbyn's 'Naked Flame' and several for The Mutton Birds.

In 1999 Flaws published his first book, The Underwatermelon Man and Other Unreasonable Rhymes, which featured his illustrations linked to a CD of his own songs, performed by a wide variety of prominent New Zealand musicians. It became a musical and a full-length animated film. Now based in Napier and still collaborating with Tony Backhouse and Peter Dasent, Flaws' main musical projects are No Engine and Bend.

Reprinted with the permission of AudioCulture