Are horror fans coping better with the pandemic?

A recent study suggests that people who enjoy consuming frightening fiction may be better adapted to cope with the fear and anxiety surrounding the Covid-19 pandemic.

Dr Coltan Scrivner from The University of Chicago's Institute for Mind and Biology joined Jim Mora to discuss morbid curiosity, and why those who have it could develop better psychological resilience in times of uncertainty.

He is currently in Denmark working on the study. 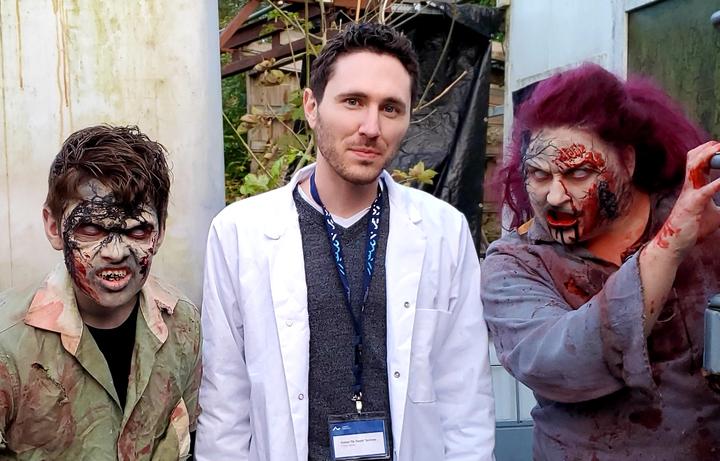 “We’re here with a project in a haunted house, so were studying how people engage with recreational fear in a haunted attraction.”

The house is a theme-building constructed to induce fear in participants and study and attempt to measure how they played with fear, which has included the use of questionnaires.

Scrivner has studied morbid curiosity, which he says is basically a motivation to learn about dangerous or threatening phenomenon or situations.

The morbidity scale – measuring the propensity for someone to be morbidly curious – was designed by Scrivner using a number of different statements that people were invited to agree or disagree with.

He asked approximately 1000 people questions and carried out a factor analysis of the results, which breaks the answers by into grouped patterns. The groups included interpersonal violence, motives of dangerous people, supernatural danger and body violation, which involves the limits of the human body.

“My academic interest in it came around the time of my PhD when I started thinking about the different cognitive paradoxes that people have. So, basically what do people do that doesn’t make sense…The thing that I latched on to was why do we seek out negative feelings or seek out unpleasant things in the world. Why do we watch violence for entertainment? Why do we go to haunted houses to scare ourselves?”

For those seeking out horror and supernatural intrigue and scares, he says there are many reasons people do this. Adrenaline junkies do it for the sheer thrill of it, able to turn that fear into

A second group he labels “white knucklers”. “These are people who will say that horror films will stick with them for days and weeks, or that they’ll have nightmares about them and yet they’ll still go and still watch the movies or the haunted houses.”

The scientists are still figuring out why they engage in these behaviours, but he says it seems this group are seeking to learn something from the experience, typically about themselves.

“Learning itself is an intrinsic motivator, so there may be something going on there feeling like you’ve learned something and that motivating you to engage with this frightening material.”

Intersection of horror and the pandemic

“Myself and colleagues have talked about this before, the idea that maybe horror fans can deal with fear and anxiety better in the real world because they deal with it in fiction all the time, and that it would be strange almost if they didn’t take something from that. Like the ability to overcome fear and anxiety and face fears.”

In March when the pandemic was announced, Google searches for the movie Contagion skyrocketed. That interested him, and the question of whether horror fans were dealing better than the general population arose.

The study was fun to do, he says, involving 300 people in the US, asking them about their experience of the pandemic and their movie genre preferences. The questions were designed to measure psychological resilience in the face of anxiety over a long period.

The results found that people who were horror fans experienced fewer symptoms of psychological distress and anxiety. Secondly, a sub-genre of horror – people who enjoy preppers movies, that included zombie films, alien invasion plots, apocalyptic films – also reported they were feeling more prepared for the pandemic.

“So basically, what seemed to be going on was these people had seen this sort of event in films so many times that it [the pandemic] didn’t catch them by surprise.”

The third finding was people who were morbidly curious tested higher for levels of positive resilience, finding interest in the unfolding developments and finding ways of enjoying life.

The study suggests that the horror buffs developed a psychological armory based on repetitive exposure to controlled fear and an ability overcome it and learn from it.

More studies will be carried out to determine whether in fact it does help people develop tools for overcoming fear and anxiety and uncertainty in the real world, he says.

“Fiction in many ways acts as a kind of simulation for these sorts of imagined worlds and possible situations and it kind of helps of rehearse what we would do.

“This is exactly what we would do if we haven’t experienced a situation – we come up with a hypothetical and think about how we would behave.

“It’s exactly what we’re doing in a movie… they help us rehearse different strategies both behaviourally and emotionally that might come up during certain kinds of situations.”