Navigation for Jack Perkins - a retrospective 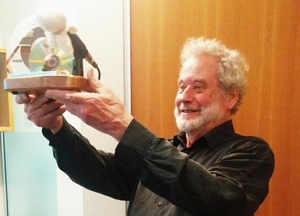 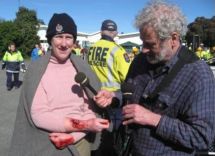 Having been appointed originally to the public service, Jack was soon working in the New Zealand Broadcasting Service, the forerunner of the NZBC, and today's Radio New Zealand.

During those decades of public service, he showed phenomenal skill in documentary-making, and amassed a body of work which profiled the way in which New Zealand has changed.

It's a remarkable story of dedication to the idea of the field-recorded documentary which saw him begin feature production in the days of unwieldy tape recorders with 5-inch reels of tape, and migrate to miniaturised digital recorders with no moving parts.

This change in technology has led to much wider use of field recording, as Jack explains in an online guide he created for Radio New Zealand staff:

Using a variety of field recording techniques, producers of Radio New Zealand features create programmes which have a vivid sense of 'place' and are often rich in ambient sound. This 'in situ' form of radio, invested with high technical and production values, strives for a realism which can activate the mind's eye of listeners, allowing them to picture a scene or event and feel part of it. In the process, listeners are often given access to people, places and events which they would otherwise never experience. 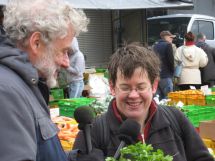 The evolution of portable recording techniques has helped to de-centralize and democratize radio. In a very real sense, the portable recorder takes radio to the people and imbues their voices and stories with an authenticity and veracity undiluted by transcription or reportage.

But it's not only a matter of being out and about - throughout all his feature and documentary work, Jack evinced a warm and empathetic interest in the individual and his or her story. Spectrum, which has been running without interruption since 1972, was set up to reflect the sound of New Zealand, and it's been doing so ever since.

Along with the programme's founder Alwyn Owen, Jack was dedicated to finding and reflecting the varied voices and stories of New Zealand in a way which complements the harder-edged style of Radio New Zealand's news programming. 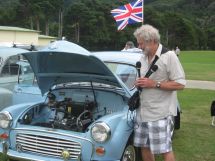 Among the twenty programmes making up the retrospective series, Jack has selected examples reflecting Spectrum’s variety: a 1975 expedition into deep Fiordland with a wild-life team where Jack thought he had killed what was possibly the last kakapo in the wild.

The recreation of the 1864 battle at Gate Pa, Tauranga, involved more than a dozen actors and a re-enactment of the actual battle involving fifty pakeha and Maori and a Black Powder club.

An account of the Queen’s visit in 1953/54 looked back at a fervour in the country for royalty which had never seen before - Southland farmers even lined up sheep on hillsides to spell out a welcome to their new monarch! And in 1974 Jack took author-politician John A Lee back to Mount Eden jail where he had been imprisoned over sixty years before for stealing a pair of boots.

Highlights of other programmes

In addition to the remarkable catalogue of Spectrums, Jack Perkins also made a wide variety of other programmes:

During the 1990s, he took 18 months to compile a nine-hour history of radio in New Zealand. The series Resounding Radio is regarded as definitive and the set is accompanied by a minute-by-minute written description of the audio - an invaluable research tool for media historians of the present and future.

For some months in 2007 Jack had been gathering material from those who were shoulder-to-shoulder with the late Sir Edmund Hillary in Nepal and on his various expeditions. The hope was that this three-hour celebration of Ed's achievements would be broadcast before he died - but that wasn't to be.

With Ed's death, RNZ decided to make over 20 hours of raw material into an obituary series and broadcast it before the state funeral. Such a tight turn-around was exceptionally challenging but totally appropriate to the occasion. Jack also took part in the live broadcast of the state funeral.

From time to time Jack has also produced one-off special documentaries on topics ranging from the aftermath of the 1981 Springbok rugby tour, and the effects of past earthquakes, to the life of pioneer aviator Richard Pearse.

In addition to his skills as a programme-maker, Jack Perkins was also a noted trainer, and his teaching had a profound effect on decades of Radio New Zealand staff and contractors. He once had a formal role in the NZBC Training Centre in the 1960s, and he was the key trainer for a special documentary-making programme run in China by Radio New Zealand in 2004.