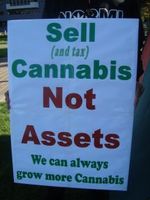 Sometime during 2012, nearly half a million New Zealanders will smoke cannabis, eat it, inhale its vapours, drink it as a tea or use it as a compress.  United Nations figures show the country has among the highest rates of cannabis use in the world. Does that mean the law prohibiting its use is not working?  And if so, what should replace it?