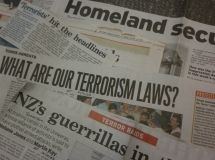 The deadline looms for the prosecution to decide on whether to re-try the four defendants in the Urewera raids trial charged with being part of an organised criminal group.

In the past week, short term surveillance legislation came to an end.

Radio New Zealand's Justice reporter, Tim Graham, looks at whether the Terrorism Suppression Act could be used again, if there are gaps in legislation and at the relationship between the police and Tuhoe.