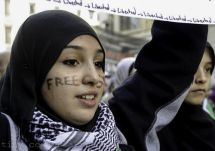 It's a year since the uprising began against the government of President Bashir al Assad in Syria.

But now a ceasefire is due to take effect in a matter of days.

The United Nations and the Arab League have negotiated the peace plan.

But over the last year,  neighbouring nations have had an influence with the Gulf States, especially Saudi Arabia and  Qatar, supporting the rebels.

Iran and its allied Lebanese force, Hezbollah, are backing the Syrian regime.

You can listen to the programme again here: