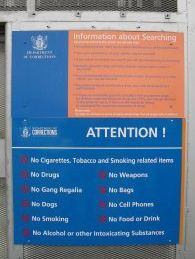 Was New Zealand right to ban smoking in prisons?

In July, this country led the world in prohibiting cigarettes, tobacco, lighters and matches for more than 8500 inmates nationwide.

But how many of those are likely to stay smoke free once they are out of jail and was it fair to deprive prisoners of the right to smoke?

Radio New Zealand's justice reporter, Tim Graham, goes behind bars to see if the  ban is a success.