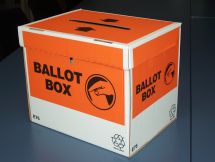 After 15 years of proportional representation, voters are to be asked if they want to retain MMP.

Its supporters insist it is a fair and transparent system, while its critics dismiss it as a recipie for back-room deals and broken promises.