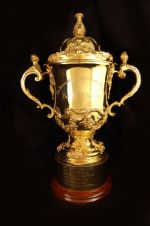 It's a year until New Zealand hosts the Rugby World Cup, one of the largest international sporting competitions in the world.

The number of overseas visitors is projected to be as high as 85,000 and the event is expected to provide a one billion dollar boost to the economy.

At the same time, the tournament is expected to run at a loss and estimates about how much money the Government has injected run in to the hundreds of millions of dollars.

So has the country over-reached itself in holding the event? What will the economic impact really be? And will Auckland's infrastructure cope?