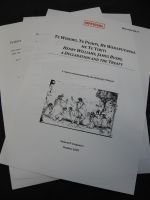 In March, the Waitangi Tribunal is set to hear the story of the country's most populous - and poorest - tribe, Northland-based Ngapuhi.

They have land claims a-plenty - but their primary grievance concerns the Treaty itself and its precursor - He Whakaputanga: the 1835 Declaration of Independence.

Photo: The front cover of a Treaty of Waitangi report called "Henry Williams, James Busby, A Declaration and the Treaty."