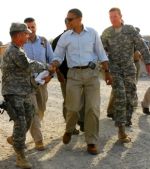 The United States has well and truly bought into Barack Obama's presidential campaign promises with voters awarding him an historically large share of the popular vote.

But faced with two wars, financial turmoil and economic recession can the untried president-elect deliver?