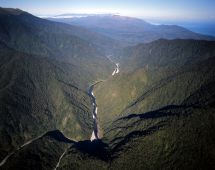 The whole issue of damming rivers for hydro power projects could be on the line at a landmark resource hearing getting underway on the West Coast.

Meridian Energy wants to build a huge dam on the Mokihinui River in Buller.

But environmentalists are vowing to defeat proposals for NZ's first major hydro dam since Clyde was opened on the Clutha River 15 years ago.

Geoff Moffett has been to the West Coast to hear more from both sides of the argument.