Making caskets that reflect the characters inside

From doughnuts to Star Trek and sail boats, one Auckland-based company is making custom caskets unlike you've never seen before. 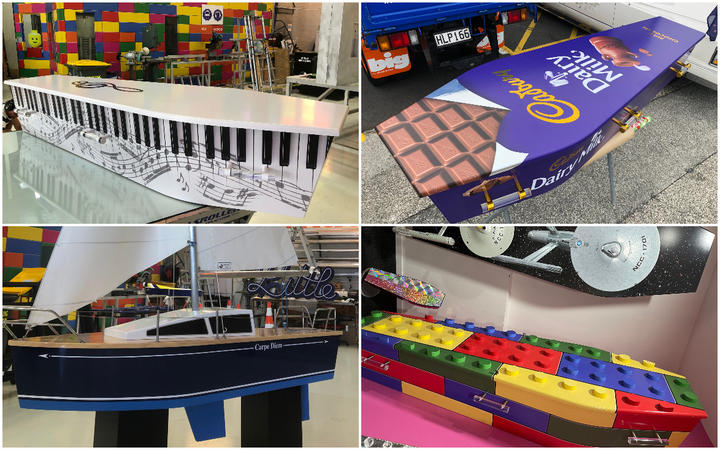 Some of the unique caskets made by Ross Hall's company Dying Art Photo: SUPPLIED/ Ross Hall

Dying Art makes unique custom caskets which reflect the people who will eventually lay inside them - whether it's a love for fire engines, doughnuts or Lego.

Owner and founder Ross Hall came up with the idea 15 years ago while writing his will.

"One of the things that came into my mind is I didn't want to go out in a brown box. So, I thought to myself I'm going to write in my will that I want a red casket with flames on it.

"A couple days later I said to my wife, 'I wonder if anybody else wants something a little bit different rather than a brown mahogany box', and we sort of looked at each other and thought about it for a while."

They laughed the idea off and moved on. But six months later the idea popped up again and this time Hall decided to do something about it.

"I did up 20 different designs and I went to the funeral directors with a little brochure and went 'hey, how about this you guys?' and they all thought I was mad."

But the idea slowly caught on and now some weeks they can get up to five orders for custom caskets.

The cost of the coffins varies depending on the complexity of the design, but Hall isn't in it for the money, instead he said it's about making people happy.

"For me, I get so much enjoyment out of making a tragic day a little bit lighter for families.

"We get some fantastic response back from families about what a difference the casket made you know, because when they looked at it they saw their loved one within there and that's what they were all about you know... They just put a whole different twist to a sad moment."

Hall said there was a team of 15 that worked on the custom coffins.

"As you can imagine, when we get an order for a casket, we have to drop everything and get straight onto it because it's a fairly quick turn around."

The caskets take about four hours to print and cover and for more intricate work it can take a couple of days.

"We've had custom designed handles which are clear acrylic so that we can put those handles on the caskets and it doesn't cover up the graphics."

Ross delivers his custom-made caskets in style in a 1991 Cadillac hearse that they got shipped from the United States.

After the casket is 'used' at the funeral it is either cremated or buried with the person. 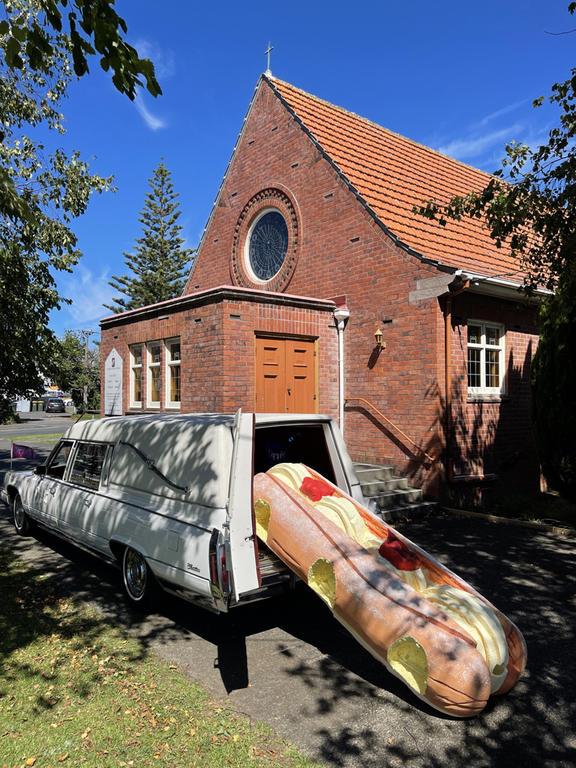 It took two days to shape the foam on this casket to make it look like a donut Photo: SUPPLIED/ Ross Hall

One of the latest caskets made by Hall and his team at Dying Art was a long-filled cream donut sculpted casket.

"The doughnut one was one that was a bit special. What we did there is we used shaping foam and we glued it to the side of a standard 6'1" casket and then we spent about two days actually shaping the cream doughnut sort of form. And then once we had a decent looking form we went back in and we painted it all with acrylic paints."

Hall said there has been a move to more celebratory funerals.

"I think people are actually starting to understand that it is a celebration of a life, it's not a loss."

He said the funeral industry was an interesting one.

"You've got to be a certain sort of a person to be a funeral director there's no two ways about it. But it's definitely changed my outlook on life because now every day that I wake up I live that day and I live that moment like it's the last one.

"We make so many caskets and we see so many people pass away and the terrible sort is once the lid goes on that's it, it's over. So as far as my attitude towards life goes this whole process has made me very thankful for waking up every morning."

"We are very passionate about making sure we use materials that are environmentally friendly."

They use pre-made MDF caskets. MDF are medium density fireboard which is an engineered wood product made from broken wood fibres combined with wax, glue and resin. They also use non-pvc self-adhesive vinyl that Hall said breaks down.

Hall said he loved his job and how his work impacted others.

"Well we've built a yacht with a full sail and jib and keel and rudder and everything... We've built a Lego casket, we've built a fire engine with wheels that rolls into the chapel and the latest one we did we built a cream doughnut which was pretty spectacular.

"They are all very special you know, I like to see people have what they want."