A man has run 654 kilometres in six days for suicide awareness. 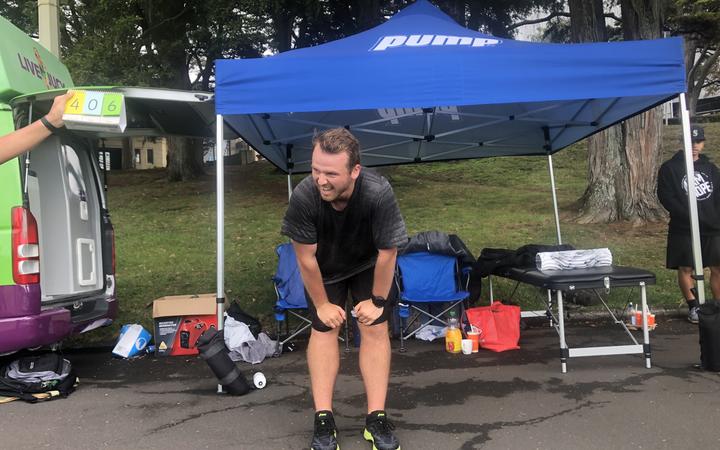 Only stopping for occasional breaks and power naps, 22-year-old Matt Fenn ran the distance in laps around the Auckland Domain.

Fenn started running last Tuesday at 6am and crossed the finish line at 11.57am on Monday morning.

Doused in champagne, dripping with sweat and in a lot of physical pain, he couldn't stop smiling.

"I'm tired ... but really good especially after the last few laps. Sort of putting the hammer down and going hard. But all of the other people out there sort of inspired me to push hard," Fenn said.

"It's been such a long time and it just became the new normal, I think my body just adapted to trying to figure it out."

Various people - strangers and friends - have come down the domain in support to run a lap with him. 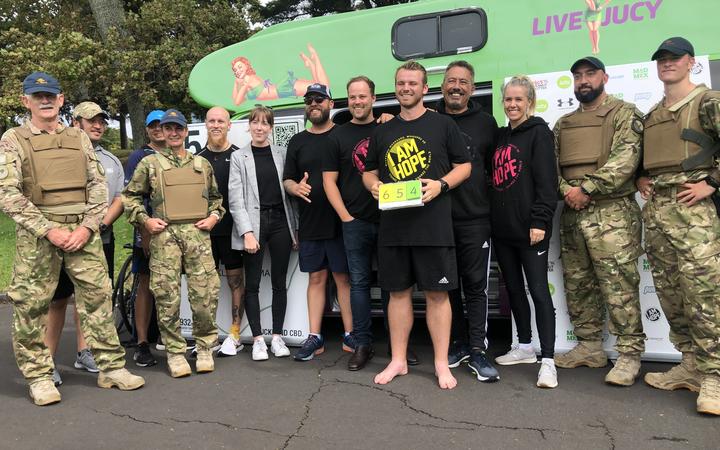 Fenn with supporter Mike King and others after completing the 654km. Photo: RNZ / Ella Stewart

Fenn has had his own mental health struggles which motivated him to complete the challenge.

"I think the biggest thing for me is trying to do something big so that as fewer people need to feel like that as possible. I feel like if you can do something you should."

It's not Fenn's first time testing his limits.

In October of last year, he completed a 24-hour long run wearing a vest weighing 24 kilograms.

One month later, he came up with his next big idea.

He phoned up Josh van Wyk, a long-time friend and mentor and pitched his plan.

"He really wanted to take something bigger and better to the public and something that would really shock people, that would grab peoples' attention on and hit it with obviously the key message of what's going on in New Zealand with suicide in particular," Van Wyk said.

"We did some research about sadly how many lives were lost last year and 654 was the number and so he decided he wanted to run that distance in honour of everyone who had taken their lives."

But the challenge was not easy.

Over the course of his run, Fenn experienced a urinary tract infection, dehydration, blisters and more seriously, a stress fracture in his right foot, and a ruptured quad muscle. 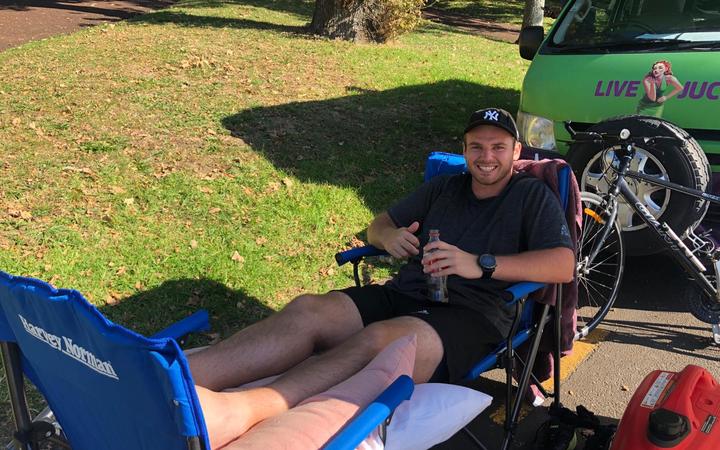 He was off to hospital to get a full check-up.

"Everything's pretty sore, it's been the feet that have been a major one. I've got a probable stress fracture in my right foot so that's been since day two, so we've done about 450km with that so yea I'm just going to get some x-rays and see what's happening," Fenn said.

"Obviously there's some external injuries but it's more the internal things, the chemical stuff and especially the come down now when my body figures out we have stopped."

Mental Health advocate and founder of I am Hope Mike King was down at the Auckland Domain supporting Fenn every day.

Fenn's idea was unique, he said.

"Everyone else who does things like this, it's always about the money but his motivation was awareness, and we've had literally thousands of people come down here over the last week saying 'where do we donate money?' and his response has been the same every time, 'we don't want your money, we want you to go home and have a conversation'," King said.

"that's just unbelievable for a 22-year-old kid to be this mature and have this much internal fortitude and such a huge heart, I mean New Zealand is a better place with him in it.

"He really is a gift to New Zealand."

Fenn said he had some big things planned for the coming year which he would not reveal just yet, but promised it would be even bigger and bolder next time.

But for now, it was all about recovering and watching some Netflix on the couch.