Descendants of Māori Chief Pomare Ngatata from Rēkohu say the recent discovery of the oldest known portrait of a Māori has opened up a new chapter into their whakapapa and the wider history of Aotearoa.

For decades, an image of a young Māori boy wrapped in a Korowai sat unattributed in the National Library of Australia until recently, when two Australian researchers linked it to the identity of Hemi Pomara (sometimes spelled Pomare).

After writing about their discovery in The Conversation, the article was shared widely online and has since sparked debate about Hemi’s life and how colonialism is being remembered today.

The Pomare whanau say they would like to see the portrait brought back to Aotearoa, Hemi Pomara’s home. 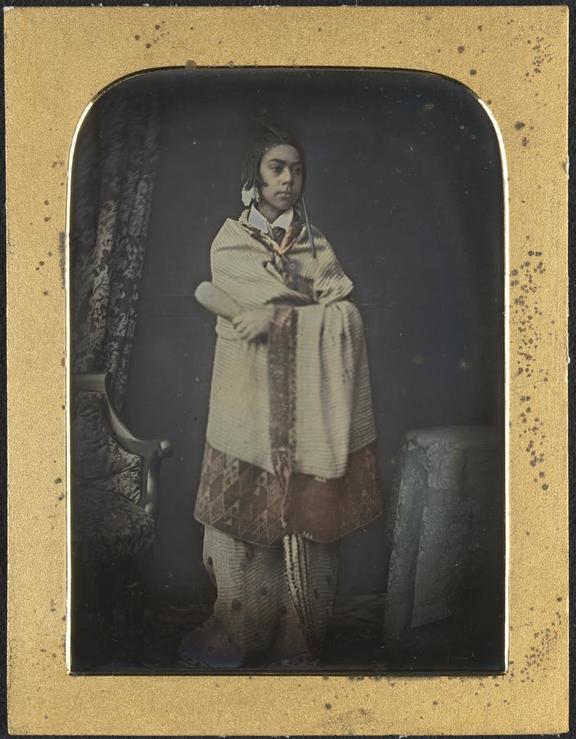 Hemi Pomara’s life attracted the attention of writers and filmmakers. He’s understood to have been taken from New Zealand as a young boy in the early 1840s, passed from person to person, displayed in London and ultimately abandoned.

It’s a story of indigenous survival and resilience but one that Miria Pomare didn’t even know existed until she read about the portrait’s discovery online last week.

“I’ve been absolutely fascinated to see this story unfold as I’m sure everybody has,” said Miria.

“I think it’s a fascinating story in its own right but one that actually raises more questions than it answers in many ways. I mean, how does a 13-year-old boy, a mokopuna of the chief of Wharekauri, end up accompanying someone like Angas, a European painter to Sydney?”

Very little is known about young Hemi Pomara and his recent identification in a 19th century portrait has sparked even more widespread fascination into his story.

Born around 1830, he was recorded as the grandson of the chief Pomara from Rekohu, or the Chatham Islands.

Like Hemi, Miria is also a descendant of Pomare Ngatata and her whakapapa is also to both Ngāti Mutunga and Ngāti Toa

Australian researchers - Elisa deCourcy and Martyn Jolly wrote that after Hemi’s family was murdered during his childhood, he was seized by a British trader who brought him to Sydney in the early 1840s and placed in an English boarding school.

George French Angas - who Miria referred to, is the British artist who spent months travelling New Zealand sketching and recording and then held exhibitions of his work in Australia and then Britain.

Angas took “guardianship” of Hemi after meeting him in Sydney, eventually taking him to London.

There he was displayed in his chiefly attire as a living tableau in front of Angas’s watercolours and other material at the Egyptian Hall in London.

He became a curiosity for the English elite and was presented in a private audience with Queen Victoria and Prince Albert.

“It’s just an incredible story that kind of defies belief in many ways,” said Miria.

She’s currently the Director of Te Wai Maori - the Maori Freshwater Fisheries Trust, has held various iwi representative roles and has worked in the field of Treaty of Waitangi claims for more than a decade.

She’s been trying to trace Hemi Pomara’s place in her whānau’s lineage since she discovered his existence.

“Looking at all the family whakapapa and the history, I’m trying to figure out who he is and exactly where he fits,” explained Miria.

“He doesn’t appear in our whakapapa anywhere which makes it pretty interesting because Angas is usually a pretty reliable source of information from those times and it would seem unlikely I would think that Pomara would be used as a name mistakenly. Especially given the link to Pomare Ngatata, Wharekauri.”

Miria suspects a couple of possible scenarios as to where Hemi may be placed within the whanau. One scenario explains his possible mixed heritage, which has been the subject of debate since the image was published.

“A potential possibility is that Hemi was the son of Pomare Ngatata’s half-sister  named Te Hekenga and her husband who was a French Whaler and I think this theory would appear to be supported by Hemi’s appearance in the photograph as a half-caste potentially with slightly fairer coloured skin.”

Hemi’s portrait, taken in 1846, shows a young man shrouded in a white, elaborately trimmed korowai with the collar of a white shirt, the cuffs of his white pants and his neat black shoes peeking out.

Until now, a portrait of Caroline and Sarah Barret, taken around 1853 was thought to be the oldest image.

Researchers deCourcy and Jolly were working on their own separate project about early photography when they found and identified Hemi’s portrait.

Jolly said Hemi’s Korowai was one of the giveaways that linked them to his identity.

“It was quite an important piece of the puzzle. It appears in the Watercolour that Angas did of Hemi in Australia and it also appears in a wood cut that was made to advertise the exhibition that he was involved in in the Illustrated London News by tracing the pattern on the inside and the outside. That was one of the links that we were able to make.”

Both Jolly and deCourcy worked with curators and researchers in New Zealand who had studied Hemi’s story to help identify him.

deCourcy said that while Hemi’s life has been told by colonial authors and artists, it’s time now for indigenous voices to tell his story.

“There are a lot of blanks and as far as we’re both aware, and we welcome anyone who can shed light on this otherwise, both of Hemi’s parents are unidentified at the moment although it is known he’s of mixed ancestry,” explained deCourcy

“We have offered up this image as a contribution to his story but we believe it is not our role to tell his story. It’s for his family and the indigenous researchers working on Hemi’s biology to take up that story now.”

Jolly says they welcomed Hemi’s whanau to get in touch,

“Every now and again there are images like this that help us understand how the past forms the present even if the past, which appears to be centuries ago, still appears to be very very close,” said Jolly.

“It would be fantastic to meet some of the people who come from Hemi’s family, it would just be really a wonderful experience I think.”

As to the future of the portrait? Miria said it’s a conversation that needs to be held with Hemi Pomara’s descendants but she would like to see it brought to Aotearoa, Hemi’s home.

“It’s opened up a whole new chapter into our history and it would be really nice for that portrait to come back to Aotearoa and be placed perhaps in the Alexander Turnbull library where a watercolour painting of Hemi Pomara by Angas also resides,” said Miria.

“It would just seem to me to be quite a fitting tribute to Hemi and also to Angas who obviously took quite an interest in him and has created the opportunity for us to be able to have the discussion we’re now having.”