Rangitāne o Wairau iwi members have called for two trustees to step down, saying the pair were involved in establishing a vineyard on an 800-year-old pā site.

Heritage New Zealand Pouhere Taonga is currently investigating whether a new vineyard has been established on a wāhi tapu, Kowhai Pā.

It is in Marlborough near the Wairau Bar, known as the earliest Māori settlement, dating back to 1280, and is also the site of a bloody battle between Ngāti Toa, led by the chief Te Rauparaha and Rangitāne o Wairau in 1827.

While the land Kowhai Pā sits on is privately owned by Montford Corporation - whose director, Haysley MacDonald, is also a trustee for Te Rūnanga a Rangitāne o Wairau - any farm work, maintenance, development or vineyard conversion on Kowhai Pā requires a permit from Heritage New Zealand Pouhere Taonga "prior to development".

Heritage New Zealand has refused to comment on whether a permit was applied for, and/or approved, until their investigation is complete.

Keelan Walker is one of 47 iwi members who sent a letter to the rūnanga on 6 February calling for MacDonald to step down from the board while the investigation is ongoing.

But he said the iwi told him they wouldn't take any action until Heritage New Zealand had completed its inquiries. 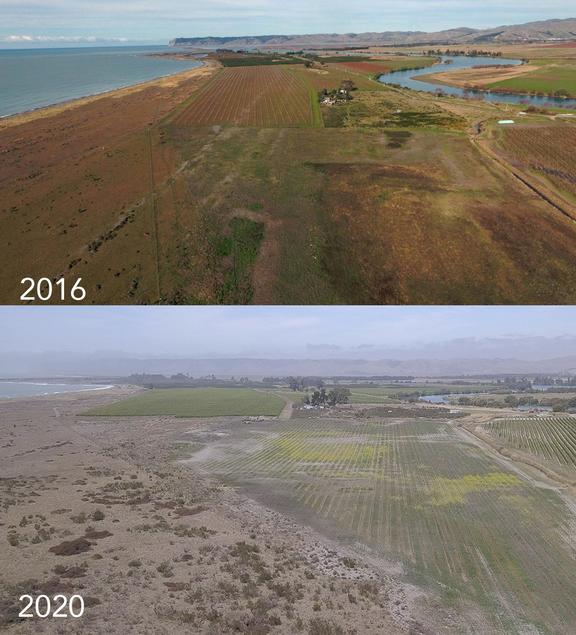 Iwi member Keelan Walker believes these photos show a vineyard has been established on the wahi tapū known as Kowhai Pā. Photo: Supplied

Walker said information had now come to light that a second trustee was the contractor who did the vineyard conversion work at Kowhai Pā, and called for the rūnanga to have that trustee step down as well.

"These people have a responsibility to reflect our values... one of them even campaigned that he was a kaitiaki for our heritage - that was the current landowner in his campaign to become a trustee - these were the values he said he represented."

"Now it clearly shows through his actions that he doesn't, and I think he's let a lot of his own whānau down, but the wider iwi and the community down if he doesn't live up to those values."

MacDonald has not responded to RNZ's requests for an interview, and the second trustee declined to comment.

Walker said it had been tough calling out the trustees "because they're whānau".

"Sometimes the hardest thing to do is hold your own accountable."

A spokesperson for Te Rūnanga a Rangitāne o Wairau said in a statement the issue was between Heritage New Zealand and Macdonald's winery, te Pā Wines.

Ngā Pakiaka Mōrehu o te Whenua Trust will host an information day on 7 March on the iwi reserve, which borders Kowhai Pā, to teach the history of the land.

Walker said he was waiting for results of the Heritage New Zealand investigation before he considered whether to file a contemporary grievance with the Waitangi Tribunal.