The Best design awards, celebrating the top Aotearoa New Zealand designers across a number of categories, are being held tonight.

Anzac Tasker, a creative director at Designworks and lifelong free diver is a finalist for the Ngā Aho award, a yearly prize celebrating Māori design.

His entry 'Mau' is a carved wooden speargun, taking the shape of a Taiaha. A metal spear sits in a shaft along the top of the taiaha, with a karakia etched on the underside, a thick rubber band and trigger mechanism are used to fire the spear. 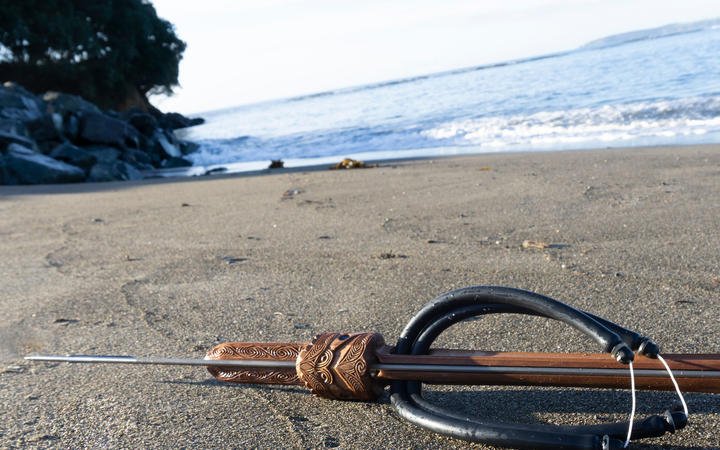 He told First Up the project started with an audit of his current speargun.

"When I had a look at what was on offer, they are all designed for utilitarian purposes, what was lacking from them which the Māori culture has always done, it is that if you have a weapon or any piece of clothing or architecture, in this case it is a weapon, it serves three purposes, it has to be technically advanced in its’ purpose, in this case as a taiaha, to strike, two, it was beautiful, the design was stunning and three the design added a narrative that advances or enhances the technical ability of it, it’s not just decorative.

"I was super keen to bring that into the weapon that I used every single day, I noticed no-one had done it before, I didn’t even know if it was possible. "

It was important for me to have a better understanding of how a taiaha worked and how I can start to bring some of those techniques into enhancing my existing speargun and maintaining the integrity of the taiaha form. Mainly because of the Upoko that sits on the bottom of the taiaha, the head and we’ve sat the shaft under the head so it sits on top of the tongue so the act of the head is to spit a spear, it looks pretty deadly and works pretty well.

“The narrative is very much the relationship between Tane Mahuta and tangaroa, essentially what we’re doing is taking a piece of tane mahuta out of the domain of the forest and taking it into the realms of tangaroa to essentially kill his children.”

He explains how he got stuck in a cave whilst free-diving, running out of breath and being within 5 seconds of death.

"You’re in a domain which is not in your domain, that’s the nature of free-diving".

After this, he spoke to his uncle, an Anglican minister, about composing a karakia, to run down the side of the spear gun. “Something to speak before entering the domain of tangaroa.”

“The manaia as part of the carving connects the realms of the living and the dead, the manaia is at the back end of the spear because before you pull the trigger you look past it, as the spear is released it goes past the mania and the next thing it hits will be taking a life.

“Having those rituals as a part of the way we go about hunting is a natural expression of who we are as Māori.”