Rescued albatross on the mend thanks to Timaru locals

A white-capped albatross found caught in seaweed and being battered by waves on a Timaru beach is recovering in Dunedin after multiple people stepped up to help it.

Zena Guthrie of Zena's South Canterbury Bird Rescue told First Up she got a call from a woman, Deb Hale, who found the bird on Sunday morning. 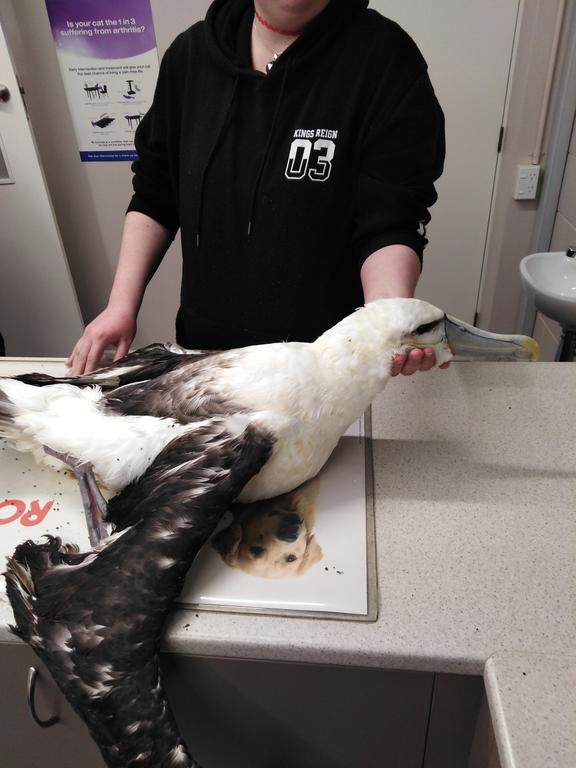 "Down at Gaps point which is one of the beaches here in Timaru ... she had come across a bird that was laying basically on the edge of the sea where it was still getting slammed by the water and it was halfway wrapped in seaweed."

"She asked if I was willing to take it which, of course, being a bird rescue ... I kind of presumed it must have been a black-backed gull."

Ms Hale then carried the large, heavy bird for 25 minutes down the beach to her car, then drove it to Ms Guthrie's house, "where we realised it was not a black-backed gull it was a white-capped mollymawk (albatross)".

"This bird was I'd say about double the length of a black-backed gull and wingspan is about 2.2 metres."

"It was so cold and wet ... I got straight on the phone to DOC (the Department of Conservation) to let them know that I had this bird and basically to find out what the next steps were."

They were advised that the albatross should be taken to Dunedin Wildlife Hospital.

"There was just no energy in it whatsoever, it wasn't trying to bite, absolutely nothing it was just, yeah, completely exhausted.

"I took it to my local vet that looks at all my birds and it was given fluids and we brought it back home and basically kept it warm, dry, quiet until we could find a ride for it down to Dunedin."

The vet luckily knew someone - another vet, who was travelling down with a horse trailer - who offered to bring the bird along in its box on the passenger seat.

"By then it had perked up a lot, it had actually started standing which was amazing because even I did not think that that bird was going to perk up at all, let alone make it down to Dunedin," Ms Guthrie said.

The mollymawk, which has been named Braveheart, is expected to make a full recovery.

"I had heard they were planning on doing some bloodtests just to make sure everything was okay internally. The other worry was basically it was being smashed by the waves so much there was a lot of damage to its feathers so ... it may not be very well waterproof now.

"It would basically drown if it got to wet, so it was a big time thing to try and make sure everything was A-okay before it gets released."