Pasifika people fearful of vaccinations after infants' deaths in Samoa

A South Auckland doctor says the death of two babies in Samoa who died shortly after receiving the MMR vaccine last year has made many Pacific people fearful of getting vaccinated, despite urgent calls by officials to do so.

The Auckland Regional Public Health Service has confirmed 100 cases of measles with a significant rise in the number of cases found in South Auckland in just the past week.

The Counties Manukau DHB where the country's largest Pacific population reside is urging locals to make sure they're protected. 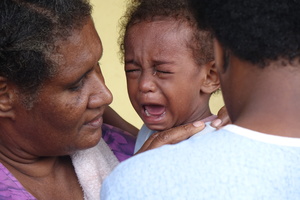 A child in vaccinated for measles in Vanuatu after Cyclone Pam. Photo: RNZ / Kim Baker Wilson

Dr Vaaiga Autagavaia, a locum in the Counties Manukau district, says many Pacific people need to be properly informed about what the risks are if they contract the virus.

"There's a lot of fear among our community about the safety of the vaccines and particularly in Samoa, with the case last year where two children died after having the vaccine," said Dr Autagavaia.

He said this is despite a recent announcement from Samoa's health ministry saying the deaths of those two babies were caused by nurses mixing the wrong liquid with the Measles Mumps and Rubella or MMR vaccine.

Dr Autagavaia said he's doing his best to assure Pasifika people that the vaccine is safe.

"It's a serious disease and we need as much protection as we can get," he said.

"Especially our Pacific population in South Auckland and Maori, should understand that everything has risks, but it is safe. And as healthcare promoters we wouldn't advise unless it was safe."

"It's the very effective defence that we've got against a very transmissable virus that will continue to be transmitted around a susceptible population unless we increase our vaccination rates," said Dr Holland.

"The vaccination is very safe and it provides the best protection."

According to the DHB, the MMR vaccine is safe for everyone except pregnant women, infants and those with weakened immune systems due to other illnesses such as cancer.

While the first Measles vaccine for babies in the country's immunisation register is scheduled at 15 months, Dr Autagavaia said there is lee-way for babies to receive the vaccine at 12 months if approved by their GP.

Those who cannot receive the vaccine are at highest risk of severe illness or complications if they get measles and Dr Autagavaia said the only way to protect them is for everyone else who can be immunised to do so.

"It's extremely important," says Dr Autagavia, "They're all vulnerable parts of our community so those that can be vaccinated, need to be vaccinated so that they're protected as much as possible.

The degree to which people can become unwell with measles - it's a terrible disease when it gets to that stage so the more we can prevent it, the better for our communities and our families." 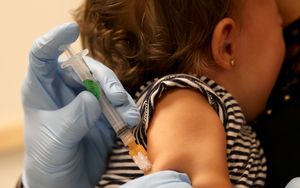 The Counties-Manukau District has the largest Pacific population in the country with many of its suburbs in the highest deprivation bracket.

Dr Autagavaia said socio-economic problems mean that just getting to a doctor for many in South Auckland is a challenge.

"Having a car in the first place often is something that a lot of our families don't have the resources for. So poverty and how our families live day to day does mean that simply going to the doctor is a challenge.

"There is support there and I think we need to encourage and help each other. If you're going to be taking your child in to get checked or to get the immunisation, then talk to your family, talk to your neighbours and say "Maybe we could go in together".

Mr Dr Autagavaia and Dr Holland are encouraging all those who may not be sure of their vaccination status to check in with their local doctor.