Refugee camp entertainer: 'It's heartbreaking for all the right reasons'

The founder of a group of entertainers who bring happiness to the world's most vulnerable children says it's vital they gain confidence of moving onto a better life through the power of laughter.

Ash Perrin, who founded the Flying Seagull project 11 years ago, told First Up laughter is the ultimate expression of confidence.

"It means that you've seen something, you feel relaxed, and you've judged it as laugh-worthy. ... It's not just what they're going through. It's also what they've picked that their future is going to be. And without confidence, and without being able to picture themselves as something like a teacher or a footballer or whatever you dream of, without that, they've really got no reason to engage in anything.

"So that play and that laughter - it somehow validates their position as a child, as important."

Everything is done with movement and sound, and a lot of eye contact. "I have a kind of private mission that I want every kid to leave thinking they were my favourite."

He said adults could learn a lot by shutting up and watching children play, especially those who are naughty. 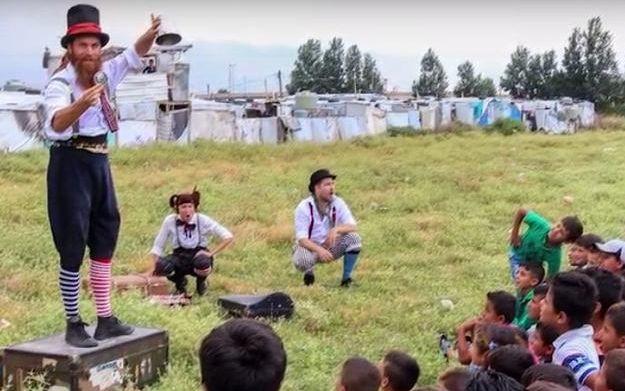 Perrin said he's always happy when he returns to a refugee camp he has visited before and finds children he has met are no longer there.

"The nice thing is that we've managed to see them along their journey. So I met a kid on the border of Syria, in Lebanon, who I then met in Lesvos in Greece, who I then met in Germany, who I then saw on Facebook had made it to England. The strange thing is, I'm happy when I turn up, and they're not there anymore. Now, I think, at least they've gone somewhere."

He recalled an experience in the Greek village of Idomeni near the border with Macedonia.

"I'd say it's one of the most shameful moments in European history since I've been alive at least, where they decided, in spite of many people having made journeys that took them years, the decision was made that they were no longer able to continue. ...Ten, 15, 20,000 people on a piece of land next to the border of Macedonia. And we went in every day, like five, six, seven shows a day for weeks and weeks and weeks." 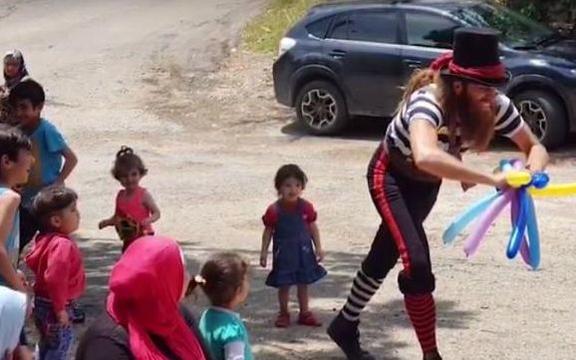 The children detected the smell of teargas and a boy insisted they follow him to safety.

"I think he was worried that we were scared. And so he called us to a circle. He said 'dayira, dayira' which is what we say and then he took a magic trick that I taught him three days before that he was rehearsing.  ...he performed the magic trick and he wasn't scared by what had happened and if he was, he didn't show it. His interest was to either entertain us or calm us and he definitely wanted to shift the atmosphere like we've been doing for weeks."

He said many refugees wanted to ensure the volunteers would come back to the camps and weren't offended by how dangerous or dirty it was. "You know, when you go past the tent and the family invite you in for tea,  and they're sorry they haven't got coffee.

"It's very beautiful. It's heartbreaking for all the right reasons like the generosity and the care and the pride. You know, you'll sit in a tent eating a bowl of hummus and some bread and the mother and the family will be so proud to be able to have guests.

"It might be a two-man camping tent that the six of you are sitting in but her pride to serve you and to feed you as a guest, it's phenomenal. And those kids are the same you know, they really want to look after you. Arabic culture, the hospitality is like nothing we've ever seen."