A pilot programme that allows Andrew Oliver, 35 - who has one of the rarest genetic conditions in the world - to live as independently as possible has turned his life around.

The change since joining the programme, Enabling Good Lives, is hard to believe for his parents: dairy farmer Ken and his wife Deirdre, who's been Andrew's only caregiver all his life while raising their three other children.

Andrew has become a minor celebrity as the man who prompted Fonterra to change its entire Te Rapa district milk tanker schedule so he could go to bed on time, with First Up's story attracting massive attention since it aired last week.

He has Fryns-Aftimos syndrome, a genetic condition so rare it's thought only about seven or eight people have it.

When he was born, Andrew's head and neck were so swollen with fluid that he lost half a kilo when the swelling went down the next day.

At 9 months old doctors diagnosed Andrew with Langer Giedion Syndrome - a rare genetic disorder which results in bone abnormalities, distinctive facial features and malformed fingers and toes.
He underwent multiple operations over the years and also developed epilepsy - he now has 5 different types of the condition.
By the time he was 6, his mental development came to a halt. But Deirdre said she was unsure if Doctors had gotten it right.

"He'd have regular visits to the pediatrician. I said 'he really doesn't fit this,' I mean, not that it matters but it doesn't fit. So then at about 13 or 14 they decided he had Cranio Labio Facio syndrome type 3."

That diagnosis relates to the abnormality around Andrew's facial features and head shape but also includes other disorders that can affect many parts of the body.

Meanwhile, Auckland geneticist Dr Aftimos wrote down his findings about Andrew and posted it on the internet.

"He got a reply from a pediatrician in Belgium called Dr Frinz whose quite a well-known geneticist and he posted back that he had this boy in Holland whose name was Andrew and he sent a photo over of him. And I showed Andrew a photo of this other Andrew and I said 'who's this?' and he said 'oh that's me' because they looked so much alike," Deidre says.

The correct diagnosis doctors arrived at is Fryns-Aftimos syndrome. The condition is so rare that the only scientific papers written on it are based on both Andrews.

Andrew is the oldest surviving person known to have it.

Struggle with the system

Being the only person in New Zealand to ever have Fryns-Aftimos syndrome has had its challenges.

"We fought a lot of battles in that regard because doors get opened for those things that are recognised," Ken says, "It's a very lonely world out there if you haven't got recognition for the person that needs assistance."

"He just doesn't fit the boxes so in terms of growing up and getting assistance, he didn't get any," Deidre says.

"It's just got to ridiculous proportions now with things," Deidre says. "I rang ACC when he broke a bone in his foot and I got told by the agent 'well, I can't talk to you, I can only talk to him' and I was like 'well, here, talk to him, he'll tell you all about fire engines. He won't tell you anything about his broken foot.' 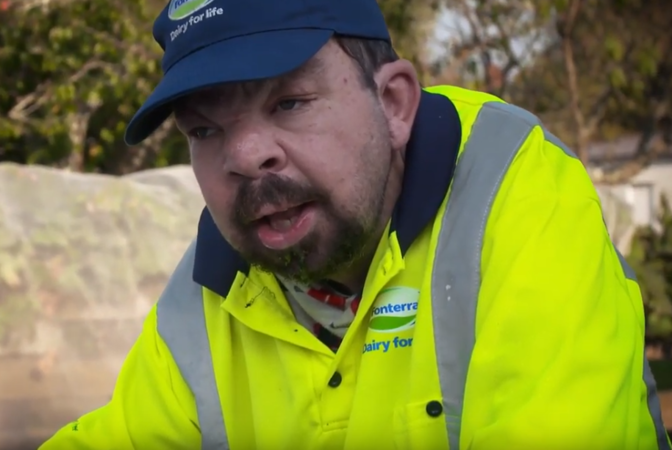 ACC refused to talk to Deirdre about Andrew's needs without his permission, so the family had to get Andrew to sign a form - even though he can barely write his full name.

"Andrew actually got called up for jury duty. We were going to let him go (laughs) and again we were really tempted to just take him and say 'you called him up'.

Deirdre now has welfare guardianship for Andrew, but it must be reviewed every three years at a cost of $2500 each time.

He takes a cocktail of drugs every day - some of which aren't subsidised because they're not on the general list.

The couple worried too that as they were getting older the need to prepare for Andy's future without them was crucial.

The Ministry of Health entitles those caring for people with disabilities four weeks of respite care but Deirdre has only ever been allowed to claim half of it.

Andrew's high needs require an extra caregiver so the government cut her entitlement to cover the extra cost.

In recent years the need to prepare for Andrew's future without them has become more pressing.

"We're becoming more and more aware of the fact that we were getting older and it gets more and more difficult as you get older and we're sort of thinking - hang on, what's next for Andy. When we're gone, where to from here," Ken says.

However, a new programme being trialled in Waikato, Enabling Good Lives, has been helping the Olivers' reach their dream of Andrew being able to live as independently as possible.

For those living with disabilities who are funded by the Ministry of Health to receive support services, the programme has now given them the choice to control how that funding is spent to meet their own needs.

For the past four months Andy has been living in his own home on his parents' farm and his funding is being used to help pay for carers to assist his aging parents in looking after him.

While it only covers some of the cost for his round-the-clock care, his parents pay the rest of the cost themselves and his mother continues to look after him a couple of days a week.

"I never wanted him to go into residential care. I like the idea that he can help to choose his carers," Deidre says. "And he can tell them what he wants to do and they will take him within reason to go and do it. 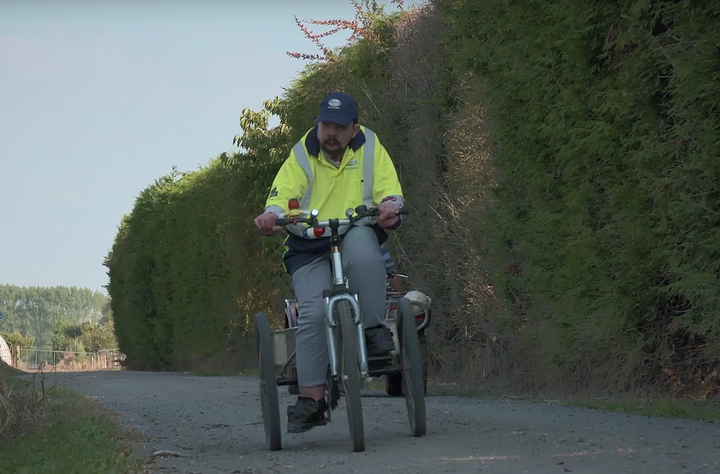 Andrew Oliver rides his bike at home, provided to him by Fonterra staff from around the world.  Photo: RNZ

"He tells the carers what meals he wants and he helps to prepare them if he's in that sort of mood. He gets out and about, he goes to the library. He's going to start swimming again soon, he loves swimming. And goes out doing crazy things like ten-pin bowling and playing mini golf and going to the movies and things that other people do in their thirties.

"We're hoping he will share his home with other special needs people that want to go flatting basically ... he does his own shopping with his carer support."

Ken says the support for Andrew to live as independently as possible is about giving him the dignity he deserves. But it also gives him the chance to adjust to when his parents may one day be gone.

"We suddenly realised how much of our lives had been just sort of taken up with caring for Andy. We don't begrudge it in one little bit. He's made our lives special in a way, but now to be able to sort of set him free and we're sort of starting to realise that maybe we've been set free as well.

"You know, I want Deirdre to be a grandmother and to enjoy her grandchildren and that's been restricted in a way because we've always had to be caring for Andy. And he got to the stage that if there was a birthday party somewhere - if he didn't want to go, that meant we didn't go.

"He's come along leaps and bounds hugely, yeah, he's his own man now I would say," she says. "The programme is around people having real choice and control in their life and that really is the success of it. Everybody is different and what that looks like for everyone is different but having choice and control is the biggest impact for people. They have a real say in what they do, when they do it and how they do it."

The programme's success means it has reached capacity in just three years. Ken and Deidre are hopeful the government will establish it around the country.

"This is people living," said Ken.