Facing Down the Bomb - a protest at Mururoa 1973

In 1973, at just 19 years of age, Anna Horne sailed with three others to Mururoa to oppose nuclear testing by France.  But rather than witnessing a bomb being detonated, she watched the skipper being beaten and detained by French commandos.

Anna observed the events through the lens of a camera and the pictures she took were smuggled out to the world, causing international outrage.

“I was up forward with David’s Nikon 35mm camera. I could hear Mary screaming as I watched her through the view-finder of the camera. I was afraid of David’s rage if I missed the shots of the French soldiers.”  As Mary Lornie’s video camera had been thrown overboard by a commando, Anna’s film was the only other record of what happened that afternoon on-board the Vega.  She says there anxious moments waiting to discover whether she had in fact captured any images.  When they were released, she felt relief that the violence had indeed been captured.  “It certainly turned the whole thing on its head and I think that was the beginning of the end really for the atmospheric testing and of course this violence hit home to people…the French were mighty pissed off with us.” 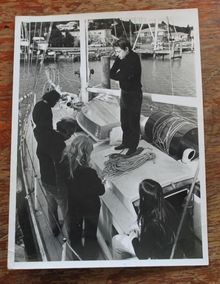 A priest blesses the Vega in Whangarei, before it sets sail for Mururoa. Image courtesy of Anna Horne

The 11.5 metre ketch Vega (Greenpeace III) was built and launched in Whangarei in 1949 and is said to have been made from a single large Kauri log by one of New Zealand’s finest boat builders, Alan Orams.  Her history with Greenpeace began in the late 1960s when she was purchased by Canadian David McTaggart, a former chairman of Greenpeace International.

He first sailed her to Mururoa in 1972 where he spent a month challenging the French for declaring over 100,000 square miles of international waters off limits to navigation for the purpose of conducting their nuclear tests.  McTaggart annoyed the French enough for them eventually to ram the ketch, causing a lot of structural damage.

But it was in 1973 that the Vega made international headlines after David McTaggart sailed back to Mururoa and was assaulted on board by French commandos and subsequently arrested.

A priest blessed the Vega in Whangarei, before it set sail. 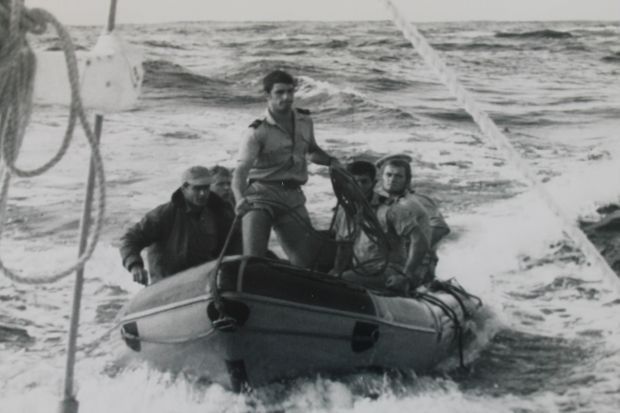 Seven French commandos on their way to intercept the Vega. Image courtesy of Anna Horne and Greenpeace International.

On the third day the Vega was in the exclusion zone, Anna says there wasn’t much wind for the yacht to make much way.  Three French vessels had been manoeuvring around slowly closing in, before a group of commandos armed with batons boarded a Zodiac and heading towards the boat.  Anna says the moment the French boarded the Vega, everything seemed to go into a kind of slow-motion.  “I’d never really used a camera much before and forced myself to stay detached – ‘take aim, press the button, wind on, take a breath’ I told myself.” 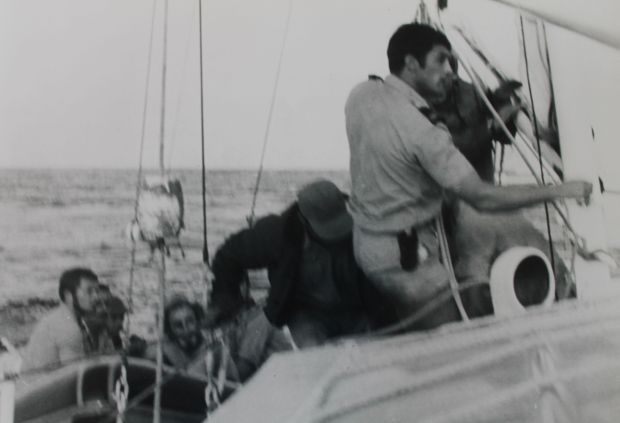 Some of the commandos on board the Vega. Image courtesy of Anna Horne and Greenpeace International.

When the commandos boarded, Nigel Ingram had been in the cabin sending an SOS message.  However, the commotion soon brought him up on deck.  Anna says as soon as he came out of the companion-way, he was grabbed from behind and beaten.  “There was this terrible moment of indecision for me – do I keep taking photos? Or is this the moment I have to hide the camera?” 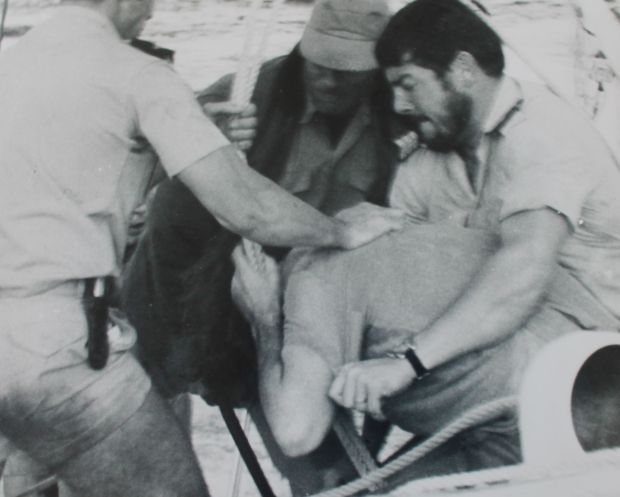 French commandoes surrounding Nigel Ingram – a truncheon used to beat him can be seen in the bottom of the picture. Image courtesy of Anna Horne and Greenpeace International.

After a dozen or so shots standing forward on the boat, Anna says she knew they were coming for her next when she saw this commando fix his gaze directly on her through the viewfinder.  “I crashed down through the forward hatch and hid the camera, just before they grabbed me too.” 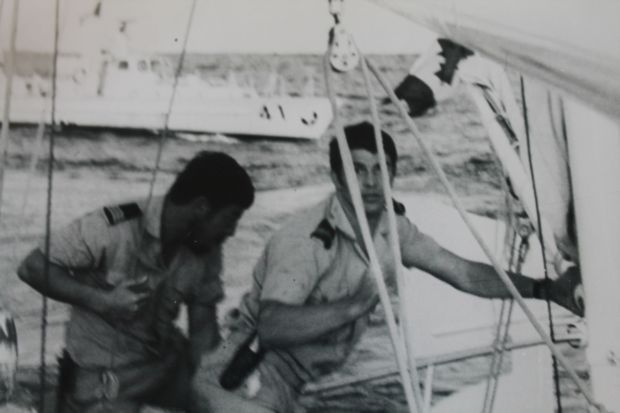 A French commando has Anna Horne in his sights. Image courtesy of Anna Horne and Greenpeace International.

Following the confrontation, the Vega was towed to Mururoa Atoll. David McTaggart was taken to Tahiti for treatment whilst Anna, Nigel and Mary locked themselves on-board overnight. Having secretly retrieved the roll of film, the trio were then taken to Hao Atoll, some 450 kilometres north-west of Mururoa. Under civilian authority, Anna was able to send a cable to her parents to tell them she was safe. “They immediately started getting on to people in Wellington…they got pretty active pretty fast…there was already stink happening.” After a week on the atoll the trio were repatriated; Nigel to England, Anna and Mary to New Zealand.

Anna’s experience became part of the case that New Zealand and Australia took to the International Court of Justice challenging the legality of the French testing programme.

On 27 January 1996, 23 years since the Vega’s protest, the last nuclear test explosion by France was conducted at the Mururoa and Fangataufa Atoll test site.  It’s believed at least 175 explosions took place in all, over 40 of them atmospheric.

The Vega was sold to cover legal costs but was later bought back by Greenpeace.  She was involved with the Peace Squadron protests against nuclear vessels in New Zealand ports in the 1980s and more recently was part of a flotilla of yachts protesting against exploratory drilling for deep sea oil off New Zealand’s west coast. 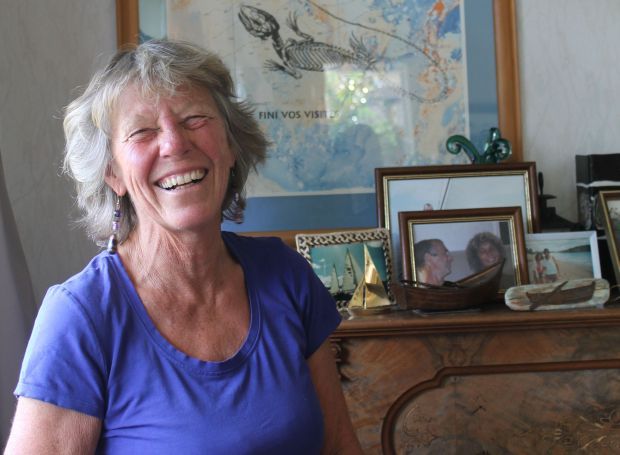 Anna was born in 1953 in Tauranga, but moved to Hamilton with her parents when she was just a few months old.  She and her siblings grew up surrounded by an extended family of grandparents, aunts and uncles and says family has always been very strong for her as a result.

She first started her activism cleaning milk bottle tops and selling them for funds, along with postage stamps and sorting jumble.  Anna says she was also influenced by her parents being Social Creditors; a philosophy she says influences her thinking even today.

Upon leaving school, Anna went to Waikato University to study English and Philosophy and it was here that she was exposed to bigger issues such as the Vietnam War.  But the starting point for her involvement in nuclear activism came when she met David McTaggart, a Canadian-born environmentalist, who played a central part in the foundation of Greenpeace International.

Anna now lives in Whitianga and is concentrating on being an activist in her own community.  She is currently working as the campaign manager for Green MP Catherine Delahunty.

Listen to the full documentary