Brent Hansen: 'Live Aid was 16 hours of guessing what happened next'

Don Hutchings never liked the title ‘Mr Telethon’ but for more than a decade that was exactly who he was.

He helped introduce the fundraising television marathon to New Zealand in the early 1970s and has been stuck with the name ever since.

But after more than a decade on the job, Don decided Telethon 85 would be his last. It was a good one to go out on. Over 24 hours, New Zealanders donated more than $6 million to the Child and Youth Development Trust - a record breaking amount.

Bewildered by the amount raised and shattered after the broadcast, Don was ready for a nap - but there was no time. He had just nine days to prepare for a broadcast much bigger than any Telethon or anything this country had ever seen.

Michael Buerk was the BBC’s correspondent in Africa covering the Ethiopian famine. In October 1984, he filed a story about the 18-month-old crisis like he’d done many times before.

But this story caught fire. Pictures of malnourished children and heartbroken mothers flashed across television screens around the world. The cry of children starving to death was haunting. People were glued to their screens, watching, in Buerk’s memorable description, a “biblical famine in the 20th century.”

The situation was dire. An estimated 200,000 people had already died and up to 8 million more were at risk. Buerk called the crisis “the closet thing to Hell on Earth”.

Irish rocker Bob Geldof saw the news report and was desperate to do something.

With mate Midge Ure from the band Ultravox, Geldof wrote a charity single, then asked some of the biggest names in pop music to perform it. Recorded in one day in late November, the single was released just a few days later, in time for Christmas.

‘Do They Know it’s Christmas’ was the biggest song in the world that year. It reached the top of the charts in 13 countries and held the number one spot in the UK for weeks. Donations poured in, eventually raising millions for food and supplies for Ethiopia.

But Geldof soon found out that aid wasn’t getting very far; a cartel operating at the Ethiopian port was blocking it. Geldof needed a fleet of trucks instead and several million pounds to finance them.

His solution? A giant charity music concert, featuring the biggest bands in the world, performed simultaneously on two stages; Wembley Stadium in London and JFK Stadium in Philadelphia. Beamed through 13 separate satellites, this ‘Global Jukebox’ would be broadcast around the world.

Setting up the broadcast

Back in New Zealand, Don Hutchings had been quietly fundraising for relief and aid for the Ethiopian famine. He produced a two-hour programme called ‘Children in Crisis’ that ran weekly on TVNZ.

When Geldof’s team came knocking on TVNZ’s door in early July 1985, asking if they’d like to broadcast Live Aid, the bosses said yes. Then they turned to Don.

Brent Hansen, who was directing music TV programme ‘Radio with Pictures’ was roped in to direct the broadcast.

Live Aid was scheduled for 13 July, 1985. Don and Brent only had nine days to get ready.

Before they knew it, it was the day of Live Aid. But minutes before the show started, Brent realised something wasn’t right.

TVNZ was broadcasting the Philadelphia concert and Brent was meant to receive word from London telling him which act was on stage next.

Instead, he was being told what acts were on stage at Wembley. A 16-hour-long game of Guess That Band began.

“As soon as I recognised what was happening next I would tell the presenters in the studio and then we would cut to the pictures as soon as we could.”

The people watching at home will remember the music from acts like David Bowie, U2, Queen and Madonna. Brent remembers the technical glitches that almost ruined the entire thing.

“There was a lot of pressure on a particular repeater station in America, I think in Pittsburgh.

“The power went down regularly, so there were times in the middle of performances where everything stopped and we had to go straight into the studio and busk it until we got the feed up again.”

In the studio, the presenters had to be ready to go live at any moment. This was all new to Murray Cammick who was the editor of music magazine Rip It Up.

“There didn’t seem to be a lot of warning before breaks and obviously there were super professional presenters there, such as Tom Sharplin, and they as pro-entertainers were the best people to be doing the links between the broadcast.”

Part of Don's job was to produce small videos about the Ethiopian famine to encourage donations. These played between performances but also when the equipment in Pittsburgh failed.

“One of them, which to this day I was reluctant to play but when I did play it the boards lit up, it just went mad.

“It was a woman who had had twins and she had to give up one of her children.

“I questioned the ethics of it, but we felt that the greater good prevailed and I think we only played it twice in the show. The public related to it very well but there were so many scenes in that thing, it broke our hearts.”

Sixteen hours after it began, Live Aid ended in a mass sing-along on the Philadelphia stage. Back in Wellington, the end of the music marathon was a low-key affair.

“When Telethon finished, there were all sorts of people hugging each other and dancing and the studio was alive with joy and laughter,” said Don Hutchings.

“At the end of Live Aid, there was no audience so there’s no applause, nothing. There was just a dozen people, plus the people who worked on the show, [we] went up to the green room and there were a lot of tears actually.” 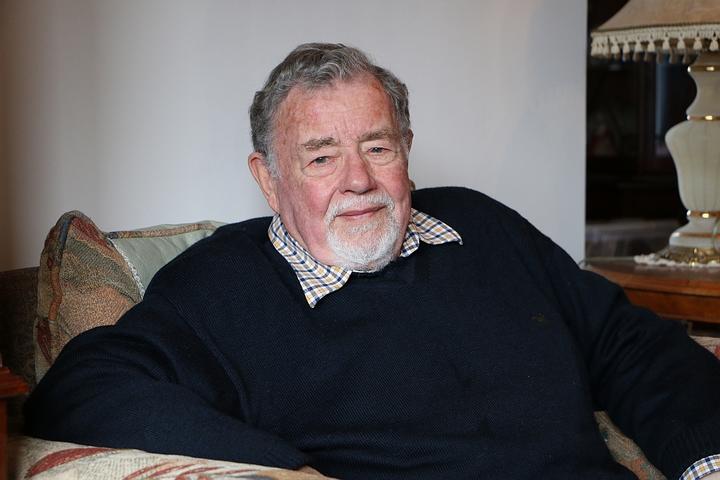 Just nine days earlier, New Zealanders raised NZ$6 million during Telethon 85. That was a huge amount, so Don and Brent didn’t know how much money Live Aid would make.

“I got a call from a supermarket operator and he said ‘Hutchings, don’t you dare ever do that again. Our take in Auckland alone is down a million and a half’.”

Live Aid raised roughly US$127 million for famine relief. But by July 1985, the hunger crisis in Ethiopia had been going on for as long as four years. It’s estimated more than a million people died as a direct result.

Live Aid was an opportunity to give collectively on a scale no-one had seen before. Don Hutchings isn't sure it'll ever happen again here.

“People are struggling much more these days to find a few extra shillings to cover off events of this nature.”

But according to the Charitable Aid Foundation's most recent report (2018), New Zealand is the third most generous country in the world.

A Giving NZ report from 2015 shows Kiwis gave almost NZ$3 billion that year. Just over half of that was made up of personal giving, so as a country, we're clearly still very generous.

We just don’t do it as big groups - think websites like Give-a-little and GoFundMe.

Broadcasting has changed over the past 34 years too.

“There are so many different ways in which live events have to become bigger and better every time.

“You have the Olympic Games and World Cups, those sort of events which happen all of the time and which really are now the big moments when everybody is focused on one particular broadcast,” Brent Hansen said.

He reckons audiences at home have lost interest in music shows like Live Aid.

“Music doesn’t garner the same ratings appeal and I think it’s harder to harness it in the same way.

“Most major artists have some charitable aspect in which they are involved in, but I think these sorts of events could happen given the right moment.”