It's entirely possible that you are alive because of one man. 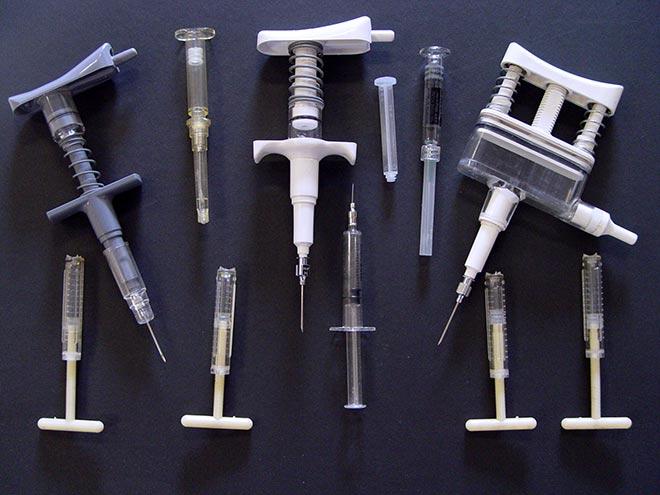 In the town I grew up in, there was a man who knew how to do things.

His name was Colin Murdoch; he was a chemist and the kind of guy people would ask to solve problems for them. He always said yes and he always got the job done.

Colin was an ideas man and an inventor. In 1952, he had a very big idea indeed.

On a flight between Auckland and Christchurch, Colin took out his fountain pen to write something down. As he took the cap off and put it back on again… inspiration struck.

Using the same fountain pen, he drew a design for what would become one of the 20th century’s most important medical inventions; the disposable, pre-filled hypodermic syringe. He was 23 years old.

In his home of Timaru, though, he was always known as the tranquiliser gun guy. 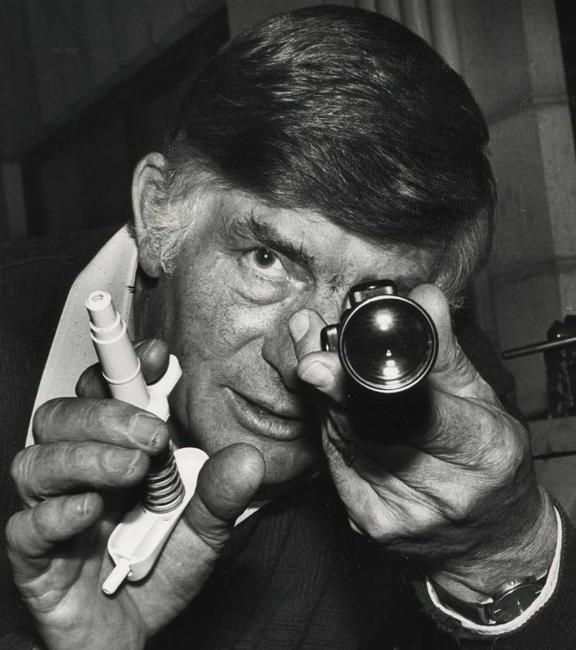 Colin Murdoch with two of his inventions. Photo: Supplied/Murdoch family.

Colin Murdoch was born in Christchurch in 1929 into a family of chemists. He must have been an interesting kid; dyslexic, ambidextrous, experimenting with chemicals, making his own gunpowder for the pistol he’d built. He wanted to be a surgeon but was steered towards pharmacy, opening his first practice in Timaru at the age of 25.

Three years later a female friend set Colin up on a blind date with a local girl called Marilyn Tregenza.  He turned up to the date at the cinema with his leg in plaster. He’d broken it skiing.

“And at the end of the performance she (the friend) said ‘oh you can take her home’,” remembers Marilyn today. “And he had a big plaster on. I’m not really sure how I got home, but I did.”

They were married six months later. Marilyn discovered Colin’s inventive bent when he moved a metal lathe into their top floor flat.

“And the two elderly ladies downstairs wondered what on earth the noise was."

Syringes in the 1950s were made of expensive glass or steel and had to be used multiple times across different patients. As a chemist and a man keen on medicine, Colin knew the risks of cross-contamination they posed, even when properly sterilised. What was needed was a single-use product, made from inexpensive materials, that could be disposed of after use. Plastic was the answer and Colin was the man.

He took his prototype to the New Zealand Health department who dismissed it as too futuristic. So Colin took out patents in Australasia and put the syringe out to market where, after a slow start, it’s fair to say, it did pretty well as a concept. 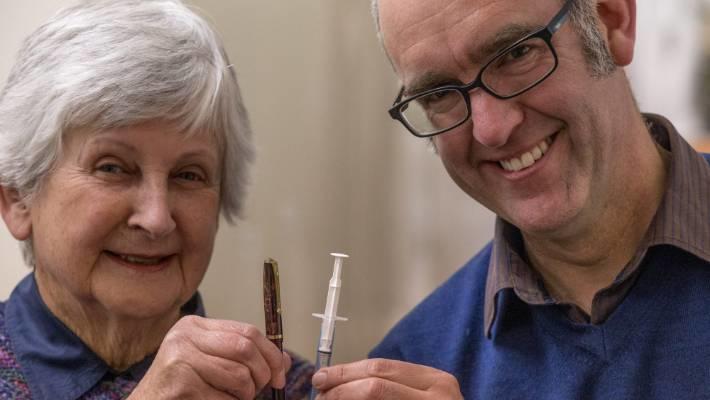 Today, about 16 billion syringes are used every year around the world and the lives of basically every newborn child, every hospital patient, every diabetic, every person with HIV or AIDS, and every intravenous drug user, were improved and on many, many occasions, saved because of Colin Murdoch’s brainwave.

If you know of a kiwi invention that more people have used, or has saved more lives, I’d be keen to hear about it.

Colin got on with improving the syringes and in 1959, he had another good idea; tranquiliser guns with a hypodermic syringe instead of a bullet. You know those animal planet documentaries where scientists drug a lion or a tiger so they can measure it or medically treat it? Those scientists owe their literal skins to Colin Murdoch.

His father once said Colin’s mind was like a corkscrew, drilling down into a problem to expose the solution. Colin had an ability to think in three dimensions, rotating a design around in his mind until he had seen it from all angles; like a human version of CAD. Having solved the problem, he’d draw it, then build it. Marilyn Murdoch said he lived by two maxims.

“Observation is the key to innovation. Never stop imagining what might be hidden in the obvious.

"And I think that’s the way he saw the world,” she said.

Colin was the kind of man who said yes to opportunity; yes to a busy pharmacy, yes to life as an inventor and entrepreneur, yes to problem solving for big international companies, even to freelance work as a TV cameraman. He also developed an interest in veterinary chemistry. Colin and Marilyn founded a company called Paxarms to make the tranquiliser guns and he travelled the world testing and promoting them in Europe, Africa, Australia and around New Zealand. Without a doubt, he was what we’d nowadays call an active relaxer. 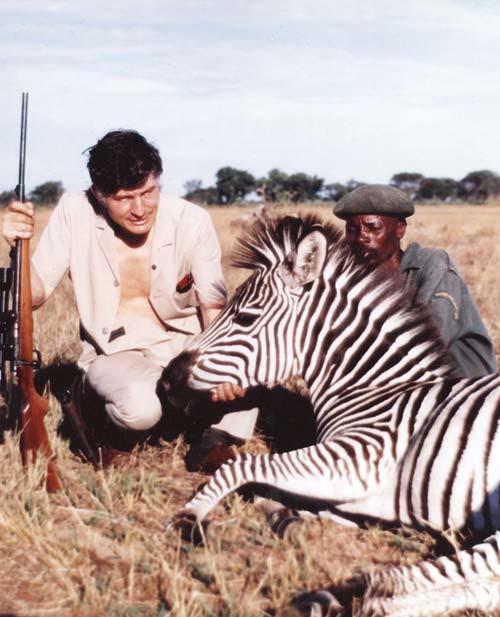 But he was also a husband to Marilyn and a father of four; Janine, Andrew, David and Robert. As he got busier and busier and said yes to more and more offers, he began spending a lot of time away from home. And even when he was at home, he wasn’t always present.

“He would often not even have time to eat with us” recalls son David. “He’d arrive home in the twilight hours and Mum used to take his meal out to the workshop.  And you’d hear machine noises right through the night. He was busy when he was at home. And often he wasn’t at home.”

Marilyn hadn’t anticipated having an absentee husband. She remembers those years as difficult; Colin might come home at lunchtime and announce he was off to Australia that afternoon. Marilyn used to warn him that if he didn’t spend more time with his kids they’d grow up not knowing him. But, she says, Colin was driven.

David Murdoch calls Marilyn the hero of this story. That’s hard to argue with. He says the kids missed Colin when he was away but with regular hunting, camping and fishing trips as a family, feels they didn’t suffer as much as their mother feared. David had a good relationship with his dad and remembers him as person who when you spoke, gave you his full attention. Of course, he wanted more time with Colin but there were bonuses to life with an inventor.

“I remember the (vaccination guns). They were great water squirters. I took mine to school.

"Dad was quite upset because they were prototypes and top secret.”

On another occasion he managed to find enough gun parts in the workshop to construct his own weapon. He took that to school, too.

With 16 billion syringes used annually, you might imagine that Colin Murdoch was rich man. But you'd be wrong. He could only afford patents for the syringe in Australasia at first and bigger players took advantage. He once told a journalist that patents give you the right to sue but not the money to do it. The family was comfortably well off, says Marilyn. She’s not sure what Colin would have considered being successful, anyway.

“I think he was pleased to see his inventions being used. And there was a certain satisfaction knowing that he’d invented them. Money hadn’t really been the primary mover.”

Over a four-decade career, Colin Murdoch developed 46 patents, including a silent burglar alarm and a childproof bottle cap and he won multiple gold medals at the World Inventors Fair. When the family sold up in the late 1980s, Colin retired and could justifiably put his feet up. Needless to say, that’s not what he did. If anything, Marilyn says, he was busier than before. 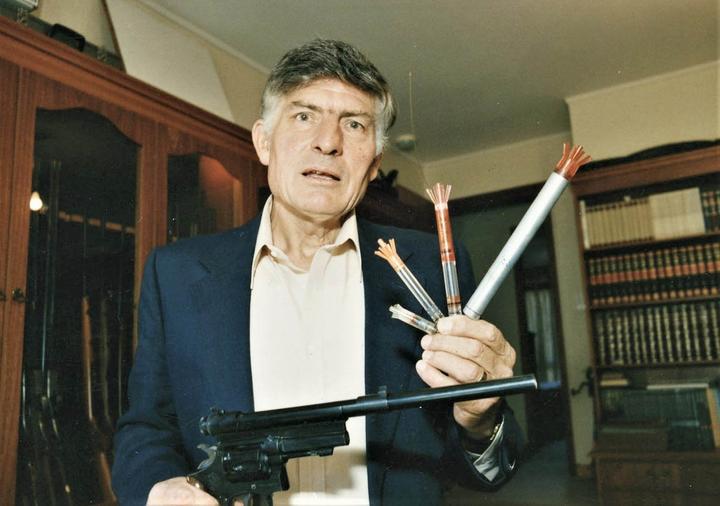 Colin Murdoch holds a tranquiliser gun and darts of his own invention. Photo: Supplied/Murdoch family.

But in 1991, far too soon, Colin’s health took a turn. Diagnosed with cancer in his paranasal sinuses, typically, he told his surgeon what was needed and then explained to Marilyn that he would lose his right eye, his cheekbone and probably the roof of his mouth. And that’s what happened.

“Life was very different from then on in.”

Colin needed to wear a device in his mouth to eat and speak and wore a dressing over his missing right eye. He was cancer free for more than a decade and recognition for the tranquiliser gun guy started finally to arrive. In 1999 Time Magazine included him as one of the 100 most influential people of the South Pacific, which is probably an understatement. His New Zealand Order of Merit arrived a year later and media interest in him began to grow.

But in the 2000s he developed oesophageal cancer and the prognosis wasn’t great. He asked his doctors to give him two years so that he and Marilyn could celebrate their 50th wedding anniversary. Colin overachieved once more, making it to 52 years.

“So he did very well,” said Marilyn.

On the 4th May 2008 Colin Murdoch died in Timaru. He was 79. His funeral was held at the large Caroline Bay Hall and it was full. The man who knew how to do everything was liked respected by many and his corkscrew mind is missed.

“People still to this day will say ‘God I miss Colin,’ says David.  “He would know what to do.”

David Murdoch is convinced Colin knew what he’d achieved during his life. But as his son, David can’t help but feel his dad never got the full measure of fame he deserved. He likens it to winning second division Lotto; nice but not the big prize. Marilyn says her husband’s fame has grown but in a weird way. When he died, obituaries were published here and around the world, including The Telegraph and The Lancet. But;

“There are still people here (in Timaru) who have never heard of him.”

David remembers a dad who was always his go-to for questions, for help and advice about life, relationships, family. A man who gave you his full attention and who knew what to do. If he could, he’d like to spend time fishing and talking with Colin. Naturally, the man who knew how to do things knew a better way to do that, too. But having shared so much of him with the world, that’s the one Colin Murdoch brainwave the family are keeping to themselves.

This episode of Eyewitness was made using audio from South Canterbury Museum.