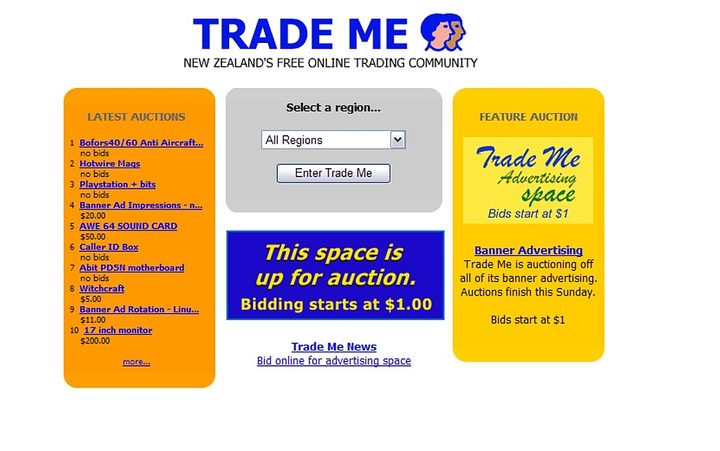 The very first Trade Me homepage from 1999. Photo: Trade Me ltd.

It kinda did, though. But not without a few obstacles in the way.

“Go back 20 years and the advice was don’t trust people online and don’t get into cars with strangers.”

This is Jon Macdonald, who today runs Trade Me, reflecting on how much things have changed since the company launched in 1999.

Back then, you flicked off your unwanted stuff in newspaper classifieds or in Trade and Exchange magazine.

Homes that actually had internet connections felt lucky to run at 56KB per second. Nowadays, most urban dwellings cruise at 5-6 megabytes.

So; dialup internet at slow speeds and very low levels of trust around online transactions. Sounds like a great time to launch an online auction site.

The legend of Trade Me is that founder Sam Morgan was struggling to find a second hand heater to buy in his local classifieds and thought: bugger this.

Jon Macdonald worked alongside Morgan back then and remembers he also had a vision of how things could be done better online.

“You could post an ad and people would see it immediately as opposed to waiting for the paper to come out on Saturday. You could post photos and a long description (of the goods); make it a far, far richer experience.”

There was a more prosaic reason, too.

Trade Me went live in March 1999 with a homepage that Jon describes as “distinctly hobbyist. “

“But it worked and it was fast and that was enough back then.”

Growth was slow initially but by 2001, 100,000 people had signed up and the site was profitable. Jon joined Trade Me in 2003. The company was four years old by then and Jon says they often acted like it.

“To some degree we ran around a bit like a kid’s hockey match.”

“We were all young and total management experience across the company was reasonably light, as well. But having said that, we did get stuff done.”

The next few years were hard graft but growth began to be exponential. Trade Me started listing cars, then property, then jobs and, by 2004, they were the fastest growing company in the country. 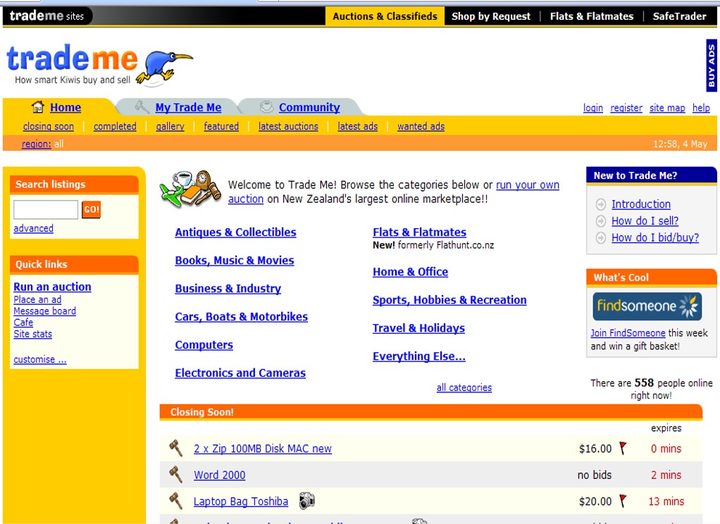 At one point, visits to the site accounted for nearly 3/4 of all internet usage in New Zealand and by 2005, 50% of all Kiwis had visited or used the site.

Other companies inevitably tried to take them on. Telecom had a go with Ferret, as did Wheedle, while OneWay managed to grab a chunk of the market and hold on. Even EBay, the biggest auction site in the world, flopped when it came here because the market was already full.

Trade Me did a lot of things right, but its greatest virtue was in doing them first. But being first means you have no paths to follow.

“Trade Me really did bushwhack its own path.”

“EBay was a business we could learn from but also, we thought we could do better than them.”

And quite quickly, Kiwis started to trust the web, just a little bit.

And once we started to trust, we began to play.

Here’s an incomplete list of the bizarre things Kiwis have tried to sell on the site over the years:

•           A washing machine that shook so violently it allegedly opened a portal into another dimension.

•           A pebble bearing the image of the Virgin Mary and a pita bread with a likeness of Christ.

And so on, and so on. Jon Macdonald’s favourite is Roofliss, an amphibious van used to cross Cook Strait. (Insert hyperlink to story)

There’ve been issues, too, though. What was once a peer-to-peer model for getting rid of unwanted stuff had changed so much the Commerce Commission insisted that regular traders be recognised as dealers and, as such, comply with the Fair Trading Act.

Posties complained about all the extra weight they had to carry to deliver items sold on the site.

And there've been a few less than honest brokers. A trawl through the RNZ clipping files on Trade Me reveals a long list of people who’ve tried to use the site for criminal means. People stung by frauds also accused the site of not doing enough to police dodgy dealers.

All sorts of people see opportunities online, I guess.

And after a while, Trade Me’s founder, Sam Morgan, saw one, too.

Early on, Morgan had jokingly offered Trade Me for sale on EBay, asking one million dollars for the fledgling site. But in 2006, just seven years after launching, Trade Me was sold to media company Fairfax for $700 million. 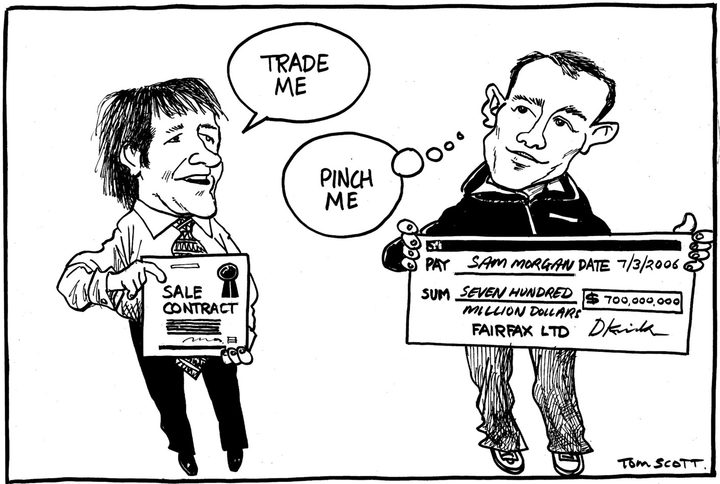 You can only hope Sam treated himself to a new heater.

A couple of years later, having earned his $200 million-plus pay-out, Morgan left Trade Me in Jon MacDonald’s’ hands. Possibly to spend more time with his heater.

“I was somewhat blindsided by that,” admits Jon MacDonald. “One day we were going down in the lift and he said…

“How do you feel about taking over running Trade Me?”

“I recovered from that surprise and was happy to sign up for it.”

In 2011, Trade Me was listed as a public company and Fairfax sold nearly half their stake, making close to $600 million.

In 2006, no one could understand why they’d paid so much for what was, after all, just a website.

But by 2012 they’d got it and the value of this Kiwi company to its owner was obvious. So when Fairfax sold off its remaining shares in 2012 to pay down debt, no one could believe that, either.

Trade Me had proved to be a real cash cow for the Aussie company, which, by some estimates, took in around 1.3 billion from the site.  Not a bad profit, really.

In 2015, Trade Me marked its 1 billionth listing. But there are challenges coming. Amazon is making its way here, for one, and in 2017, the new Labour-led government seem to be insisting that GST will be charged on any internet purchase from offshore dealers. No one seems very clear on how this will be enforced, though.

And, in the rush towards online retailing, there have been a few casualties. Clothing retailer Postie Plus didn’t adapt fast enough and went under, to re-emerge in a new form. Electronics retailer Dick Smith, once a market leader in online sales, fell behind, too, although other issues were involved in its collapse. Trade and Exchange magazine went online, then merged with a company called Sella. That website is closed now too.

The blame can’t be laid solely at Trade Me’s door as we now have a whole world of online retailers we can purchase from. Jon Macdonald points to all the small retailers that have sprung up in Trade Me’s wake. He notes too, the people who have managed to make a living online when life changes forced them to find new ways to get by.

Today, 86% of Kiwis have internet access. We buy almost anything we like online from around the world and we certainly get into cars with strangers and ask them to drive us home. Trade Me can't claim all the credit for the massive change in online behaviour since 1999.  But the company certainly played a large and early role in normalising both internet use and online trading.

And pretty clearly, in helping Kiwis to unleash their inner weirdo, too.

When Jon Macdonald joined Trade Me in its early Wild West phase, it had 15 employees and a DIY attitude. Now, as CEO to some 600 plus staff, with shareholders, a Board and any number of strings to its retail bow, he must at times look around him and wonder what happened. Jon admits he sometimes misses those early days on the frontier of online business.

“Definitely. In the bad days when you’re mired in documentation, or some of the inevitable machinery that goes around a company of nearly 650 people, the low inertia that come with working in a small group of people has its attractions. “

“There are definitely days when I miss it.”