The night the lights went out in Auckland

Auckland, 1998. After a long, hot summer, the lights suddenly go out in the city. 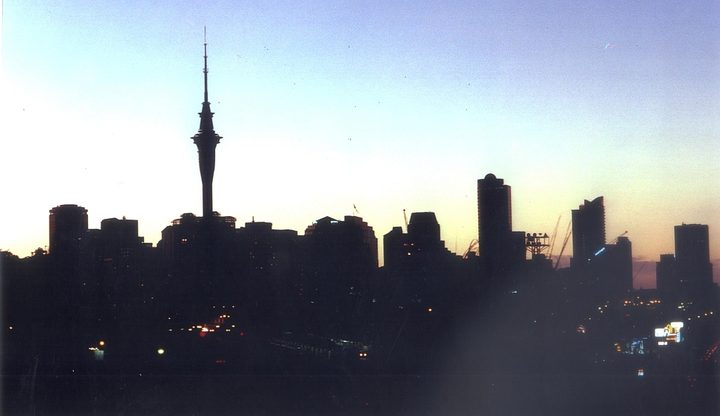 At first glance, the summer of 1998 looks a lot like the one we’ve just had.

The nation has a woman in charge and Winston Peters as her deputy while the New Zealand cricket team promises much - but delivers less. And just like 2018, the weather’s driving everyone crazy.

It would turn out to be the wettest year anyone could remember. And it wasn’t just wet; it was hot, too, with February hotter than any month on record to date.

Appliance stores couldn’t keep up with the demand for fans and air conditioners. As it turns out, the power supply to downtown Auckland couldn’t, either.

Mathew Bolland remembers that summer well. In 1998 he was the communications manager at Mercury Energy, the company responsible for supplying the CBD.

“Rather than for heating in winter, (the power supply) to the CBD became about cooling in summer.”

Mathew has been in the job for only six months and is enjoying himself. But that’s about to end.

At the time, downtown Auckland is supplied by four major power cables and one smaller one from a substation in Penrose. Two of them, the older, gas-filled models, were nearing the end of their operational life. The other two are more modern, oil-filled versions.

In late January, one of the older cables blows. The CBD is down to only three cables, but no one’s seriously inconvenienced. But then, on 9 February, its mate blows as well.

“At that point” says Mathew, “it was an issue rather than a crisis.”

Then the unthinkable happens. Unbelievably, 10 days later, one of the two, more modern, oil-filled cables also goes. With just one cable left, power supply to the city is now critically impaired. No one at Mercury can believe it, but while they’re aghast, they're not panicking. Their engineers are confident they can safely increase the load on the remaining cable while they repair the other three. The situation surely can’t get any worse.

“It was almost beyond imagination that you could lose all four.”

Friday, 20 February, 5.30pm. The last remaining major cable blows up in Mercury’s faces. The 1998 Auckland power crisis has begun. And that evening, from Mercury Energy: an extraordinary statement. “The company no longer believes it can supply the CBD with electricity.”

The area affected stretches from Stanley Street next to the Domain, to the Viaduct Basin, Fanshawe street, to Nelson Street, up Queen Street to Karangahape Road, all the way to Spaghetti Junction and as far west as part of Eden Terrace. Although only about a kilometre in length, it’s the worst possible area to have been struck. Downtown Auckland is the financial heart of both the city and country and the lights have just gone out.

Still it could have been worse. One small cable is still operating, providing roughly 20 percent of the usual supply. Not many people live in the CBD in 1998 and a lot of businesses have shut down for the weekend. At first Mercury say power might be off for a week, maybe two and, along with the Auckland City Council, they ask people to stay out of the CBD.

On Monday morning, it’s clear from the flow of traffic that the call isn’t being heeded. While some companies are trying to relocate, a lot of shopkeepers simply ignore the warnings and keep operating. Either they don’t believe what they are hearing or they just can’t afford to be closed for a week. Auckland University pushes back the start of the academic year by a week, while the central hospital announces it can only perform the most essential surgeries.

Mercury’s phone lines run red hot. Thousands of Aucklanders are trying to find out when they’ll get power back to their business, their apartment, their shop. No one knows what’s going on and no one trusts what they are hearing. Rumours fly. The worst is about a secret nuclear reactor at Auckland University that’s in danger of melting down.

Mathew Bolland knows the most important thing he can give the public is certainty. But, as the week drags on and the engineering team face setbacks, he can’t do that.

“People’s expectation of a power cut, quite rationally, is that it happens overnight and is fixed by the morning. No one would have appreciated that this involved finding where the fault was, because the cables were all underground. It just took time. You’d seal (the cable), put it back under ground and bring it back under load…and when you did that, they blew again.”

“Would we ever be able to trust these cables again?”

When the date for the restoration of power gets pushed back, anger starts to grow. That anger scares Mathew Bolland.

“Every day when you went to work, you stopped at the front gate and you had your car inspected for bombs."

“We had to evacuate the building quite regularly for bomb threats.” 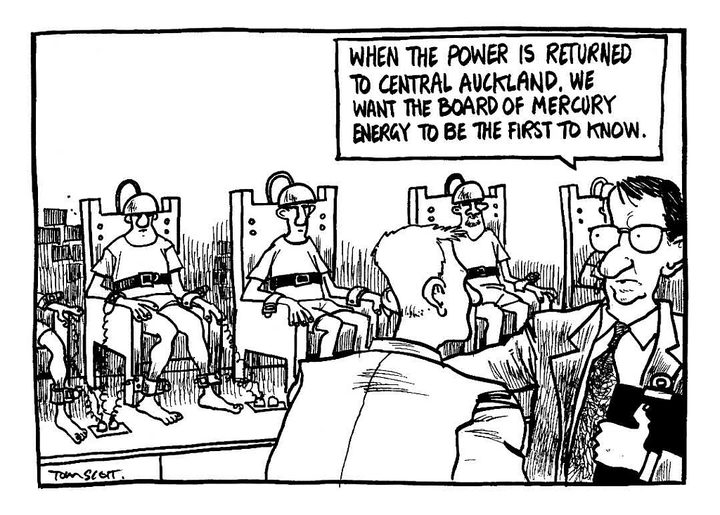 Time moves slowly. A flash flood knocks out power to south Auckland. A temporary cable is run to the downtown area, providing some relief. In the CBD, a rationing system comes into play, with some streets getting power in the morning, others at night. As the weeks go on, Queen Street becomes loud with diesel generators. In the harbour a ship provides some power, while the producers of TV shows Hercules: The Legendary Journeys and Xena: Warrior Princess offer their generators, too. The CBD empties out. Some businesses relocate to the suburbs, to other cities and some to Australia. Some just shut down and never reopen. Despite no alarms or traffic lights, the CBD is mostly crime free. Those who stay develop a weird, dark spirit of cooperation and humour. Joke – what did Aucklanders use before candles? Answer – electricity.

But when the humour fades, hard questions start being asked and fingers get pointed. Mercury Energy was formed when the old, publicly owned Auckland Electric Power board was privatised by the Labour and National governments. In one year after being privatised, Mercury went from 1200 employees to half that number.

The Dominion newspaper reveals the existence of a five-year-old report warning of the potential for failure in the old power cables. They say Mercury Energy’s Board knew about the report, but instead of replacing the cables they opted instead to build a tunnel to take the cables into the city.

Costing $100 million, the tunnel was an ambitious and slow choice, - and it wasn’t anywhere near finished.

In the rush for profits, for undertaking big projects and with an expected public offering of the company, had routine maintenance suffered? If yes, who was to blame? Various people are suggested: Board Chairman Jim Macaulay, CEO Wayne Gilbert and the network general manager Richard Gibbons.

On 27 March, five weeks after it begins, the crisis is declared over, although power outages carry on until May.

No one knows how many businesses went under or how many people lost their jobs.

Two days before the ministerial report is due to be released, Mercury Energy CEO Wayne Gilbert has a fatal heart attack while sitting at his desk. This was Mathew Bolland’s lowest moment.

“There was a drive for personal accountability, which I get. But I could see from the inside the work these people had done and the pain they felt that it had happened.”

He rejects the idea that any one person was responsible and believes that Richard Gibbons was unfairly made a scapegoat.

“Somewhere along the line, the calculations for what went wrong was made and it wasn’t right. I don’t think you can [put that] on one person.” 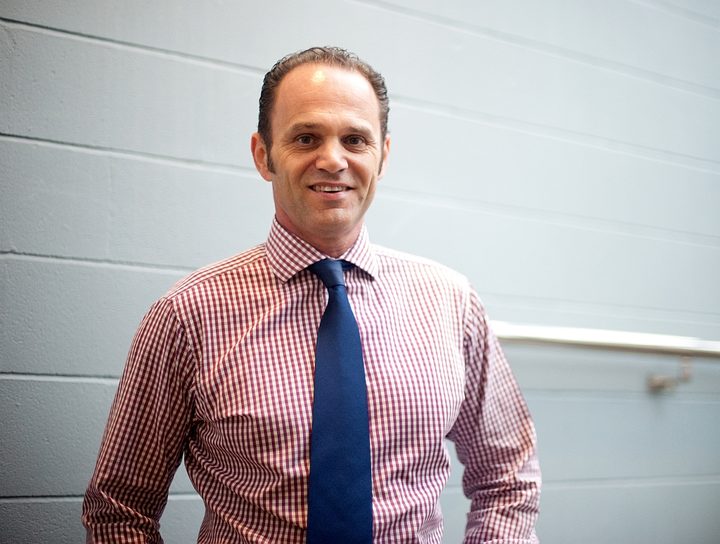 When the report is released on 8 May 1998, it is critical of both Mercury Energy and the old Auckland Electric Power Board for their risk and asset management as well as their contingency planning.

It confirmed that Mercury Energy’s reviews of the electricity network were in accordance with industry practice but that when all four cables were laid, soil conditions meant that they would be subject to overheating. Add an unusually hot summer - and bingo.

Since then, Mercury Energy has changed shape and name, becoming Vector Limited.

Mathew Bolland moved on a couple of years later and now works for phone company 2degrees. The 1998 power crisis is still fresh for him.

It is painful for others, too. Twenty years on, when asked if he wanted to take part in this programme, Richard Gibbons declined. Rightly or wrongly, at the time of the crisis people blamed him for many things. You can hardly blame him for not wanting to revisit those memories.