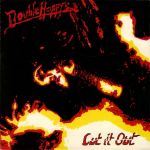 Following the dissolution of their respective groups The Stones and Bored Games, Wayne Elsey & Shayne Carter re-joined forces to create a two guitar/one drum machine "trio". Adding John Collie on drums, the Double Happys were a brash, tuneful racket that may have gone far had tragedy not struck. Shayne Carter and John Collie tell the story.

Produced by Troy Ferguson for 95bFM.