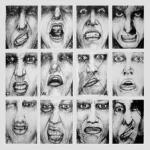 Initially released on the short-lived Furtive label in 1981, by the time Flying Nun re-released Three Songs four years later Knox's 4-track had captured some of this nation's finest classics.