A Wairarapa woman who is dying from brain cancer is begging the government to make an exception to get her UK-based sister into managed isolation on emergency grounds. 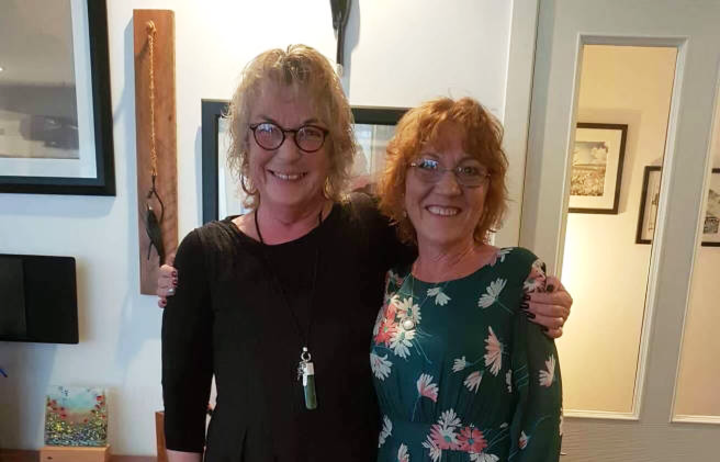 Anne Myers (left) is dying of brain cancer and is begging for an isolation spot for her sister to come home and see her before she dies. Photo: Supplied

With managed isolation filled to capacity, Kiwis overseas face heartbreak if they need to get home due to unforeseen tragedies back home.

Of the more than 800 applications that have been made for emergency allocations, only 15 have been granted - and Anne Myers' sister has not made the cut.

Myers was found to have the BRCA Gene two years ago and has had a double mastectomy, ovaries removed, chemotherapy, and radiotherapy.

About five months ago she found out that the cancer had moved to her brain.

"I did a brutal radiation that nearly killed me, only to find that the cancer had re-metastasized to my brain and that I was given months to live," she said.

Three weeks ago she found out further treatment had not worked.

Myers' health is now declining rapidly - having celebrated her niece's 21st birthday just weeks ago, she's now using a wheelchair and is on morphine every night.

She's desperate to see her younger sister, who lives in the UK with her husband and children. With managed isolation full, their only option is an emergency allocation - something they have been denied.

"I'm dying - I'm not trying to make a meal out of it, but when I hear that the West Indian cricketers can be wandering around just enjoying themselves flouting the rules - and there's people like myself out there. 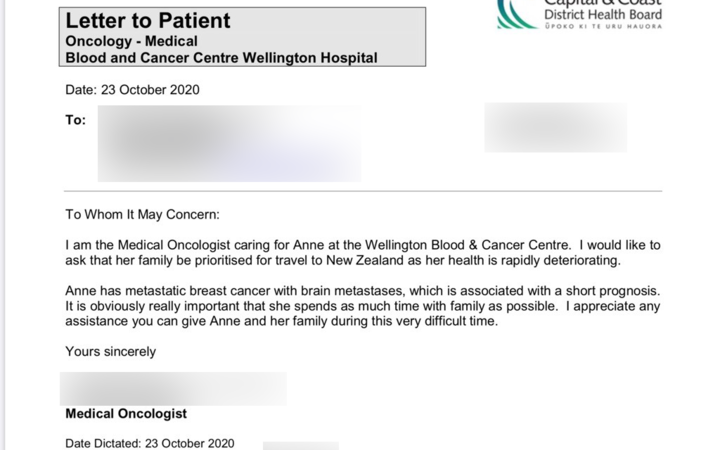 Anne Myers' oncologist has requested her family is prioritised in managed isolation as Anne is dying from brain cancer. Photo: Supplied

Myers' family is not asking for any exemptions from the quarantine process in New Zealand - they haven't booked for the January MIQ spots available because it may be too late.

"I don't really have time. And all I want is to see my sister - for us to be together. I don't think it's too much to ask."

The government has not allocated a specific number of rooms for emergency allocation applications - and in a statement said there were very restrictive criteria around them.

"This is a last resort option and the threshold is extremely high. You can apply for an emergency allocation if you are a New Zealand citizen or resident-class visa holder without a voucher who has an imminent threat to your life or serious risk to health, which requires urgent travel to New Zealand."

The emergency application process has been in place since 30 October and by 6 November there had been 885 requests, but just 15 had been approved.

Myers is not the only one struggling with the system - Holly Tasker lives in Paris and is urgently trying to get home after losing her job.

She booked her flight months ago and has been trying to secure a spot in managed isolation every day since the vouchers became available - but with no luck.

"I've seen a lot of stuff in the media about people who are in worse situations than I am ... but then also on the other hand I've seen people that have lost their jobs quite recently in the second lockdown, who've booked well after I have that have been given places."

She questioned why there was no order of priority for people who had earlier bookings to fly home, or who had more desperate situations.

House of Travel commercial director Brent Thomas said the demand for managed isolation was huge - and the heartbreak was real.

"There's certainly been people who have had family tragedies to get back for - the most obvious one of that is if they've had the death of a close relative.

"It's obviously a very stressful time at the best of times and the complexities of getting some vacancy where there is very limited space just adds to the additional pressure and anxiety."