Andrew Coster took over the role of Police Commissioner - New Zealand's top cop - overnight and says a sensible approach is needed for policing during lockdown.

Mike Bush stepped down from the role yesterday, and Coster - who was announced as the new Commissioner just last month today finished his first day on the job.

Talking to Checkpoint, he said police needed to be clear about what the guidelines were for people as the country responds to its Covid-19 outbreak.

'I'd encourage people, if they're unclear, to go to the government's Covid-19 website," he said.

You can go for a walk, you can walk past other people. The guidance says to keep a distance of two metres and from what I have observed, the vast majority of New Zealanders are doing that.

"I think we need to keep encouraging that and that's what we'll be doing. We have maintained a greater presence in some of these particular hotspots where the density tends to get too high. I'm not worried at the stage about what most New Zealanders are doing."

Police were under pressure this week after concerns not enough is being done to enforce and monitor requirements for New Zealanders returning from overseas, and that those requirements are not well enough understood.

Coster said police were using an opt-in technology which would allow people to be tracked by clicking a link in a text message from Police sent to their phones.

"They can choose whether or not to reply to that text message to confirm their location," he said, 'so it's an opt-in thing and it's done by consent." 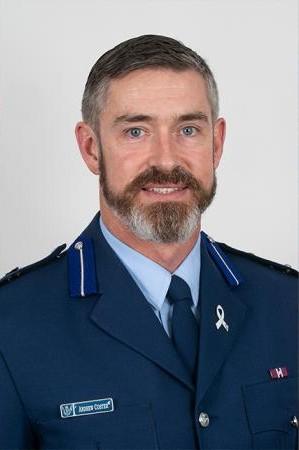 He said about 8000 people had received the messages about 50 percent of those had responded.

"We are prioritising visits to the people who have not responded. So the key message here would be if you are in self isolation having travelled and you receive a text message of this nature, please respond to it to minimise the chance that police will need to visit you to make sure we you are.

"We are also doing follow-up phone checks with people and it's enabling us to encourage them to do the right thing. And then where that doesn't work, we'll go and do a visit."

The text messages are triggered by police at random times and the recipients can then reply to confirm their location to police.

"The vast majority of people who have travelled and are in self isolation are doing the right thing. We need to recognise this will only work if the whole population understands the criticality of following the guidelines that are in place in doing it. We simply cannot be in every home and on every footpath but what we can do is check and then use what we're learning from those checks to communicate back to people and that's how we'll keep New Zealand safe."

He said a common sense approach to the Covid-19 situation was needed.

"The controls are there to achieve particular outcomes and I believe the vast majority of New Zealanders are doing the right thing because it's the right thing.

"Sometimes, it's hard to be absolutely specific about all of the situations that might apply and I believe the vast majority of people are getting that right. So we should encourage that, recognise that, and help anybody who maybe is unclear to do the right thing."

He said it was very difficult to be prescriptive about all of the different scenarios that might play out.

"We allow people to undertake exercise because that actually is healthy for people, and this is hard. People are stuck in their homes and we're only in the first week, so we need to be sensible about this.

"We need to make it realistic and achievable for people to stick by the intent of these controls. We allow people to access essential services. My suggestion would be people need to exercise locally. If you think about the distance that you're travelling to access your essential services, that's probably a pretty reasonable rule of thumb for the kind of range for exercise but we can't define for every situation what it should be and the policing approach to this is reflecting that we police by consent we need most people to think that the police approach is legitimate.

"We need to do this respectfully. We're trying to have a calm, confident, compassionate presence that encourages people to do the right thing."

Asked if Health Minister David Clark driving to a mountain bike park was a good look, given everyone has been told to exercise close to home, he said Clark had apologised.

"I doubt he needs any further conversation about that."